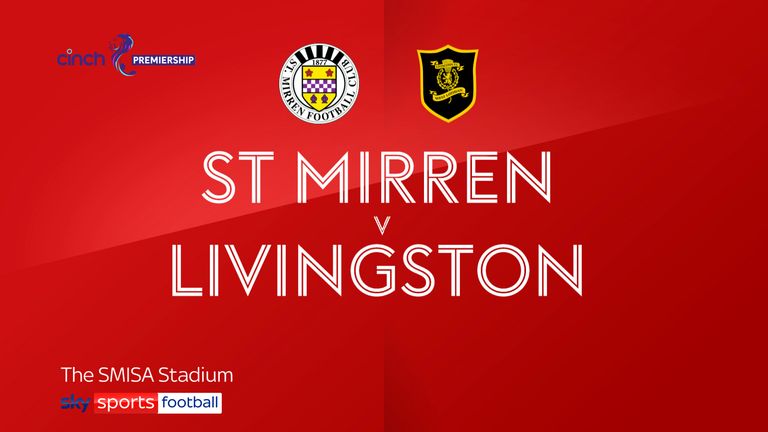 Highlights of the Scottish Premiership match between St Mirren and Livingston.

The Buddies looked set for a first win in five games thanks to Jamie McGrath's brilliant long-range shot.

But Livi skipper Devlin smashed in a driven effort one minute from time to rescue a point for his team.

St Mirren made one change from their game against St Johnstone, with Eamonn Brophy replacing Curtis Main in attack.

Livingston, in turn, made two changes from the goalless draw with Celtic. Ayo Obileye dropped out through suspension, with Sean Kelly also missing out. In came Jack McMillan and Cristian Montano.

It was the visitors who had the first chance, but Devlin's effort from an Andrew Shinnie free-kick was well held by Jak Alnwick.

Devlin then turned provider for Montano, whose header went narrowly wide from a good position, before Brophy headed over from Scott Tanser's cross in St Mirren's first opportunity.

Richard Tait took advantage of a defensive mix-up to supply Alan Power, but he scooped his shot over the bar.

St Mirren were forced into a change before half-time when Conor McCarthy could not continue and was replaced by Charles Dunne.

A brilliant long kick out from Max Stryjek then created a chance out of nothing for Livingston. Bruce Anderson teed up Odin Bailey, whose low effort was well parried by Alnwick.

Saints won a free-kick in a good position early in the second half after Brophy was fouled by Tom Parkes. The striker took it himself but struck the top of the defensive wall.

Livingston came close with their first real chance of the second half, but Montano's effort was blocked by Joe Shaughnessy.

The Colombian had a better chance just minutes later. Bailey flighted in the free-kick and Montano's header was well saved by Alnwick.

St Mirren threatened next and McGrath was not far away with a volley that drifted narrowly wide.

The Irishman, though, got his next effort on target as he gave Saints a stunning 68th-minute lead.

Tait was bundled over by Stephane Omeonga, but before referee Steven McLean could blow for the foul, McGrath had curled the loose ball over Stryjek from 25 yards.

The forward then had another attempt not long after, which was saved as the home side looked to build on their lead.

Livingston made a triple change to try to get back into the contest and, after Alnwick had made a brilliant save from substitute Alan Forrest, Devlin drilled in the loose ball from just outside the box.

St Mirren travel to high-flying Hearts next Saturday with Livingston hosting Rangers live on Sky Sports at Midday on Sunday.