Match report as Rangers come from behind to win 2-1 at St Mirren; Connor Ronan's spectacular long-range strike had given the hosts an early lead; quick-fire goals from Kemar Roofe - via the spot - and Alfredo Morelos send Rangers top of the Scottish Premiership 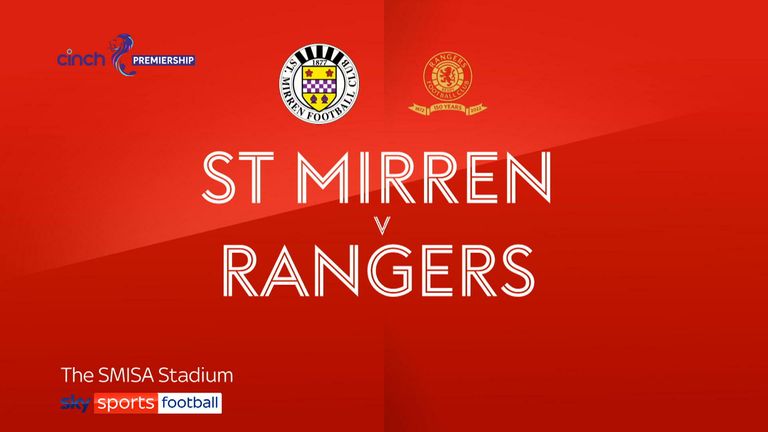 Highlights of the Scottish Premiership match between St. Mirren and Rangers

Alfredo Morelos scored his 100th Rangers goal to help his side come from behind to win 2-1 at St Mirren and return to the top of the Scottish Premiership.

St Mirren had gone ahead after just four minutes through Connor Ronan's spectacular long-range strike, only for the champions to turn the match on its head with two goals in the space of just a minute and 46 seconds.

⚽️💯 Alfredo Morelos has scored his 100th goal for @RangersFC (199th app) - the first player to reach a century of goals for the club since Kenny Miller in 2016 pic.twitter.com/r4DuPuQyQ1

The equaliser came after Alan Power caught Ianis Hagi just inside the area, with Kemar Roofe stepping up to convert the resulting penalty, before Morelos put the visitors ahead two minutes before half-time.

Captain James Tavernier broke clear down the right and from his inviting centre, the totally unmarked Colombia striker stooped to head home from six yards out to finally bring up his century of goals for the club in his 199th appearance.

As a result, Steven Gerrard's side moved back to the top of the table, three points above Hearts, while St Mirren stay seventh after the end of their six-match unbeaten run.

How Rangers moved top of the table

Rangers arrived at the SMiSA Stadium to face one of the in-form sides in the Scottish Premiership and the team that had knocked them out of the Scottish League Cup last season at the same venue, and the early exchanges showed why.

⚽️ 🚀 Connor Ronan’s goal in the first @saintmirrenfc have scored from outside the penalty area in @spfl this season, whilst it’s the first such goal Rangers have conceded in the Premiership since Feb 21 pic.twitter.com/U1s2jtxddA

Jim Goodwin's team controlled the opening quarter of the game, helped by going ahead early on in eye-catching style with one of the goals of the season as Ronan won the ball back off John Lundstram in midfield, before striding towards goal and beating Jon McLaughlin - in for Allan McGregor - with a thunderous shot into the top righthand corner.

That early strike appeared to stun Rangers, like an early knockdown in a boxing fight, and it was not until just before the break that they got back into the contest in dramatic style, albeit with a helping hand from their hosts.

Alan Power initially gave the ball away and when trying to make up for his mistake, only succeeded in bringing down Hagi just inside the box, allowing Roofe to bring his team level with a well-taken penalty.

Rangers boss Steven Gerrard made just the one change from the side that beat Brondby 2-0 in the Europa League on Thursday as Jon McLaughlin came in for veteran goalkeeper Allan McGregor.

Less than two minutes later and Rangers were ahead after a well-worked goal as Tavernier centered perfectly for Morelos, somehow left on his own in the six-yard box, to head home his third of the campaign and more importantly, to bring up his ton for the club.

That goal ended up being the winner as the visitors largely controlled the second period, keeping their opponents at arms' length to back top by extending their remarkable run to just one defeat in their last 49 league outings.

St Mirren boss Jim Goodwin: "Really disappointed not to have anything to show from what was a decent performance.

"We were comfortable and the disappointing thing for me was the manner of the goals we conceded.

"When you are playing against Rangers or Celtic, if they cut you open and play some fantastic free-flowing football you hold your hands up and say it was a good goal.

"But it was two really poor goals from our point of view. The penalty, when Alan (Power) watches it back he will agree he doesn't need to try to nick the ball, if he just jockeys (Ianis) Hagi he is probably not going to do a great deal with it.

"You stick a leg out and unfortunately players are going to go over and in the modern day it is penalty.

"The second goal is a real killer blow.

"Conor McCarthy gets himself into a good area at the near post and he needs to clear it - as simple as that. Morelos is never going to miss that two yards out." 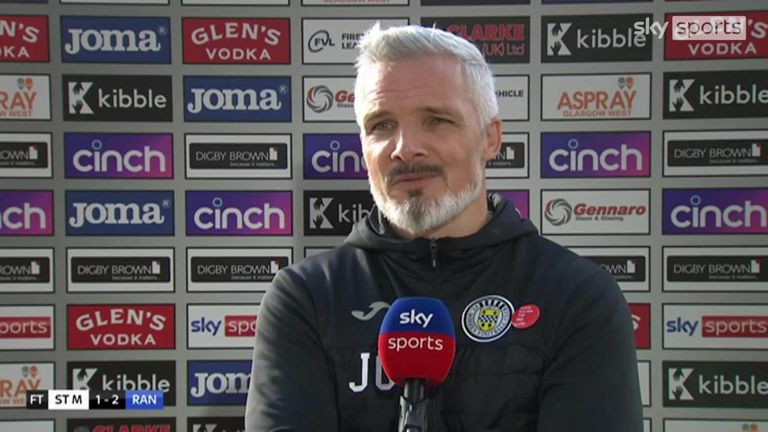 Jim Goodwin was extremely disappointed after loosing to Rangers.

Rangers boss Steven Gerrard: "That's what we want our number nines to do, run through the goal. We know we have the service from the sides.

"It was a fantastic cross from James but 100 goals at any level for any club is a magnificent achievement.

"I said last week he will smash 100 and hopefully go on and get many more for Rangers.

"Kemar Roofe, 50th appearance, 26 goals, we've got two poachers/goal-scorers in our armoury now which is fantastic for me.

"The conditions weren't really for us today but what we did was find a way to win. All in all a lot of positives but they all came after the first 25 minutes because St Mirren were better in the opening period." 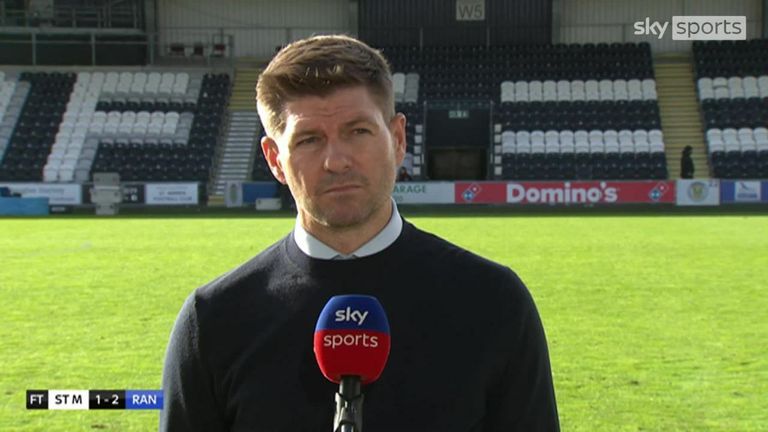 Rangers boss Steven Gerrard was pleased with the result after winning 2-1 at St. Mirren.

Man of the Match - Kemar Roofe

The striker led the line expertly once again after his impressive showing against Brondby in midweek, staking a claim to be Rangers' first-choice frontman in the process by netting his 26th goal for the club in just 50 appearances.

Yes it was only a penalty, but it was a well-taken spot kick nonetheless to get his team back in the contest, while the 28-year-old was a thorn in the side of the St Mirren defence all afternoon long.

And given his last two displays, and goals, expect Roofe to start up front at home to Aberdeen on Wednesday.

St Mirren travel to Motherwell, while Rangers take on Aberdeen at Ibrox, with both Scottish Premiership games kicking off at 7.45pm on Wednesday.