By Ben Grounds at Vicarage Road 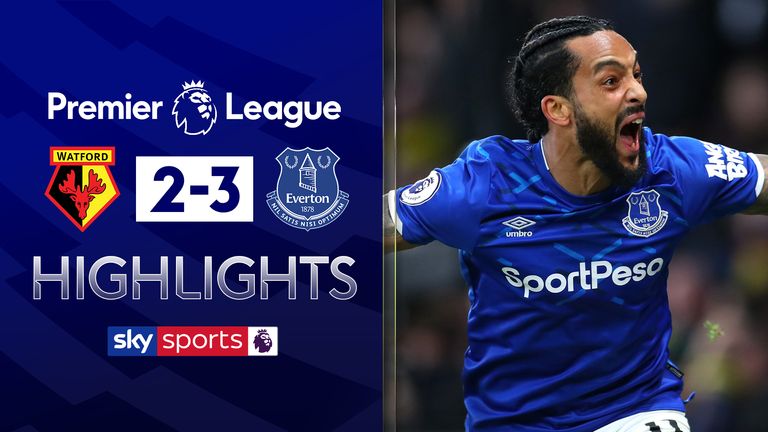 FREE TO WATCH: Ten-man Everton fight back to win at Watford

Everton completed a remarkable comeback as Theo Walcott's first Premier League goal of the season secured a dramatic 3-2 win from two goals down against Watford at Vicarage Road.

Adam Masina fired the hosts into a 10th-minute lead before Roberto Pereyra made it 2-0 three minutes before the break.

Everton deserved little from their first-half efforts, but found a route back into the match when Yerry Mina scrambled the ball home from close range (45), and the Colombian defender pulled the Toffees level when he headed in again in the fourth minute of first-half stoppage time.

The second period was a far more attritional affair, but Watford were handed a numerical advantage when Fabian Delph was sent off for a second bookable offence (71), 13 minutes after being cautioned for a foul on Pereyra.

Everton would have settled for a point at that stage, but they snatched all three in the final minute of normal time as Walcott pounced to slide home at the far post to spark wild scenes of celebration among the travelling supporters.

The result means Carlo Ancelotti's side move up to ninth in the table while Watford drop to 19th following Bournemouth's win over fellow strugglers Aston Villa.

Man of the match: Yerry Mina.

Walcott provides sting in the tail

"It's exceptionally disappointing," Watford boss Nigel Pearson said after seeing his side suffer defeat in the final minute for a second successive Premier League game. "To have played very positive for the first 44 minutes, it's extremely frustrating.

"We allowed them to get back into the game too easily and lost it at the end again. We had the chance to manage the ball better and we paid the price."

It was the first time since December 2017 that Everton won a Premier League game after conceding the first goal - a run of 35 matches. The away side had not won at Vicarage Road since a 3-0 victory in February 2007, and they made the worst possible start on Saturday as they fell behind inside 10 minutes in Hertfordshire.

Gerard Deulofeu has enjoyed a resurgence under Pearson and, against his former club, he took his tally to five goal involvements in his last seven Premier League appearances, brilliantly controlling Etienne Capoue's pass to set up Masina for his first Watford goal - a composed finish beyond Jordan Pickford.

The visitors were second best in all departments during the opening 45 minutes and deservedly fell further behind following more slack defending with three minutes of the opening period remaining. Delph's pass back to Mina was intercepted by Troy Deeney, who laid the ball on a plate for Pereyra to lift his shot over Pickford.

Christian Kabasele came in for Craig Dawson at the back for the hosts in the one change to the side that lost 2-1 at Aston Villa in their last Premier League match.

Everton made three changes to the side that drew 2-2 with Newcastle as Gylfi Sigurdsson, Richarlison and Alex Iwobi came in for Morgan Schneiderlin, Bernard and Moise Kean.

It has been an abject display from the Merseysiders, but they found a route back into the contest almost immediately as Lucas Digne's deep corner was met by Mina, who bundled in from close range at the second attempt.

Ancelotti's side had been on the receiving end of conceding two goals at the end of their last encounter, dropping two points against Newcastle, but they were the beneficiaries this time as Watford's lapse in concentration brought a leveller before the break.

This time, Mina didn't require a rebound as he rose unmarked to meet Gylfi Sigurdsson's deep corner to firmly plant his header beyond the rooted Ben Foster.

Watford were shell-shocked, and Pearson's half-time team talk would have been a lively affair, but it was Everton who once more emerged with greater urgency as Richarlison almost met Sigurdsson's inviting free-kick within five minutes of the restart.

Marco Silva's acrimonious departure from Watford back in January 2018 following Everton's advances has created plenty of needle between these two clubs, and despite the Portuguese's departure from Goodison in December, this was an ill-tempered affair that boiled over with 19 minutes remaining.

Delph had already been cautioned when he needlessly left his leg in to haul down Capoue out wide on the right, and following appeals for a second booking, referee Craig Pawson duly obliged in sending off the Everton midfielder.

The onus was now on Watford to seek a winner as Pearson turned to Isaac Success and new signing Ignacio Pussetto, but Everton clinically stole all three points in the final minute of the 90.

Masina dawdled in possession, allowing Richarlison to stride forward, and after his pass across goal wasn't connected with cleanly by substitute Moise Kean, Walcott was on hand at the far post to steer his shot beyond Foster to seal a sensational comeback.

Watford boss Nigel Pearson: "To come in at 2-2 was very frustrating. We allowed them to get back into the game too easily and lost it at the end again. We had the chance to manage the ball better and we paid the price. We've been good defending set plays generally speaking, but today we weren't.

"The second is a free header and the first one is a bit of a melee where we've not been able to deal with the first contact. We've paid the price for a lack of concentration. Everton boss Carlo Ancelotti: "It was an important result moreover because of what happened in the game. In the second half, we were better but with 10 men, it was more difficult and we had to defend and seek opportunities on the counter-attack. In that situation, all three players did really well.

"In the first half, we were 2-0 down and lost a lot of duels and second balls. In the second half, we were in control of the game and I felt we would've won if it was 11 against 11. We have to sometimes manage the decisions of the referees which I felt in this situation was wrong.

"It was a difficult game because Watford are a strong team, but this can help us have more confidence for the future." 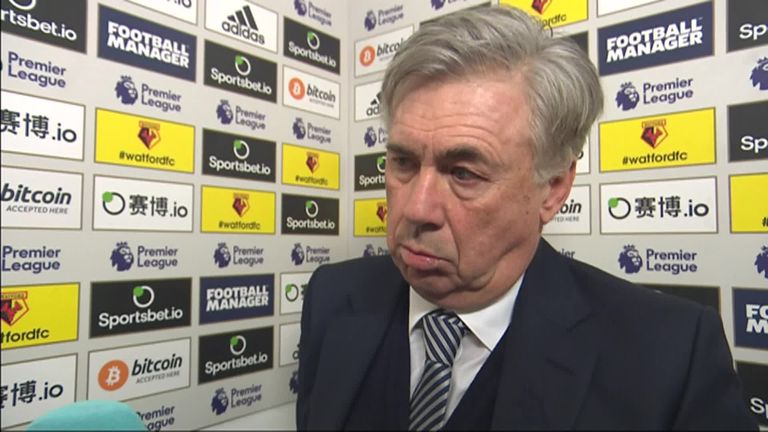 Carlo Ancelotti felt Fabian Delph was unfortunate to receive a red card, but was impressed with the way his team fought back

Man of the match - Yerry Mina

Mina's duel with Deeney was engrossing and he recovered from a shaky start to drag his side over the line.

You wonder if Everton would have had a performance such as this under Marco Silva, but Ancelotti has quickly identified his first-choice defensive pairing with the former Barcelona defender impressing alongside Mason Holgate.

Mina made four clearances, a game-high, as he engaged in a robust duel with Deeney and his two goals on the stroke of half-time turned the game on its head.

Deeney was unable to extend his run of scoring four goals in five games and Mina's work was key in both penalty boxes.

'Delph sending off was harsh'

"I don't know how Watford have lost, as with 42 minutes on the clock, they were cruising along. Everton were shocking defensively again but it just went flat for Watford. Mina was unmarked for the second goal which was a shambles.

"The second half was all Everton and I thought it was harsh that Delph was sent off. The Watford players were all over the referee Craig Pawson demanding action and it was really them who got him sent off.

"The referee gave in to that pressure. Everton deserved to win on the basis of the second half but I don't know how they were in it."

Watford now embark on their winter break, returning to Premier League action away to Brighton on February 8 at the Amex Stadium; Kick-off at 5.30pm. Everton host Crystal Palace next Saturday at 12.30pm before they have their two-week pause.