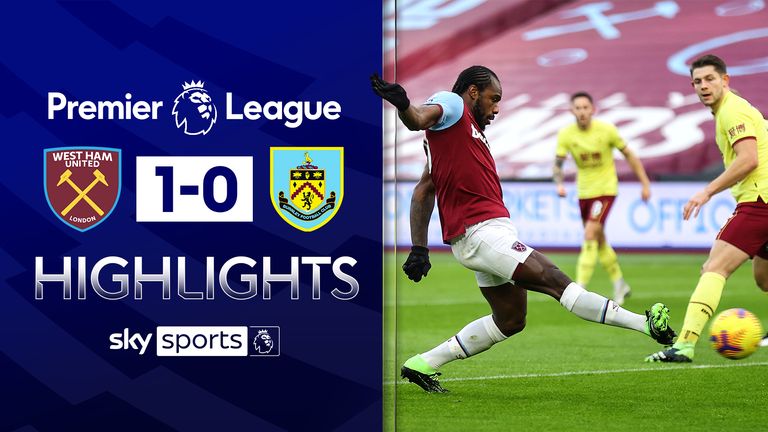 FREE TO WATCH: Highlights from West Ham's win against Burnley in the Premier League

Michail Antonio gave a reminder of his worth to West Ham by scoring the winning goal in a 1-0 victory over Burnley.

In his first start for eight Premier League games, the talismanic striker netted his ninth goal in his last 11 Premier League starts when taking advantage of some lacklustre Burnley defending (9).

West Ham are now unbeaten in their last seven games he has started, winning five of those, including this one over a toothless Burnley, who only really started to pressure the Hammers with their direct approach late on.

Dwight McNeil clipped the crossbar with a cross but that was really as close as Sean Dyche's men came in a result that keeps them in 17th place in the Premier League, four points above the drop.

Meanwhile, David Moyes' men have only lost four of their last 16 Premier League games and are just three points off a top-four spot in eighth.

Antonio came in for his first league start since October following a spell out injured as Moyes felt confident enough in his fitness to sell Sebastien Haller to Ajax.

He found the net in the ninth minute with West Ham's first attack of the match after Said Benrahma's ball had sent Jarrod Bowen through. He sent a ball back to Pablo Fornals, who delivered a cross into the area that really should have been dealt with by Ben Mee and James Tarkowski, but a mix-up between the pair allowed Antonio to tap home at the back post.

The 30-year-old celebrated by performing a socially-distanced backstroke by the corner flag following a challenge by team-mate Declan Rice.

It was the key moment of an otherwise drab first half. Burnley briefly thought they had equalised when a Chris Wood cross was diverted into his own net by Aaron Cresswell, but the Burnley forward was pulled up for offside.

Moments later, West Ham almost doubled their lead, with Rice flicking on Bowen's corner to Angelo Ogbonna, who headed against a post.

Moyes will have called for much more of the same after the break and West Ham started in a positive manner, sensing a second goal. Rice went close with an audacious angled free-kick which flew narrowly over and Bowen - otherwise excellent - took too long to play in Benrahma, who would have had an easy tap-in if he had been found.

Rice then fed Bowen, who raced clear of McNeil but buried his shot into the side-netting.

Burnley survived that pressure and began to force the Hammers deeper with time ticking away.

Mee headed Robbie Brady's ball wide, and they came even closer when McNeil's cross looped over Lukasz Fabianski and bounced back off the crossbar.

Many teams would have folded under the Burnley siege but, led by Ogbonna, West Ham comfortably saw out the victory, keeping a fourth consecutive clean sheet.

In a game significantly lacking in quality, Bowen was the shining light. As others around him gave the ball away and took the easy option, the winger was always thinking forward with his runs with the ball. Only Fornals made more than his 15 sprints with his ability to force the Burnley back four towards their own goal a key part of West Ham being able to control the majority of the game. Antonio pushed him close with a typical all-action display and of course grabbed the all-important winning goal. But there was an element of rustiness in his game still, which bodes well for the Hammers. There is plenty more to come from him.

West Ham boss David Moyes said: "Michy [Antonio] was very good for someone just coming back from injury. He's shown a great level of robustness in the last six months and hopefully we can get him back up to that. If he can regain the form of those previous months that would be a big thing. I didn't enjoy that we created chances but didn't take them, but it was a day where we needed our defence to stand up and be counted. Ogbonna and Dawson especially."

Burnley boss Sean Dyche: "We conceded a softer goal than usual for us but I'm not going to criticise my centre-halves, I thought they were excellent today.

"They didn't really have too many other chances, until near the end. It's just about finding the detail in the final third.

"It's rare in the Premier League to go away from home and have as much possession as we did.

"There were a lot of good things but we've come away with nothing. West Ham defended very well today so credit to them for seeing the game through for a clean sheet.

"After eight games we had two points. So we've been effective. But we need to get more effective."

West Ham are back in action on Tuesday at the London Stadium with West Brom the visitors. Liverpool are next up for Burnley in a tough-looking fixture at Anfield.