Report and highlights as debutant Grady Diangana impresses in rout 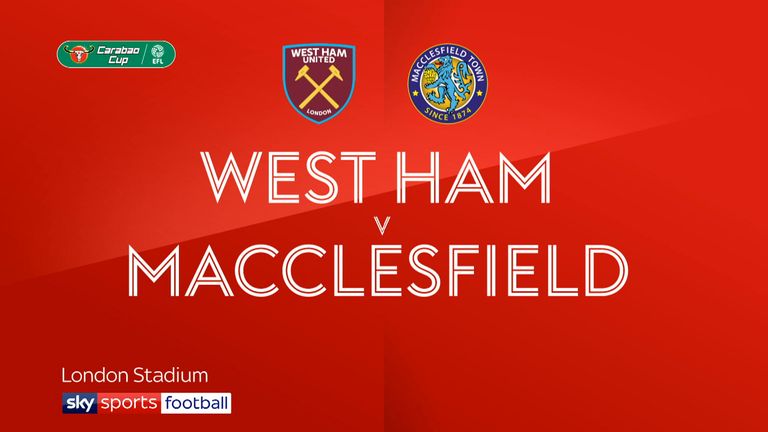 Highlights of the Carabao Cup clash between West Ham and Macclesfield.

West Ham ran riot against the Football League's bottom club as they beat Macclesfield 8-0 - their biggest win since 1983 - to progress to the Carabao Cup fourth round.

West Ham took a while to get going, but took the lead with their first meaningful attack of the match, with Michail Antonio heading home in the 29th minute, before Robert Snodgrass opened his account for West Ham three minutes later.

Seven minutes later it was three, with Lucas Perez also getting of the mark this term with a fine volley, before Ryan Fredericks scored his first goal in four and a half years six minutes after the interval.

Four more goals followed as Angelo Ogbonna (54) Snodgrass (60) and a double (67, 82) from impressive debutant Grady Diangana completed the rout to seal progression to the fourth round in the most emphatic manner.

Man of the match: Grady Diangana

Macclesfield actually had the first big chance of the game, with Harry Smith denied by a smart Adrian save, and that miss proved costly as the hosts took control and soon built a commanding lead.

Declan Rice, who came on as an early substitute in place of the injured Carlos Sanchez, will take a great deal of credit for the opener, with his cross inch-perfect for Antonio to break the deadlock from close range. 13 of Antonio's 22 goals in all competitions for West Ham have been scored with his head.

Soon enough it was two. Diangana did brilliantly to work space for the shot, his effort was saved but Snodgrass was on hand to score his first ever goal for West Ham.

Eight changes for West Ham from their weekend clash with Chelsea, with only Issa Diop, Michail Antonio and Pedro Obiang keeping their places in the side. Adrian was in goal, while academy graduate Grady Diangana makes his first-team debut for the hosts. Macclesfield were without suspended defender Michael Rose following his dismissal against Morecambe at the weekend.

From there on in it was just an issue of how many. Perez brilliantly volleyed home to make it three, before Fredericks opened his West Ham account by thundering a strike into the net after a fine run.

The 20-year-old, on his senior debut, slotted the ball home after being set up by fellow youngster Joe Powell, before the same pair combined to make it eight. It will be a long journey back for Macclesfield, who remain winless all season.

Man of the match - Grady Diangana

What a senior debut for the 20-year-old. His footwork was at times exceptional, as he stood head and shoulders above his opponents. Two goals and some direct attacking play just gave him the edge over Snodgrass. On this evidence, Manuel Pellegrini may have to unleash him on the Premier League.