Match report and highlights as Hee-Chan Hwang nets either side of half-time to help Wolves beat Newcastle 2-1 at Molineux; Jeff Hendrick levels for Newcastle in controversial fashion just before the break; the hosts jump up to tenth in the table, Newcastle slip to second bottom

FREE TO WATCH: Highlights from Wolves' win over Newcastle in the Premier League.

The South Korea forward opened the scoring after 20 minutes with a well-taken goal - Wolves' first in the league at Molineux this campaign - only for Newcastle to draw level in controversial circumstances through Jeff Hendrick's long-range effort four minutes before half-time.

However, Hwang - who his manager Bruno Lage feels "has adapted" well to English football - was there again with another fine finish just before the hour-mark to see his side over the line, while Newcastle boss Steve Bruce remains under pressure with the visitors still looking for a first win of the campaign.

As a result, Wolves jump up to tenth place, while Newcastle fall to second bottom.

Man of the match: Hee-Chan Hwang

How Wolves recorded first league win at home this season

There was pressure on both managers heading into this clash with Lage desperate to get a first home win in the league as Wolves boss, while Bruce was simply looking for a victory of any kind, so something surely had to give at a rain-swept Molineux.

It was the hosts, though, who took a 20th-minute lead after some fine build-up play from Raul Jimenez, expertly playing the role of creator on this occasion after his winner at Southampton last weekend.

The Mexico international glided past Sean Longstaff in midfield, before releasing Hwang down the right side of the box, with the frontman finishing expertly into the bottom corner as the Wanderers fans finally saw their team score at home this season.

However, despite Wolves seemingly controlling proceedings, Newcastle struck back just before the break, albeit in controversial fashion.

Wolves boss Bruno Lage made two changes to the side that won 1-0 at Southampton last time out, with both Ruben Neves and Francisco Trincao starting in place of the benched Leander Dendoncker and Daniel Podence.

Meanwhile, Newcastle manager Steve Bruce stuck with the same team that drew 1-1 at Watford last Saturday. Joe Willock, who had been nursing a toe problem, kept his place in central midfield alongside Sean Longstaff.

Allan Saint-Maximin was, of course, heavily involved as the France attacker went on one of his now characteristic dribbles, before feeding Joelinton down the left of the box.

As the Brazilian and Jose Sa challenged for the ball, it was the goalkeeper who came off worse with a damaged shoulder, allowing Newcastle to recycle the ball via Javi Manquillo to Hendrick on the edge of the box.

And the substitute - on for the injured Joe Willock - found the bottom left-hand corner with a well-struck drive past a helpless and wounded Sa.

The home team were furious with referee Graham Scott for allowing the goal to stand, with Lage booked for his protestations, but Video Assistant Referee Andre Marriner was happy with the decision, deciding it was a fair challenge on Sa.

In the end, though, that call did not affect the result as Wolves retook the lead on 58 minutes after yet more impressive approach work from their new playmaker, Jimenez.

The striker showed impressive skill and feet to bypass two Newcastle players just inside the opposition half, before striding forward to the edge of the box and cleverly slipping Hwang through on goal.

Faced with the advancing Karl Darlow and a covering Federico Fernandez, though, Hwang again found the bottom far corner with a composed finish to get his team off the mark at Molineux in the league this season.

However, Newcastle's wait for any sort of victory goes on.

● Newcastle have remained winless after their first seven games in four of their last seven Premier League campaigns (also 2014-15, 2015-16 and 2018-19). The Magpies had only failed to win any of their opening seven matches in two of their first 83 top-flight seasons.

● Wolves have won three of their last four Premier League games, as many as they had in their previous 16 in the competition (W3 D3 L10).

● Hwang Hee-Chan became the first Wolves player to score in both halves of a Premier League match since Diogo Jota against Leicester in January 2019.

● With both teams finding the net in all 13 meetings between the sides, Wolves vs Newcastle remains the most played Premier League fixture never to see a clean sheet in the competition.

● Jeff Hendrick scored five minutes and 38 seconds after coming off the bench, becoming the third ever Newcastle player to score in the first half as a substitute in a Premier League match, after Gary Speed (September 1998) and Nolberto Solano (November 1998).

50 - Raúl Jiménez has recorded 50 goal involvements in the Premier League (35 goals and 15 assists), the second Mexican to record as many combined goals and assists in the competition after Chicharito (63; 53 goals and 10 assists). Tri. pic.twitter.com/iNhPbNKUvd

Man of the Match - Hee-Chan Hwang

Wolves took Hwang on a season-long loan from RB Leipzig in August and boy must Bruno Lage be delighted with his new striker's contributions so far this season.

The South Korea international netted his team's second goal after coming off the bench in a recent 2-0 win at Watford and was on target twice to help Wolves beat Newcastle 2-1 on Saturday.

Both strikes were expertly taken by the 25-year-old, who in the process became the first Wolves player to score in both halves of a Premier League match since Diogo Jota against Leicester in January 2019.

And if he continues in this form, surely Wolves will look to turn Hwang's loan spell into a permanent move come the end of the season…

Wolves boss Bruno Lage: "He [Hwang] has adapted to the Premier League, he fits our way of playing because we need a player like him.

"I believe the players want to play with the ball. Top players can enjoy our game and he is a top player, like the other guys.

"I knew him before because when I was at Benfica I had some reports on him. But it's not just about Hwang, what I want is to take the best from all the players.

"It was a good feeling during the 90 minutes. We created a lot of chances. We found the right spaces to go and when you look back at the way we scored the two goals it's a good feeling from our side.

"We created the best chances to win the game." 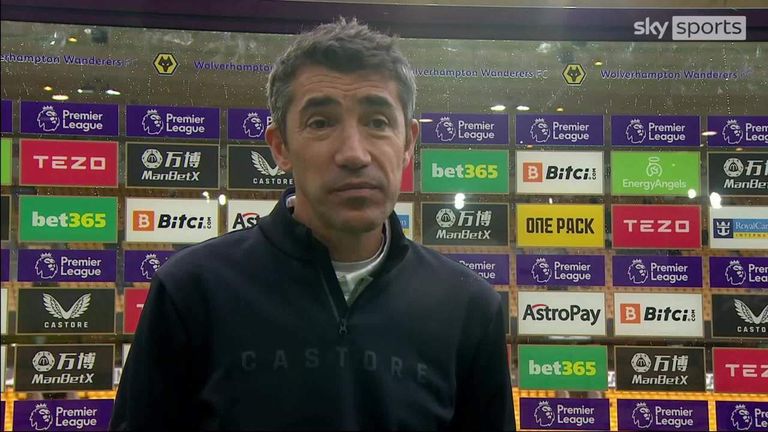 Wolves boss Bruno Lage was delighted with his side after watching them win 2-1 against Newcastle at Molineux.

Newcastle boss Steve Bruce: "There was nothing in it either way. I didn't think we deserved to get beaten.

"The first thing I always do is analyse myself, could I do anything differently? I always analyse that. We will have a look at the game, I didn't think we deserved to get beaten but I have said that too many times.

"It is another one which has crept away from us. We'll go to work again and hopefully we can get some of our injured players back.

"We are in the Premier League, we are one of four (sides) who haven't had the win. We are still searching for it.

"It's been so close but I keep saying the same thing, I didn't think we deserved to lose." 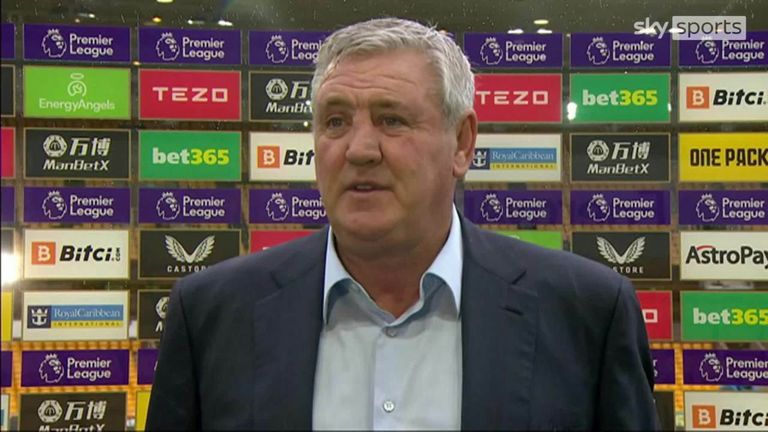 Newcastle boss said he was disappointed after watching his side lose 2-1 to Wolves at Molineux.

After the international break, Wolves take on Aston Villa at Villa Park on Saturday October 16, while Newcastle host Tottenham on October 17, with the game kicking off at 4.30pm live on Sky Sports Premier League