Report and free match highlights as Harry Kane back in action for the first time since the Euro 2020 final as a 72nd minute substitute; Dele Alli's penalty sees Tottenham win their second successive game; Wolves impress, but once again unable to find the net

Harry Kane returned to Tottenham action as Dele Alli's early penalty saw them edge past Wolves 1-0, with the hosts once again suffering from a lack of final product.

All eyes were on the teamsheet at 1pm, where Nuno Espirito Santo had named Kane on the bench for the first time since his delayed return to Spurs after Euro 2020.

The striker's future remains very much undecided with nine days left of the summer transfer window, but came on as a 72nd-minute substitute. The away fans sang 'Harry Kane, he's one of our own' as he replaced Heung-Min Son.

Alli's ninth-minute penalty proved to be the decisive goal, the midfielder firing his spot-kick into the bottom corner after he had been brought down by Wolves goalkeeper Jose Sa.

But Wolves dominated much of the game, spurred on by a boisterous Molineux crowd, and will feel aggrieved to have not been awarded their own penalty soon after as Olivier Skipp bundled Nelson Semedo to the floor.

However, as was the story under Nuno last season, Wolves suffered from a lack of final product with Raul Jimenez and Adama Traore both going close in a string of efforts as they lost a second successive game 1-0.

Tottenham maintain their perfect start to the new Premier League season, with Hugo Lloris marking his 300th Premier League appearance for Spurs with a clean sheet.

Kane returns as Wolves fail to find their edge

It was a tale of two penalties in the opening 15 minutes. Tottenham were awarded theirs in the eighth minute as Alli bundled over the oncoming Sa, who caught his trailing leg. There were questions as to whether it should be awarded, but VAR agreed with on-field referee Stuart Attwell's decision. Alli himself took the penalty, smashing it home into the bottom corner.

Five minutes later, and Wolves were denied their own penalty - despite it appearing to be a much more clear-cut decision. Skipp nudged Semedo over inside the area, and it was an emphatic no from Attwell, despite the fans and Wolves players alike calling for the spot kick. However, VAR again stuck with the on-field decision, and no penalty was awarded.

Man of the match: Adama Traore.

Just before the half an hour, Wolves should have equalised after dominating the play since kick-off. Traore burst past Japhet Tanganga down the left, pulling the ball back into the area. Francisco Trincao then backheeled it for the waiting Raul Jimenez, but he just lifted a sweet curler over the bar by mere inches.

Wolves continued to out-play Spurs, but the visitors did have a half chance not long before the break. Tottenham finally broke out of their own half, with Steven Bergwijn being played through. He then squared a superb ball for Alli, but the midfielder had just run too far ahead and could not connect. The offside flag then went up, although later replays showed it was a tight call.

Wolves had a few more half chances as the game ticked towards half-time, but a lack of final touch saw them undeservedly behind. It continued after the restart too, with Semedo curling an effort just wide of the target, before Francisco Trincao fired an effort harmlessly into Hugo Lloris' body.

Heung-Min Son had been anonymous in the first half, but was finally given a decent ball to run on to by Pierre-Emile Hojbjerg early in the second half. Son easily beat Coady for pace, but his attempted squared pass was seen behind well by Max Kilman. The Spurs forward gestured for handball, but there was little in it, having hit Kilman in the armpit.

Wolves' best chance of the game came just after the hour. Eric Dier was easily dispossessed by Ruben Neves, who played a sensational eye of the needle pass forward for Traore's run. The forward went low with his effort, but Lloris was off his line to make a two-footed save.

For all of their good play, Wolves could easily have conceded a second as Sa was forced into a superb double save. Bergwijn tested him first with an effort from range, before Son also fired goalwards with the rebound. However, Sa batted away both efforts well.

Soon after, Kane made his long-awaited entrance and could have scored the second for Tottenham too. Bergwijn did well to hold off three Wolves players before feeding Kane inside the area, but Sa made a smart save to deny him.

There were chances at either end as the game came to a close, but Wolves were unable to find their deserved goal as Nuno came away from his Molineux return with all three points.

Traore was looking at his best on Sunday. He terrorised Japhet Tanganga and Davinson Sanchez down that left flank, and was Wolves' brightest spark in attack.

He had four shots and made four key passes - both the second highest of the Wolves team, being involved in 22 duels and winning four fouls.

However, as with the entire squad, that final pass was just lacking as Wolves hunted for the equaliser. His pace and strength are always impressive, but turning this into goals is now vital.

Bruno Lage told Sky Sports after the game: "Adama works hard all week. He put in a good performance on the left and right, the way he attacks, in the transitions, in defensive so the way we work, I think can improve more and he is working hard on his shooting. The most important thing is the way we create chances, and the goals will come." 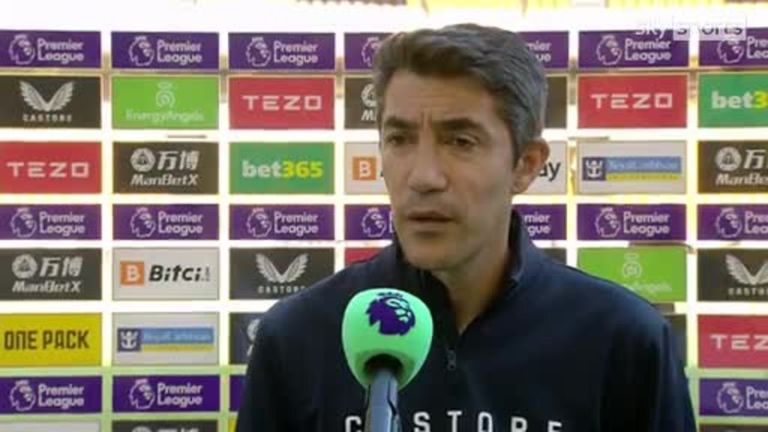 Bruno Lage says he is unhappy about the result, but confident about the work his team are doing following Wolves' narrow defeat to Tottenham

Wolves manager Bruno Lage: "The way we played the game, the chances we created, we had 25 chances to score one goal. We've created 42 in the last two games - I'm unhappy about the result but confident about the work we are doing and with the way we play, the future will be good.

"The first penalty is the right decision but after one or two minutes, the same foul in midfield was given. It was a question of experience, he goes against our goalkeeper and goes down. I think it was a penalty for us too, but I don't want to talk about referees.

"We have a lot of people to see the game, we have VAR to analyse these questions, so it was more important the way we played and the way we created a lot of chances, but unfortunately didn't score.

"I'm confident with our process. When I arrived, I challenged our players to play in this way, they accepted and are training hard to play like this. We've been training for four to five weeks altogether so that's the challenge - to change, to play how we are playing and create these chances we created in these games, against good teams in Leicester and Tottenham." 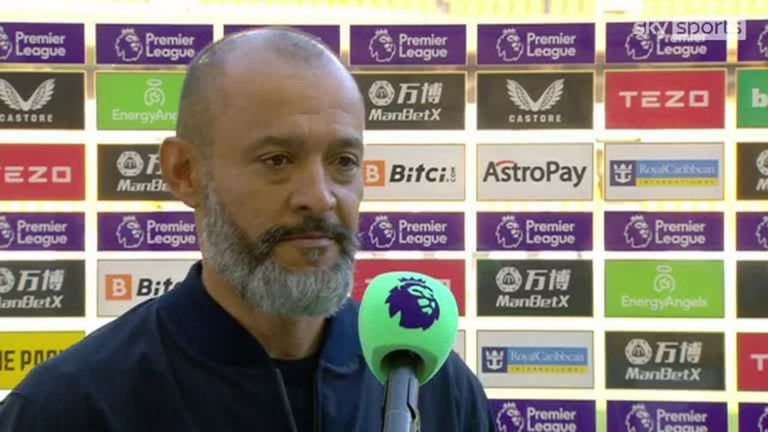 Tottenham manager Nuno Espirito Santo: "We were relentless, compact, solid, a unit, everybody helping each other. It was tough, from minute one until the last minute, but we defended very well. In terms of attitude, I'm very proud. When you are not able to do a lot of things, you throw yourself in front of the ball and do what you have to do and do what we came here for.

"We started well. We had a couple of movements, a couple of dangerous situations at the beginning and end of the game. In the middle, we should have more of the ball. The width was better in the second half with the wingers, we had much more. We had clear chances to kill the game, but credit to Wolves, they are a strong team.

"This is football. It's about trying to adapt, realising what the game asks for. It's clear as a team that you cannot lose the ball in the middle of the park, with the speed that they have, they can really harm you - and the time we did that with a bad action, it was a one-vs-one with Hugo. Sometimes it's about finding the good lines that prevent you having problems.

"We've had two tough matches against two tough opponents, very demanding opponents, so we are growing. We have a long way to go and there is a lot to improve and work on."

Both teams play in midweek - Wolves travel to Nottingham Forest in the Carabao Cup, while Tottenham play the second leg of their Europa Conference League play-off against Pacos de Ferreira on Thursday.

Wolves are back on Super Sunday next weekend when they welcome Manchester United to Molineux; kick-off 4.30pm. Tottenham also play on Sunday, travelling to Watford; kick-off 2pm.