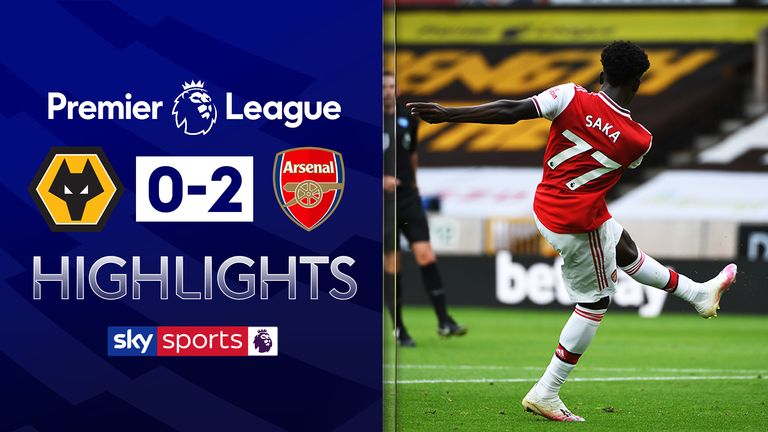 FREE TO WATCH: Highlights from Arsenal's win at Wolves in the Premier League

Arsenal brought Wolves' charge for the top four to a screeching halt with goals from Bukayo Saka and Alexandre Lacazette giving the Gunners a 2-0 win at Molineux.

Wolves had been unbeaten in eight Premier League games and had won all three of their matches since the restart, but a sensational volley from Saka (43) put Arsenal ahead at the end of the first half.

"It's been a week that I'll remember for my whole life," Saka told Sky Sports after the game, having signed a new long-term deal with Arsenal on Wednesday before being handed a start against Wolves, which he capped off with his first Premier League goal.

Wolves dominated the second period but a slotted finish from substitute Lacazette in the 86th minute sealed a second successive away victory for the Gunners, who have now won their last three games since a dismal 2-1 defeat to Brighton two weeks ago.

It moves Arsenal up one place into seventh, three points behind Wolves, who are now five points adrift of Chelsea in fourth after their 3-0 win against Watford. They also remain three behind fifth-place Manchester United.

How Arsenal continued their resurgence on the road

The game saw one of the best defences of recent times versus a poor away record, and it showed for much of the first half. Wolves saw the better early chances and could have gone ahead within seconds of the kick-off.

Raul Jimenez pinged the ball forward for the rapid run of Adama Traore, but Emiliano Martinez just did enough to scoop the ball away from the feet of the forward.

But Arsenal saw the better chances later in the half. Dani Ceballos delivered a corner which was directed into the path of Pierre-Emerick Aubameyang, but his skewed shot forced a low saw from Rui Patricio. Eddie Nketiah then smashed a first-time volley goalwards, but Patricio made another good saw at the near post, pushing the shot onto the post and wide.

But with two minutes of the half to play, Saka scored his first Premier League goal in superb fashion. A nice team move from Arsenal allowed Kieran Tierney pump a cross in from the left, which took a nick off of Matt Doherty and saw Tierney shout for a penalty, but Saka was waiting and hammered a volley into the back of the net.

Wolves were clearly given a stern talking to from Nuno Espirito Santo at half-time and were much improved after the break, going close again early on. Traore used his pace and physically to breeze past Sead Kolasinac down the right flank as Jimenez met his cross with a header. But the slightest of nudges from Cedric Soares put him off and the effort fizzed past the post, with the officials unmoved by any penalty calls.

In the 64th minute, Wolves should have equalised. Some good play between Jimenez and Diogo Jota saw the latter thread the ball into the path of Traore, who drove into the area. Martinez was out to meet him and with only the goalkeeper to beat, he tried to chip into the back of the net, but could only send his effort wide with Martinez doing his best to put the forward off.

Lacazette has seen his game time limited recently as Mikel Arteta experiments with younger forwards, but he showed why he remains an important asset with his late goal. He linked up with some of that younger talent as Joe Willock danced down the right flank, curling his cross around Romain Saiss. Lacazette then skipped over the outstretched foot of Conor Coady - which left the Wolves captain rooted to the spot - before finishing into the bottom corner for his first away goal in the Premier League since February 2019.

Arsenal could have compounded Wolves' misery even more not long after with Lacazette involved again. He passed to Aubameyang, who in turn found Willock on his right. With Patricio out to meet him, the 20-year-old struck but Ruben Neves was there to send the ball looping off the line.

Man of the match - Bukayo Saka

How can you deny the 18-year-old the credit after another eye-catching performance? It has been a big week for him after signing a new deal and earning another Premier League start, with both examples of trust and confidence in his talent repaid in spades.

While the build-up was a bit scrappy, Saka's finish was marvellous and instinctive, hitting home with a thunderous volley with his first touch that gave Patricio no chance of saving. It was his first Premier League goal and a few days he should be very proud of. 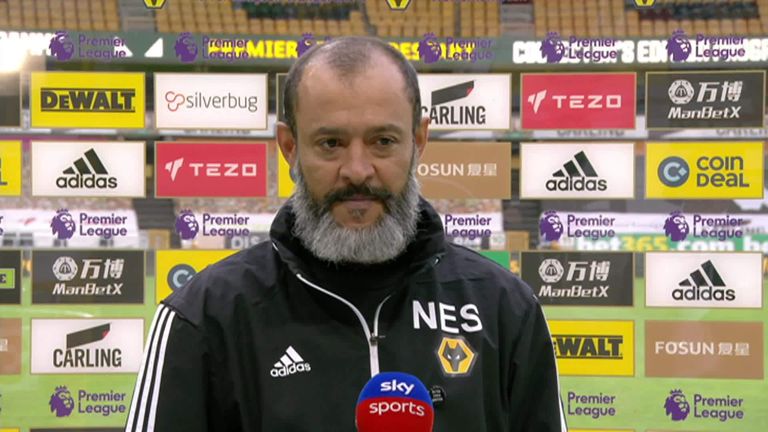 Wolves manager Nuno Espirito Santo: "It was a balanced first half. I think both teams were organised, good possession, not too many chances with the expectation of one moment where we lose a little bit of our organisation and focus and Arsenal scored.

"In the second half, I think we started better. We started pressing and really put Arsenal deep on the pitch, creating chances or a moment we could go for the draw, but we knew as the game goes by, it becomes dangerous in the counter-attack and Arsenal have good players. It was not the best of games but the work was there so let's go for the next one.

"It doesn't change the way we see things. Other results and the table is not what guides us, what guides us is how we did things today and we wanted to do things that we would not be able to do. Credit to Arsenal but we much improve our circulation much faster and don't focus on anything else, only focus about how we want to do things and prepare for the next challenge." 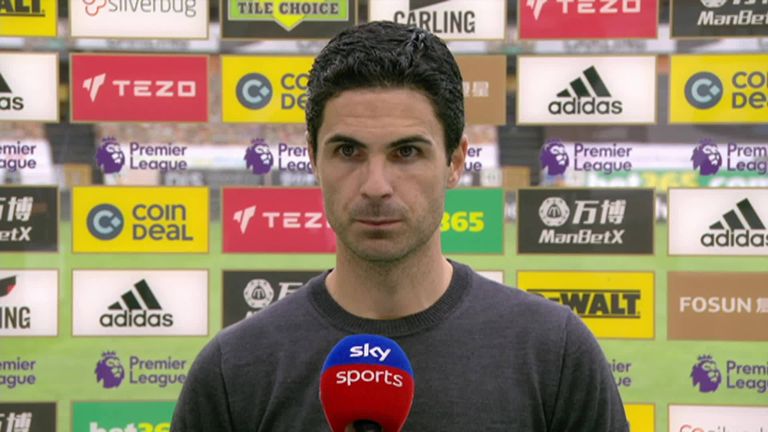 Arsenal manager Mikel Arteta: "I am delighted with the performance, with the shift the players put in, with the energy that we played, the fight for every single ball from the first minute to the last minute from every player that touched that grass so that's why we're demanding.

"There were a few moments that were good in play, the goals that we scored were really good as well. We have moments that we have to improve, how we manage the games and how we dictate the games better, mostly in the second half but we will get there.

"At least the spirit and how everybody approaches the game, they go full gas with every ball. 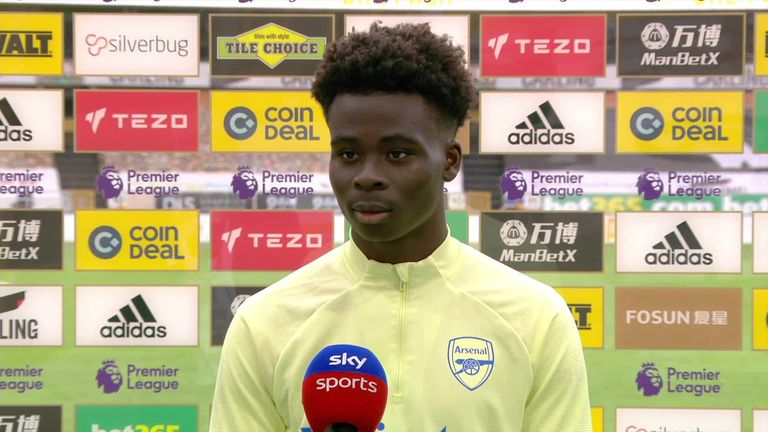 "It [the result] gives us a lift, it gives us momentum and it's four wins in a row, which is not easy to do with all the situations and circumstances we have had. We will try to recover to go again against Leicester and try to win a game, that's all we can do.

"This team is alive and it's going to be alive when they enjoy to suffer together and if they are able to do that, good things will come up."

Wolves are next in action on Wednesday when they travel to Sheffield United, live on Sky Sports (kick-off 6pm).

Arsenal will also be back on Sky Sports on Tuesday when they welcome Leicester to the Emirates (kick-off 8.15pm).