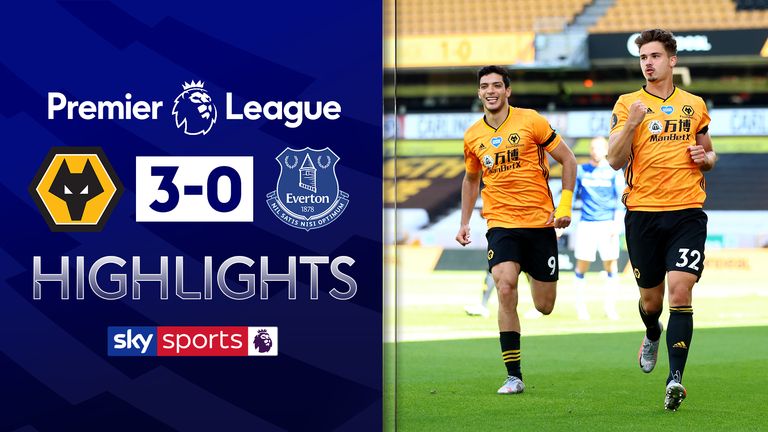 Wolves brushed aside Everton 3-0 at Molineux on Sunday with new boy Daniel Podence shining on his first Premier League start for Nuno Espirito Santo's side.

​​​​​​The Portuguese, who joined the club from Olympiakos in January, was brought down for a penalty which Raul Jimenez converted for his 25th goal in all competitions this season just before the break.

From then on it was all Wolves as first Leander Dendoncker glanced home a second a minute into the second period, before substitute Diogo Jota wrapped up the scoring after being set up by a wonder pass from Ruben Neves.

Wolves remain in contention for a place in next season's Europa League after moving up to sixth, three points behind Manchester United - who play on Monday night - while the visitors stay 11th.

Afterwards, Everton boss Carlo Ancelotti told Sky Sports: "It was a really frustrating day and performance. The spirit of the team was unacceptable."

How Wolves maintained their push for Europe

Everton manager Carlo Ancelotti opted for a change in formation, utilising three at the back with Lucas Digne and the returning Theo Walcott as full backs.

But it made little effect in a first half dominated by the hosts.

After two straight Premier League defeats, Wolves head coach Nuno decided to freshen his line-up up by introducing Podence for his first league start, and the Portuguese repaid his compatriot's faith with an all-action display.

The forward was involved in the first half's pivotal moment when his quick feet on the right edge of the box lured Digne into a rash tackle from behind.

Wolves made three changes from their loss to Sheffield United with Adama Traore only fit enough for the bench, while there was a first league start for Daniel Podence and Joao Moutinho also dropped to the bench with Leander Dendoncker starting in midfield.

Everton also made three changes from the 1-1 draw against Southampton with Leighton Baines drafted in for just his fourth start of the season, while Theo Walcott made is first appearance since the restart and Gylfi Sigurdsson replaced the injured Andre Gomes.

The reliable Jimenez kept his cool to dink home his sixth successful penalty in first-half stoppage time to maintain his 100 per cent record from the spot as Wolves deservedly lead at the break. Even though Ancelotti made changes for the second half, they had little impact on the flow of play.

One of the players introduced at the interval, young Jarrad Branthwaite, immediately gave away a free-kick near the right touchline, from which Dendoncker cleverly glanced home into the far corner after Pedro Neto's inviting delivery towards the penalty spot.

Those twin strikes either side of half-time knocked the wind out of Everton and thereafter it was just a question of how many more Wolves would score and it should have been more than just Jota's 74th-minute effort, drilled home after a sensational 60-yard pass from the impressive Neves.

⭐ Raul Jimenez is the first @Wolves player to score 2️⃣5️⃣ goals in a single season since Sylvan Ebanks-Blake in 2008-09 (when the club was in the Championship) pic.twitter.com/4ArwZ7wrqy 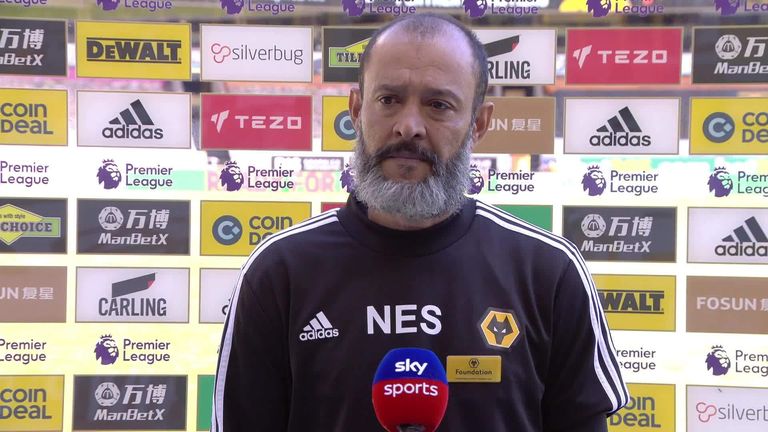 Nuno: "You are in pain (after a defeat) but you stand up the next morning and you have to go again. That is the game. We had a lot of actions today and didn't concede too many chances, it's always about trying to upgrade and raise the standards.

"It was not our main objective (keeping in touch with the top four), there were things we should improve. It's not about that, it's about trying to create and raise standards so we become a better team. Our finishes were not so good, look at the chances we had. Adama is not going to have an easier one." 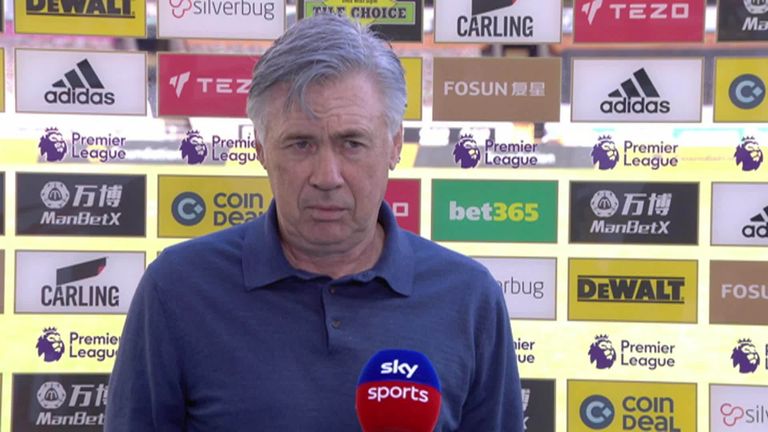 Carlo Ancelotti agrees with his captain Seamus Coleman that the attitude of the team wasn't acceptable in their 3-0 defeat against Wolves.

Ancelotti: "It was a really frustrating day and performance. The spirit of the team was unacceptable. There are some excuses but I don't want to have excuses, the performance was not acceptable. I spoke to the players and we have to prepare and work differently and have a different attitude.

"I don't want to talk individually about every single player. I said to them this attitude is not acceptable for me and we have to change immediately. I want to see a different spirit.

"If I have to be honest, in some games the spirit was really good. Liverpool, Norwich, Leicester. It's difficult to accept for this reason because this team has a fighting spirit."

Man of the Match - Daniel Podence

All eyes were naturally on Podence after Nuno gave the forward his first-ever start in the Premier League on Sunday lunch time and boy did the new man impress at Molineux.

The 24-year-old had his team's first shot of the game, a low effort that Jordan Pickford did well to keep out, before some neat control saw him brought down for the penalty from which the hosts open the scoring in first-half stoppage time.

"I've been so impressed with Podence, he is so exciting and the best player on the pitch, making things happen and always looking to get on the ball," was Jamie Redknapp's verdict on the Portuguese at the break.

And the player continued to impress in the second half to suggest there will be plenty more appearances to come in a Wolves shirt, with one particular bit of mesmerising skill on the right byline almost resulting in a first goal after a horrible Pickford fumble.

Meanwhile, Everton entertain struggling Aston Villa on Thursday, live on Sky Sports (6pm), before facing a tough-looking trip to take on Sheffield United at Bramall Lane on Monday July 20 (kick-off 6pm) and then they bring their campaign to a finish with a home clash against relegation-threatened Bournemouth on Sunday July 26.