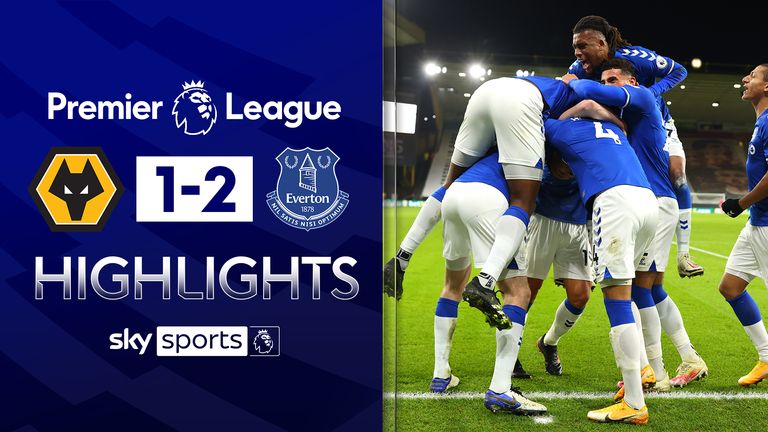 FREE TO WATCH: Highlights from Everton's win over Wolves in the Premier League

Everton moved into the top four after Michael Keane's powerful header snatched maximum points in a 2-1 victory over Wolves.

Despite having Dominic Calvert-Lewin unavailable and Richarlison only fit enough for the bench, Everton roared into an early lead through Alex Iwobi (5).

However, Ruben Neves was on hand to finish off a brilliant Rayan Ait-Nouri assist (14) but the game failed to live up to its early billing.

Both teams struggled for attacking cohesion but the first shot on target of the second half resulted in the winning goal when Keane rose bravely at the back post to head home Andre Gomes' cross (76).

Wolves have now won just once in eight league games since Raul Jimenez fractured his skull at the end of November and they dropped to 14th.

Man of the match: Michael Keane

How Everton rose to the challenge…

Everton had to adapt to being without 14-goal Calvert-Lewin with the striker out with a hamstring injury, but Iwobi made that problem disappear inside five minutes.

James Rodriguez's measured pass found Lucas Digne in space on the left and his cross found the unmarked Iwobi to produce a first-time finish into the bottom corner.

The lead only lasted less than 10 minutes, though, as Pedro Neto started to get Wolves up the pitch. Everton conceded a soft corner and Ait-Nouri showed great speed to get into space down the left. His cross was perfect and was calmly volleyed home by Neves.

The game failed to build on the early drama with Leander Dendoncker failing to test Jordan Pickford from inside the area.

Dendoncker headed over Joao Moutinho's free-kick after the break as Wolves remained in control of the game but rarely looked capable of breaking though a resolute Everton back four.

Neves was close to a spectacular second when his 30-yard volley dipped just wide with 20 minutes left but the hosts never prised Everton open.

Richarlison was introduced to give the visitors some impetus but it was Keane who grabbed the winner with 13 minutes remaining.

Andre Gomes worked space on the left and his teasing cross was powered in at the far post by the England defender.

Neves' free-kick then clipped the bar with five minutes to go but Wolves rarely looked to carry the weight to seriously test the expertly marshalled Toffees defence.

Man of the match: Michael Keane

Everton defender Michael Keane scored his third Premier League goal of the season as his side won 2-1 at Wolves, their third away win in a row in the Premier League.

The Everton defender is approaching the peak of his career and he's playing like a man on top of his game. Having turned 28 on Monday, Keane now looks the finished article. All the talk pre-match was how much the Toffees would miss the influence of Calvert-Lewin but this performance suggested that Keane is Everton's most important player right now.

Since switching to a back four in the draw in Burnley, Everton have conceded just three goals in six games. And the only defeat in that run came at home to West Ham when Keane was missing. His influence was clear to see at Molineux. No player made more clearances than him (8) and of course he popped up with the winning goal, his third goal of the campaign. With Keane at the heart, Everton do not roll over easily anymore.

Nuno Espirito Santo said: "I'm very worried (about the form). It is something we know we need to improve but at the same time be aware of what is happening and what we have to do for the future.

"We played a good game, there were not too many chances for both teams in the second half. It was a game decided on set pieces, we are frustrated and on small details games are getting away from us.

"Everton defended well, were tight and organised and made our job difficult but in the second half we should have done better. We need all the players in the squad healthy so we can improve.

"We have a strong team spirit which, in moments which are not so good, require more unity. Soon we will be better."

Carlo Ancelotti said: "The players adapted really well. The position of James Rodriguez and Gylfi Sigurdsson created problems for them. We adapted well to the characteristics of our players and at the back we were focused. All the back four were fantastic.

"We had a different approach without Richarlison and Calvert-Lewin. We played more to attack the flanks with Iwobi and (Lucas) Digne and it worked well because the first goal was a fantastic combination.

"Without Richarlison and Calvert-Lewin it is more difficult to score but I think to be focussed defensively enabled us to have a good game." 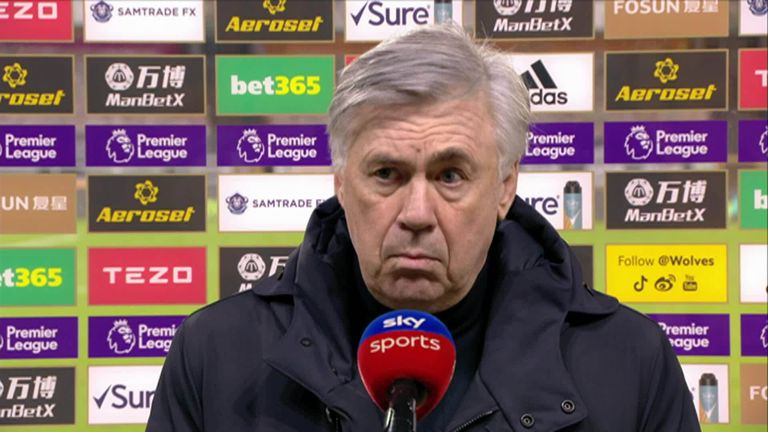 Carlo Ancelotti says his Everton side adapted well in their win against Wolves, especially as they were missing their main goal threats Dominic Calvert-Lewin and Richarlison.

Wolves face West Brom on Saturday while Everton should be back in action on Sunday but their game with Aston Villa could be postponed due to the Covid-19 outbreak in the Villa squad.