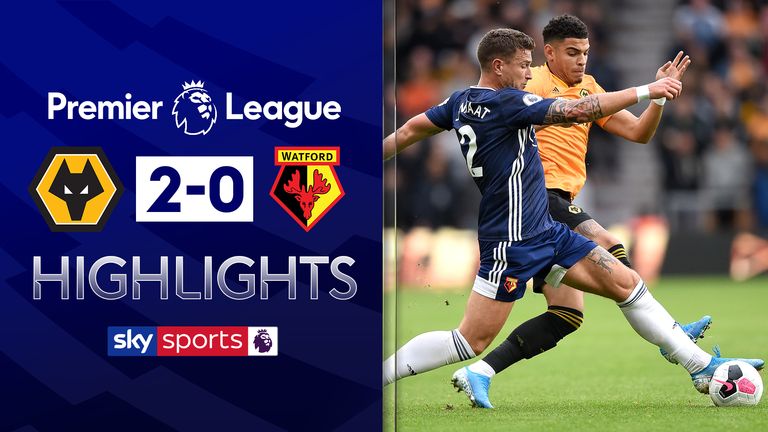 FREE TO WATCH: Highlights from Wolves' win over Watford in the Premier League

Wolves climbed out of the relegation zone with a 2-0 victory against Watford at Molineux, deepening Quique Sanchez Flores' side's troubles at the bottom of the Premier League table in the process.

Nuno Espirito Santo's side started the day just two points ahead of Watford at the bottom of the league, but they took the lead for the first time in the Premier League this season when Matt Doherty converted Pedro Neto's cross from close range.

After the break, Watford did show some signs of life but their chances of a result were ended when Morgan Gibbs-White's header hit Daryl Janmaat and rebounded past a wrong-footed Ben Foster to seal victory.

It was a much-needed win for Wolves, who move up to 13th following their first victory of the season. They are now five points ahead of Watford, who remain without a win this season. They also remain bottom, three points behind Newcastle, who face Leicester live on Sky Sports on Sunday, and Aston Villa.

Man of the match: Adama Traore.

Wolves started brightly and they created the first opening just five minutes into the game as Willy Boly's through ball released Raul Jimenez. However, the Mexican drilled the ball into the side-netting from a tight angle.

The hosts were eventually rewarded for their dominance in the 18th minute when Neto's low cross picked out Doherty, and the full-back made no mistake from close range to give his side a deserved lead.

10 - Since the start of last season, Matt Doherty (five goals, five assists) is one of only four defenders to have been directly involved in 10+ goals in the @premierleague, after Trent Alexander-Arnold (16), Andrew Robertson (13) and Lucas Digne (10). Raumdeuter. pic.twitter.com/He3hI5QLdJ

It was the first time this season that Wolves had scored first in the Premier League, but it was another early setback for Watford, who struggled to create anything of note in the final third during the opening 45 minutes.

Wolves thought they should have had a chance to double that advantage when Adama Traore's cross struck Jose Holebas on the hand, but referee Paul Tierney waved away the appeals before VAR Kevin Friend stuck with the on-field decision.

Wolves made one change from the side that drew 1-1 at Crystal Palace last time out in the Premier League. Jota was replaced in the starting line-up by Neto.

Watford made four changes from the side that lost 8-0 to Manchester City in the Premier League. Janmaat, Cathcart, Sarr and Welbeck came into the team in place of Mariappa, Femenia, Hughes and Foulquier.

Watford threatened early in the second half when half-time substitute Roberto Pereyra, who replaced Gerard Deulofeu, crossed the ball for Holebas. The defender's header was saved but then spilled by Rui Patricio, who was a relieved man when Tom Cleverley's effort dribbled inches wide of the post.

Watford were growing into the game, but they could not make their dominant spell of possession count. And they were eventually punished in the 61st minute when Doherty's cross was flicked on by Gibbs-White and went in off the unlucky Janmaat.

Flores' side had experience of coming from two goals down against Arsenal to earn a draw earlier this month, but there was to be no repeat on this occasion as Patricio produced a fine save to deny Danny Welbeck.

Abdoulaye Doucoure worked Patricio again with time running out, this time from long range, but the Portuguese goalkeeper held on as Wolves saw out the match for a first victory.

Wolves boss Nuno Espirito Santo: "We win, we draw, we lose. We are ready to compete. Today we won the game, and I thought we were the better team. Our fans saw a good game and we now have to raise our standards and improve. We had to improve. We haven't had good performances. We needed to raise the standards. We improved last season, last week and we improved today. We have to improve during the competition. 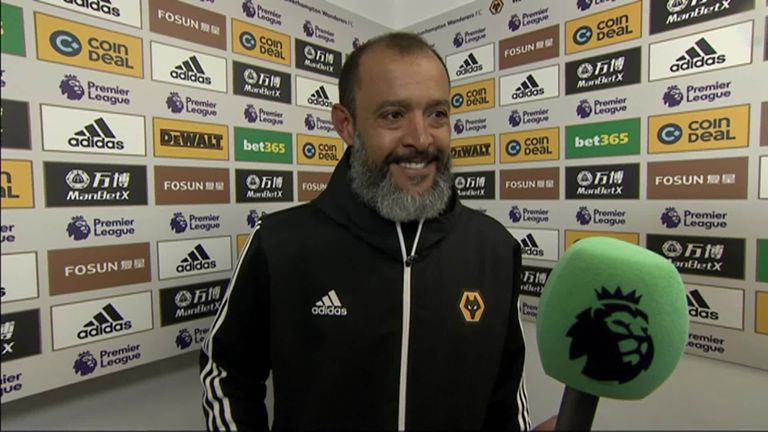 Nuno Espirito Santo says his side are on a long journey this season after claiming their first Premier League win of the campaign.

"What is very hard is to play games and improve - compete, compete, compete - and the boys did very well today. It was a good performance. We were very organised and defensively we were very good. We were aggressive, we recovered the ball and our shape was good. The clean sheet is the final result of something. Sometimes you are not well organised and you get a clean sheet but today I think we were." 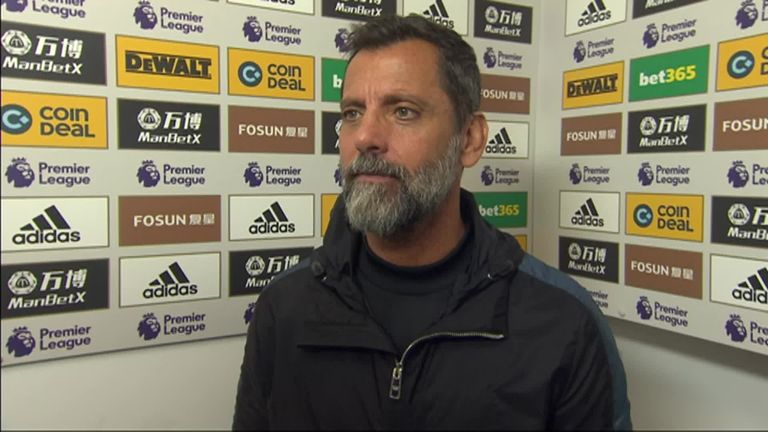 Watford's Quique Sanchez Flores says they need to change their mentality to a winning one after they lost at Wolves.

"Once we conceded the first goal it was difficult because of the morale of the players. We need to be stronger in defence and more compact and hopefully we will work and be better in the future. In the last three matches leading the team I am conscious of the situation. To find our style is one of the most important things."

There were a number of candidates for Wolves. Neto impressed on his first Premier League start, while Doherty, who got himself on the scoresheet, put in a tireless shift on the right.

But Traore gets the nod. He was a constant threat to the Watford defence with his pace - and his final ball, something he has been criticised for in the past, was excellent.

Nuno will be hoping the former Barcelona winger can keep this form going as Wolves look to continue their climb up the table.