Tom Heaton concedes penalty after 41 seconds, before Douglas Luiz error sets Bournemouth up for first win of the season 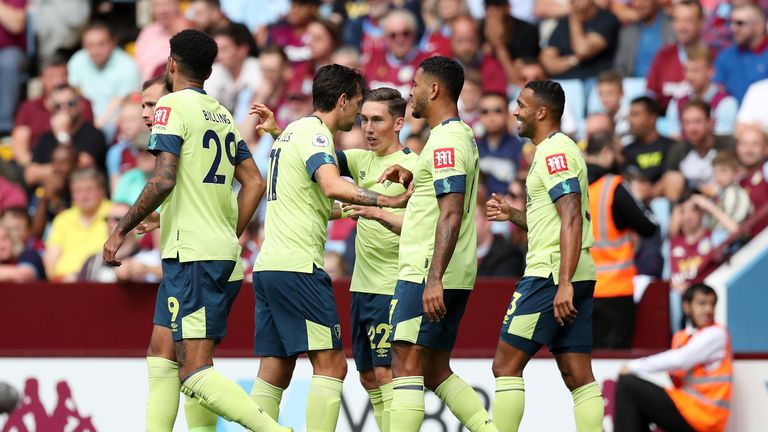 Aston Villa were condemned to a second straight defeat on their return to the Premier League as Bournemouth won 2-1 at Villa Park on Saturday afternoon.

Villa endured a nightmare start to their first top-flight home game since May 2016 as Tom Heaton tripped Callum Wilson after just 41 seconds with Josh King slotting home the resulting penalty.

Harry Wilson doubled the lead in the 12th minute after an error from Douglas Luiz and while the Villa midfielder atoned for that mistake with a sensational curling goal in the 71st minute, it was not enough as Bournemouth held on for their first win of the season.

The result leaves Villa without a point from their first two games after promotion, following last weekend's 3-1 defeat away at Tottenham.

Villa Park was hosting its first Premier League home game in more than three years, but the party atmosphere among the 41,000 supporters was swiftly dampened as mistakes from two of their summer signings gifted an early two-goal lead to Bournemouth.

Summer signing Douglas Luiz made his full debut for Aston Villa, as he replaced Conor Hourihane in midfield.
Harry Wilson - on loan from Liverpool - made his first Premier League start for Bournemouth, while Charlie Daniels also came into the starting XI.

Callum Wilson darted towards the byline in the first minute and Heaton needlessly tripped him inside the penalty area, allowing King to send the Villa goalkeeper the wrong way from the spot.

It got better for the away side in the 12th minute when Harry Wilson deflected a 30-yard shot off Tyrone Mings past Heaton after Douglas Luiz foolishly opted to dummy a simple pass from Trezeguet.

Bournemouth goalkeeper Aaron Ramsdale repelled Villa throughout the first half, producing a fine save from John McGinn in the 22nd minute, Wesley five minutes later and with the help of Nathan Ake, somehow denying a close-range shot from Trezeguet on the stroke of half-time.

The home fans were left further frustrated as Bournemouth midfielder Philip Billing somehow avoided a second yellow card after reckless challenges on both Jack Grealish and McGinn before he was wisely substituted by Eddie Howe during the half-time interval.

Villa captain Grealish had lost his previous 19 Premier League matches and went close twice in the second half, curling narrowly wide just after the break and heading Ahmed Elmohamady's cross over the bar on 62 minutes.

But Villa's pressure was rewarded in the 71st minute when Grealish teed up Douglas Luiz to shoot from distance and the former Manchester City player lashed an unstoppable curling strike into Ramsdale's top corner.

Bournemouth might have been awarded a penalty minutes later when King went down under Trezeguet's challenge, but frustrated their opponents in the closing stages to see out a fine away win and give Villa a reality check after their summer of heavy spending.

Dean Smith: "We were a penalty down within a minute and Tom is one of our most experienced players. It's one I'm sure he won't do again and it gave them a tail-up.

"I thought it would be a good game of football, I like how Eddie's teams play. They have a front four that will score goals. We knew we had to be good defensively and we made two mistakes and were punished for them. Harry Wilson got a bit fortunate with a deflection; he took a pot shot from 30 yards and it deflected in.

"The big call, for me, was Phil Billing should have been sent off. He was yellow carded very early and made three fouls after that."

Eddie Howe: "It was a really hard game. Villa are a good team. We started well and got the lead, but Villa came back and we knew the second half would be difficult. We defended very well and defended the set-plays and crosses well.

"I thought Villa made it a really good game today. They played well and have good players. That's why I think it's a big win to come here and perform the way we did."

This was a fine collective performance from Bournemouth and it is tough to single out one individual. Aaron Ramsdale made at least three top-class saves behind a defence that was superbly marshalled by Steve Cook, who threw himself repeatedly in the way of Villa efforts. The front two of Callum Wilson and Josh King were a constant threat throughout the 90 minutes, but the man-of-the-match award goes to Harry Wilson on his first Bournemouth start.

The winger, making his first start for his new club following his loan move from Liverpool, was tireless in his running down the right until he was taken off in the second half. Ultimately, his willingness to shoot from distance was the decisive factor in this game. Since the start of last season, he has scored 10 goals from outside the box in all competitions, more than any other player in English football. Premier League defences have been put on notice.

Both sides are live on Sky Sports next weekend as Aston Villa host Everton on Friday Night Football (8pm kick-off) and Bournemouth are at home to Manchester City on Super Sunday (2pm kick-off).