Report and highlights from the Sky Bet Championship clash between Birmingham and Peterborough at St Andrew's as late goals from Gary Gardner and Scott Hogan earned a dramatic point for the Blues on Tuesday night. 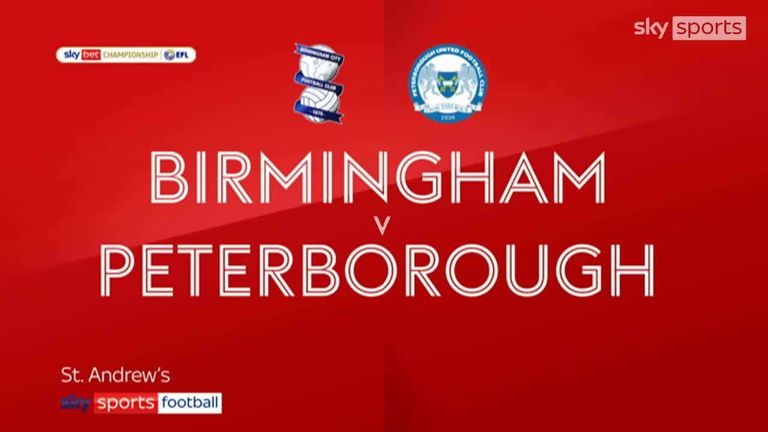 Highlights of the Sky Bet Championship match between Birmingham and Peterborough.

Peterborough were unable to change their away fortunes as two late goals for Birmingham forced a 2-2 draw at St Andrew's.

A first-half goal from Jack Marriott and Jonson Clarke-Harris' strike in the 67th minute gave the visitors a commanding lead, but Gary Gardner and Scott Hogan struck late on to spark a thrilling end to the encounter.

Ryan Woods delivered an enticing free-kick early on as Marc Roberts glanced narrowly wide from 10 yards out. Ivan Sunjic was then caught in possession in the attacking third, causing a four-on-two counter-attack.

In the 16th minute, Marriott was fed through and finished calmly to put Posh ahead.

Woods capitalised on a poor touch from Clarke-Harris and Jordan James picked up possession only to be scythed down by Posh captain Oliver Norburn, but the following free-kick opportunity led to nothing.

Hogan cut inside from the right brilliantly, pulling a cross back for Blues captain Lukas Jutkiewicz, who dragged his shot wide under pressure.

Harrison Burrows' low driven cross was flicked on at the front post by Jack Taylor, forcing Neil Etheridge to make a smart stop.

Frankie Kent was booked late on for attempting to prevent a Blues counter, following an advantage given to the home side.

Roberts soon ventured forward, sending his header sailing high over the crossbar, causing no worry to Steven Benda in the opposition net.

Callum Morton, not long after being introduced for Marriott, found himself in on goal after a slide-rule pass from Kwame Poku, but his effort was smothered by Etheridge.

Jeremie Bela's dangerous cross found its way to the far post, where Gardner's stab at goal was stopped at the feet of Benda.

Roberts nudged Morton to the floor and Oliver Langford gave a controversial penalty to Posh, much to the disgust of the Blues faithful. Clarke-Harris confidently slotted into the bottom left corner, giving the visitors a two-goal advantage.

James was replaced by Jordan Graham after 76 minutes to add some desired attacking threat.

Blues, on the hunt for a result, saw Gardner's strike from 18 yards out roll through the Posh defence and find the bottom left corner.

Bela delivered another brilliant cross moments later, met at the front post by Hogan, who diverted his header past Benda in the 88th minute to level the contest in dramatic fashion.

Birmingham's Lee Bowyer: "We just couldn't get going after that [Marriott's opener]. First balls, second balls, simple passes and controlling it, we didn't look too good. If there's one positive I can take from it, they kept going till the end and ground out a point. You can't start playing in the 80th or 85th minute and expect to win games. Just do the basics right. Once we started asking questions of their defenders, we looked dangerous.

"If there's one thing you can do, it's put a good ball in the box and ask questions of the defenders. That paid off anyway. With wingers out wide you're a man down in the middle of the park, and they've got good players that will then pass you off the park. We had good opportunities in the first half to just cross the ball, and we didn't ask enough questions of them."

Peterborough's Darren Ferguson: Two-nil up with 10 minutes to go, the game's done, well it should be done anyway. We just couldn't keep our composure, but up until that point I thought we were very good. It was just unfortunate that we couldn't see it through. At 2-1 we lost a little bit of composure.

"I've got to see the positives from tonight, that was more like us. If we continue that on consistent basis, we'll stay up. I'm convinced of it."