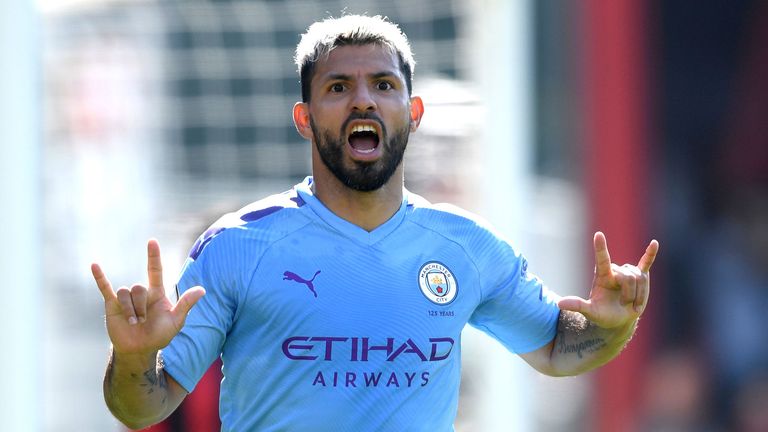 Two goals from Sergio Aguero and a Raheem Sterling strike eased Manchester City to a 3-1 win at Bournemouth.

Aguero opened the scoring in the 14th minute with a cool finish from inside the box before Raheem Sterling doubled City's advantage two minutes before the break after being played in by David Silva.

Bournemouth were given a lifeline in first-half stoppage time when substitute Harry Wilson - on for the injured Charlie Daniels - curled home a superb free-kick to reduce the gap to 2-1.

But Aguero showed his poaching skills again in the 64th minute to smash home his second after more good work from man-of-the-match Silva, who was making his 400th City appearance.

The result moves City up to second place in the table, two points behind last season's main rivals Liverpool.

How City recorded their ninth straight Premier League away win

City looked a little uncertain early on as Kyle Walker and goalkeeper Ederson were booked, the latter after charging out and taking out Callum Wilson near the touchline.

Chris Mepham returned to the Cherries starting XI in central defence while on-loan Liverpool star Harry Wilson only made the bench. The visitors made just one change, bringing in David Silva for his 400th appearance in a City shirt while Rodri dropped to the bench.

But with the game approaching the quarter-hour mark, Oleksandr Zinchenko's cross into the area was mishit by Kevin De Bruyne and fell into the path of Aguero, the Argentine taking a touch and calmly rolling his shot into the corner of the net.

Raheem Sterling had scored eight goals in his previous seven games against Bournemouth and added to that tally in the 43rd minute when latching on to a David Silva pass and lashing the ball past Aaron Ramsdale.

The injury to Daniels meant six minutes of added time in the first period and, in the third of those, on-loan Liverpool winger Wilson added to his reputation for being one of the best dead-ball experts around by finding the top corner with a brilliant free-kick to cut City's lead in half.

He was given the chance after Aymeric Laporte had fouled Callum Wilson 25 yards out.

Bournemouth kept City honest and Ederson had to make some important stops but Aguero delivered what proved the killer blow with his second of the game - and 400th in club football - with another piece of quick thinking in the area.

David Silva danced into the Bournemouth box and, when the ball broke loose, Aguero was first to react to smash home and bring up his landmark.

City, who have now won nine straight away games in the Premier League, were far from their brilliant best but always looked as if they had extra gears.

And a favourable fixture list - this was the first of nine games against sides who didn't finish in the top six last season - gives them the ideal chance to put more pressure on Liverpool. 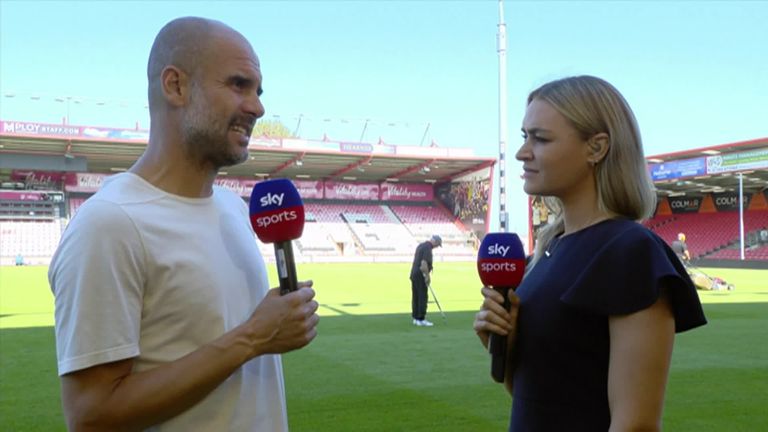 Man City boss Pep Guardiola shares his thoughts after they won 3-1 away at Bournemouth and admits they still need to be more solid defensively.

"We made three points and it is a big compliment to the players. We have a few things to improve, that's good that it has happened while winning games. But we knew it. They set up so deep, 5-4-1, long balls are so strong with King, Wilson, Billing and the set-pieces with Cook throw-ins into the boxes, they are stronger than us. But, okay the quality of the players in the front made the difference and we won the game." Eddie Howe says he won't criticise his players after his Bournemouth side lost 3-1 to Manchester City.

"We had our chances and that was the frustrating thing. If you compare this game to our previous encounters against Manchester City, I think that was the most we have created by a long way. I thought we were a constant menace to them. Physically, we were good because it was a really tough afternoon. We were without the ball for long spells, we had to really dig in and the lads left everything on the pitch which is all I can ask of them."

Man of the Match - David Silva

Playing his 400th game for City, the little Spanish magician was at his impish best.

Bournemouth could never contain Silva and he did what he's done throughout his career, popping up between the lines and threading passes through to forwards who must just simply love playing with him.

Silva had a direct hand in two of the three goals and came close to bagging one for himself with a fierce volley.

A stroll in the sun, we'll miss him when he's gone.

Manchester City have won all nine of their top-flight games against Bournemouth - the best 100%-win record by a team over an opponent in top-flight history.

Bournemouth have lost four of their last seven home Premier League matches (W1 D2 L4), as many as in their previous 18 at the Vitality Stadium.

Man City midfielder Kevin De Bruyne registered his 50th Premier League assist in his 123rd appearance, reaching the tally in the fewest number of games in the competition's history.

Sergio Agüero's second goal was his 400th career goal for club and country, with 235 of those coming for Manchester City.

Bournemouth host League Two Forest Green in the Carabao Cup on Wednesday night before travelling to Leicester in the Premier League next Saturday, while Manchester City take on Brighton at the Etihad in a 3pm kick-off the same day.