By Charlotte Marsh at the Amex 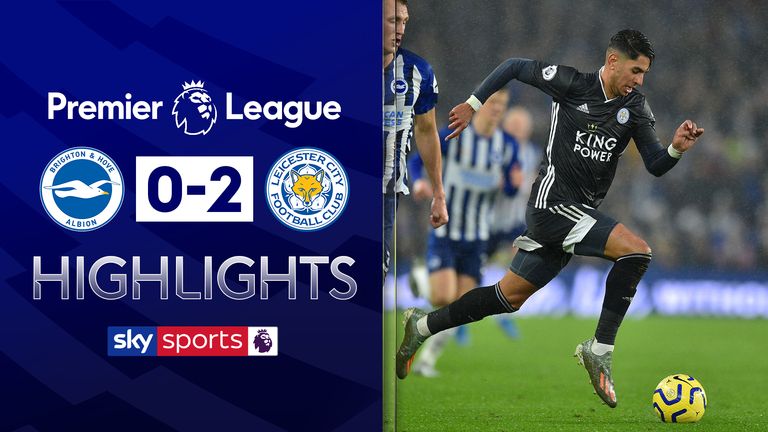 FREE TO WATCH: Highlights from Leicester's 2-0 win against Brighton in the Premier League.

Leicester battled to a 2-0 win against Brighton, with VAR making a dramatic late penalty call, and extended their winning Premier League run to five games.

A goalless first half was followed by an incident-packed second and Leicester took the lead in a classic counter-attack which was finished off coolly by Ayoze Perez (64).

Leicester were awarded a penalty in the 78th minute, won by Demarai Gray just seconds after coming on, but VAR drama ensued. The technology confirmed it was a spot-kick, but Vardy saw his first effort saved before James Maddison nodded home the rebound.

However, the goal was disallowed by Graham Scott at Stockley Park for encroachment from both teams and the penalty was retaken. Vardy did not miss a second time, sending Mat Ryan the wrong way and wrapping up the win.

Leicester are still in second place, eight points behind leaders Liverpool, who beat Crystal Palace, and one ahead of Manchester City, who beat Chelsea on Saturday Night Football. Brighton remain in 12th with 15 points.

How Leicester continued their winning run

Leicester made a lightning start and had two glorious chances early on. Perez pinged a header onto the crossbar from a tight angle inside two minutes as Solly March struggled to see a Harvey Barnes cross out before Ryan pushed a Vardy header over with his fingertips following a Ben Chilwell free kick.

The Brighton goalkeeper was in action again just before the half-hour mark and it was Barnes again who was involved. Perez picked up a lovely forward pass from Wilfred Ndidi, holding off Dan Burn well before picking out the 21-year-old at the top of the area. He stuck, but forced another fingertip save from Ryan.

Man of the match: Jamie Vardy.

Brighton's best chance came in the 41st minute as they ended the first half strongly. The roars went up around the Amex as their team won a corner, which Aaron Mooy delivered. Shane Duffy was left completely unmarked in the middle and was allowed a free header, but he sent it well past the post.

The hosts began the second half strongly and were seeing all of the play, but it was a classic Leicester counter-attack that earned the opener in the 64th minute. Vardy exploded down the field before squaring the ball to Perez. The Spaniard then slotted home past Ryan to break the deadlock.

Both sides continued to see chances, Duffy heading just wide again in the 69th minute before Ryan made another save not long after. It was a carbon copy of the opening goal as Vardy drove down the field and waited for Maddison to catch up, but the midfielder was closed down well by the goalkeeper who saved his shot.

It was as the game entered the 80th minute that VAR began to play its part. Just seconds after coming on as a substitute, Gray went down in the area after having his foot trodden on by Adam Webster. The technology took a look and agreed with referee Mike Dean's decision to award the penalty, with Vardy stepping up. Uncharacteristically, the striker saw his effort saved by Ryan, but Maddison was there to nod home the rebound.

Leicester wheeled away to celebrate but as they did so, VAR was checking the goal for encroachment and with both teams guilty of doing so, Stockley Park ordered a retake. Vardy was given a reprieve and he did not miss a second time, showing why he is the Premier League's top scorer, as Leicester extended their Premier League winning run to five games.

Man of the match - Jamie Vardy

Vardy stepped up when Leicester needed him on Saturday. The Foxes were under pressure in the second half but it took one sensational break - which Vardy and Leicester are renowned for - to breach the Brighton defences. His assist for the first goal was well-timed and inch perfect, and he did it again not long after too.

But his cool head under pressure during the penalty melee is something to be admired. He would have been disappointed to miss the first but to take a second just after, showing very few nerves and dispatching brilliantly was a true test of his character.

He remains the Premier League's top scorer and has now scored in five consecutive games in the competition, netting seven goals in total in that run. He's also scored more Premier League goals than any other player in 2019 (24). 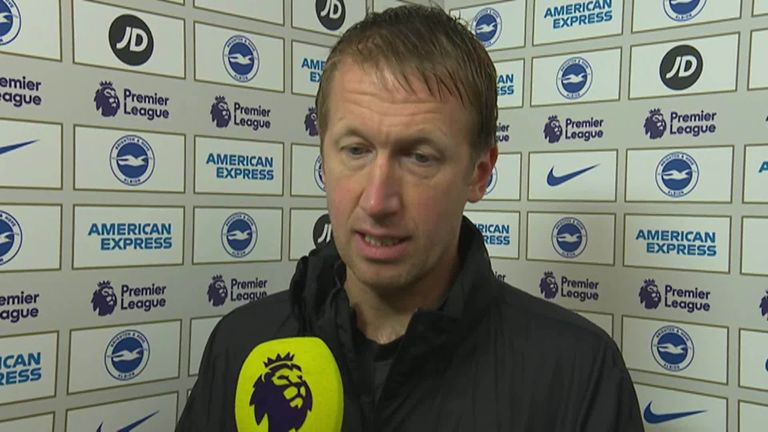 Brighton manager Graham Potter: "Leicester started better than us in the first half, we had to grow into the game and stick in there but you'd expect that against a team that have the quality and confidence Leicester have at the moment.

"Second half, we were a lot better but to concede in the manner we did is disappointing for us. Then it's hard to control their transitions, they're really dangerous on the attack and when they have the ball, they can hurt you with their quality. We did a lot in the second half that we can take forward but we have no complaints about the result.

"The disallowed penalty is the laws of the game, we just have to remind everybody of that, but sometimes it's the heat of the moment. As a defender, sometimes when the attacker goes in, you want to try and defend that situation so it's something we can do better but that's how it is." 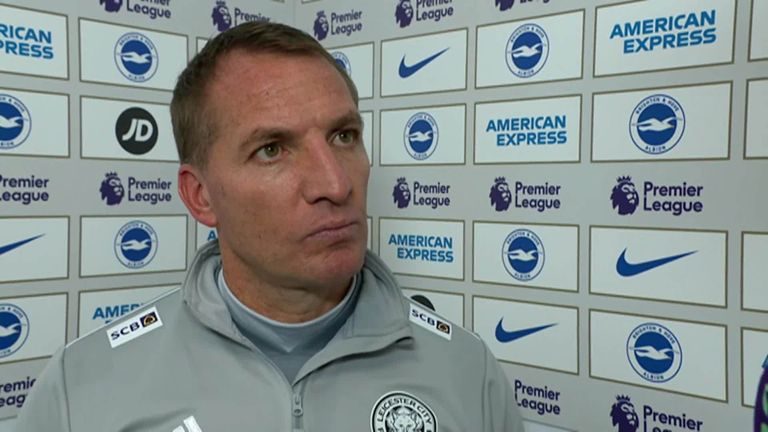 Leicester manager Brendan Rodgers: "Brighton are a good side so we knew this was going to be a tough game for us. We mostly controlled the first half and probably could have been a couple of goals up.

"They started the second half very well, we gave the ball away a bit, were a bit loose in our passing and we weren't as clean and tidy with it as we should have been. But in that moment, we stayed strong, compact and defended very well. We then got the first goal and from that, we were very good and could have added more.

"I think Mike [Dean] explained it to them [about the retaken penalty] and then we get told on the side why it was. When you see it on the big screen and see the encroachment, the Brighton player was the first player in. It was a great header from James [Maddison] from the rebound, but we would hope Jamie [Vardy] wouldn't miss the second one. Once we scored, we controlled it well from there.

"The team is playing very well and at a high level. We're also playing consistently, which is good but it's only 13 games. We're at the end of November and there's still a long way to go but it was an important win for us today and in the rain again, they can celebrate an away victory which was a very important three points."

It's a tough trip for Brighton next weekend as they take on Liverpool in the Premier League. For Leicester, they will host Everton on Renault Super Sunday (kick-off 4.30pm), live on Sky Sports.