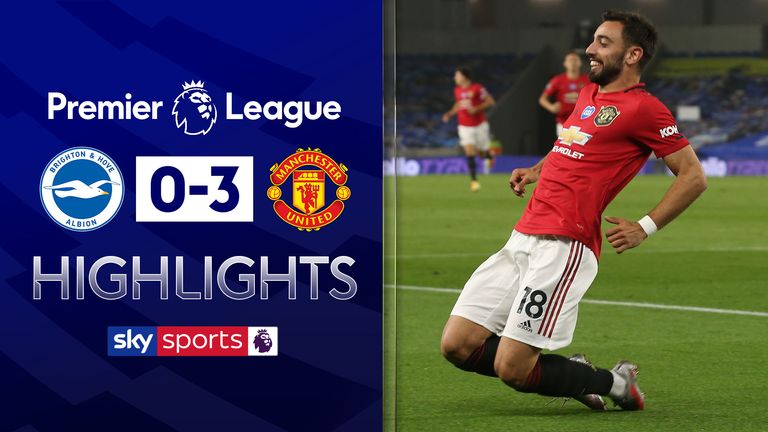 Bruno Fernandes stole the show as Manchester United remained in pursuit of a top-four finish with a comprehensive 3-0 victory at Brighton on Tuesday.

Mason Greenwood's sixth league goal of the season gave United the lead inside 16 minutes at the Amex Stadium before Fernandes combined with Paul Pogba to double their tally before the half-hour mark.

Fernandes then extinguished Brighton's second-half revival as his emphatic volley rounded off a devastating United counter within five minutes of the restart.

David de Gea prevented Aaron Connolly, Neal Maupay and the lively Leandro Trossard from registering a deserved Brighton consolation after an improved second-half display, but the damage was done as they tasted their first defeat since the restart.

The victory extends United's unbeaten run to 15 games and lifts them up to fifth, two points behind fourth-placed Chelsea ahead of their trip to West Ham on Wednesday. Brighton stay 15th, six clear of the relegation zone.

United had lost both Premier League trips to the Amex but Brighton's hopes of becoming just the sixth team to win three consecutive home games against Solskjaer's side were extinguished in an imperious first-half display.

Bruno Fernandes rattled a shot against the post on 12 minutes and it was a matter of time before the sustained pressure on the Brighton goal told.

Aaron Wan-Bissaka's threaded pass played Greenwood through one-on-one against Seagulls skipper Lewis Dunk and, after a couple of stepovers fashioned a yard of space, the United youngster found the net through his legs with a near-post finish.

United's attacking dominance saw Fernandes open his account on 29 minutes, with Pogba rolling the ball into the Portuguese's path before his deflected shot breached Mat Ryan at the near post for the second time.

Graham Potter introduced Maupay and Trossard at the break and Brighton made a marked improvement early in the second period. But no sooner had they looked to grab a foothold in the game, it was put out of sight.

A devastating counter that started with Harry Maguire heading clear ended with Greenwood hurtling down the left flank and standing a brilliant cross to the back post where Fernandes lashed a first-time effort home.

Trossard whistled a shot inches wide of the United goal on the hour before setting up Aaron Connolly for Brighton's best chance of the game, but De Gea proved more than a match for the Irishman's curling effort.

After Trossard flashed another shot wide, Maupay's late effort drew another fine save from De Gea as Brighton were denied a late consolation on a sobering evening on the south coast.

Brighton boss Graham Potter: "We played against a really good side tonight, Manchester United were the better team and they had some quality. Our response in the second half was really good and maybe deserved a goal but the better team won. I am proud of how the players stuck at it and kept going.

"We got killed on the counter-attack for the third goal but we had some good play but against United you are always on the stretch. It is a tough evening for us but one we will take a lot from and learn from it." 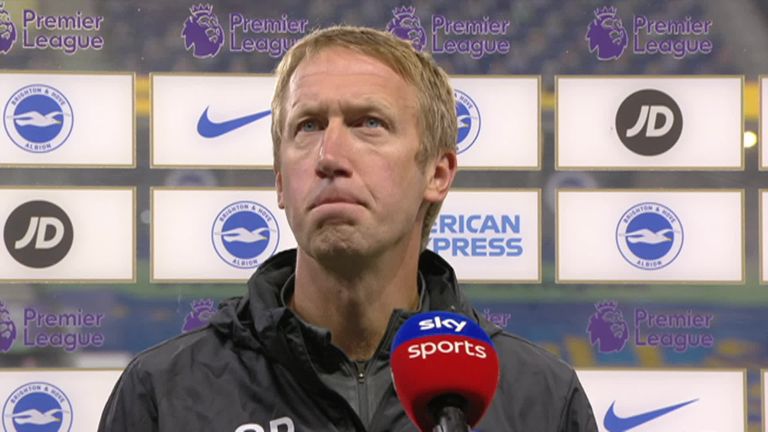 Man Utd manager Ole Gunnar Solskjaer: "The boys played some exceptional stuff. Mason's first goal was brilliant, and he played fantastically. His link up play was great today. He can go inside or outside, he is developing into a fine player.

"We know we have pace and we want to counter quickly, it was a fantastic goal [the third goal], we are very happy with it. I don't care about making a statement, I know we are a good team. We will recover and then focus on the next one." 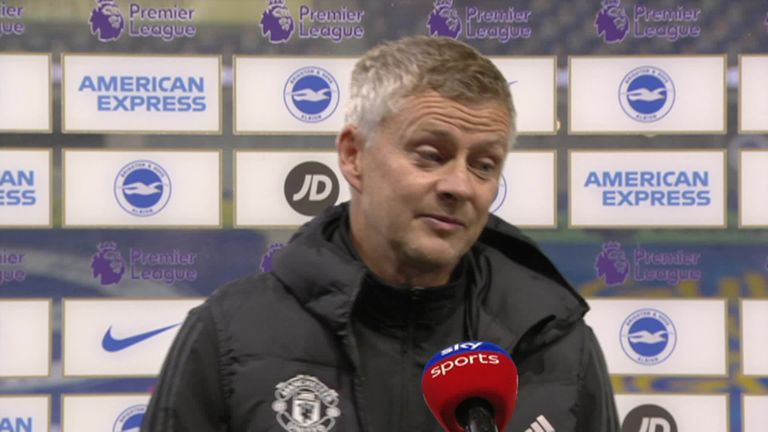 Head and shoulders above everybody else on the pitch with another timely reminder of the quality Manchester United have been able to secure.

Few players transform the fortunes of a club but, in Bruno Fernandes, it's clear United have signed a player with the quality, the arrogance, the class they have been craving.

'Right now, he is just one of the reasons to be excited about Manchester United again.

'This was one of their most convincing performances of the season against a Brighton side that had taken points off Leicester and Arsenal since the restart. United outplayed them and the result was never in doubt from the moment Greenwood fired the ball past Mat Ryan.

'Much of the plaudits will be sent in the direction of Bruno Fernandes... but Greenwood is beginning to add a new dimension to United on the right side of their attack.'