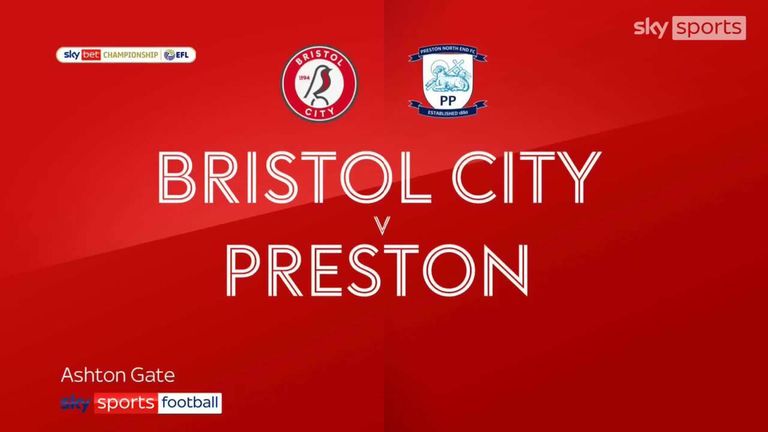 Bristol City's long wait for a home win continued as Preston held them to a goalless Championship draw at Ashton Gate.

The Robins have not taken three points on their own ground since January 26 and it was their 10th unsuccessful attempt to do so under manager Nigel Pearson.

North End goalkeeper Daniel Iversen made the best saves of an entertaining game, but his side also went close to a winner on several occasions.

And it was the 750 travelling fans, who were in jubilant mood at the final whistle.

Preston began brightly with City goalkeeper Dan Bentley saving at the feet of Sean Maguire and Sepp Van Den Berg firing over from a good position inside the first five minutes.

The home side's first effort came on 15 minutes, Chris Martin firing high and wide from a Matty James through ball.

Martin then played a one-two with Andreas Weimann only to be denied by a brave Iversen save.

City looked to be getting on top as centre-back Rob Atkinson stormed forward to strike a shot from 20 yards that was palmed away by the diving Iversen.

Nathan Baker's cross from the left then picked out Han-Noah Massengo inside the Preston box, but the midfielder elected to try and control the ball, rather than volleying it and the chance was lost.

The closing stages of the first half were dominated by North End. Maguire fired against the crossbar after breaking through the middle and moments later Ben Whiteman was inches off target from the edge of the box.

Maguire shot agonisingly wide of the far post from Daniel Johnson's incisive pass and City were grateful to hear the half-time whistle.

Pearson's men regrouped and began the second period on the front foot, Massengo seeing a brilliant 25-yard volley tipped over by the flying Iversen.

At the other end, Johnson's close-range effort was blocked for a corner. On the hour a better chance fell to Emil Riis Jakobsen, who volleyed wildly over.

Weimann did the same for City as both sides went all out for the opening goal. Preston were breaking dangerously and a Van Den Berg cross was deflected just past the near post.

Both managers made double substitutions in an effort to break the deadlock and City's final change saw Pearson send on striker Nahki Wells for full-back Zak Vyner.

Martin's free-kick was saved by Iversen after a foul on Massengo and the Robins forced a string of late corners without further testing Iversen.

Substitute Alan Browne headed straight at Bentley from Preston's final opportunity and a draw was a fair outcome.

Bristol City's Nigel Pearson: "We keep on being reminded about the home record, but it didn't seem to affect us today and all I saw was a team giving everything. If we continue to play with that amount of energy, drive, togetherness and commitment that elusive win won't be long coming. I have a good group of players, who want to do well, and they are more frustrated than I am in the dressing room about today's outcome.

"There were a lot of positives. Both sides could have won it, but we forced the best saves from their goalkeeper and I saw a lot to please me. The players are desperate to get that home win for the supporters and I couldn't fault the effort they put in. We have played well in all our home games this season and could have won the lot. It hasn't turned out that way, but I look at the bigger picture and can see positive things developing."

Preston's Frankie McAvoy: "The result could have gone either way, but I felt we edged the game and had chances to win it, particularly in the first half. It was a good contest and probably a fair outcome in the end. It's a decent day on the road for us. We probably didn't test their goalkeeper enough for the amount of good possession we had. But if you can't win on opposing territory, the most important thing is not to get beaten, so I'm happy enough.

"Bristol (City) may not have won at home for a while, but they are a good, strong side, with experienced players, who will put that right soon. Our squad is coming together nicely and the signs have been good in recent games. Our supporters were brilliant and I think they saw players giving their all."