Report and free match highlights as Lewis Dunk's header puts Brighton ahead in the first half; Johan Berg Gudmundsson atones for a defensive mistake for the opening goal with the Burnley equaliser; the two sides have now drawn eight of their last 11 league meetings 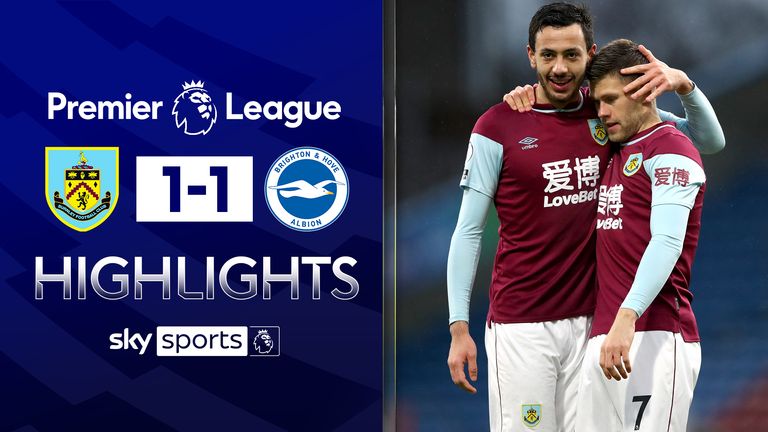 FREE TO WATCH: Highlights from the 1-1 draw between Burnley and Brighton in the Premier League

Brighton extended their unbeaten run to six games in all competitions with a hard-fought 1-1 draw at Burnley, who dominated the second half.

Both sides had picked up key wins at Liverpool in recent games, pulling away from the relegation places, and Brighton continued their good recent form when Lewis Dunk (36) nodded home in the first half at Turf Moor.

But Burnley were transformed after the break, dominating possession and chances. They deservedly equalised through Johann Berg Gudmundsson (53), who atoned for an earlier defensive error for Brighton's opener, and ended the visitors' count of 458 minutes without conceding in the Premier League.

The hosts will be slightly aggrieved they could not find another goal to take all three points, but faced an inspired Robert Sanchez, who twice denied Matej Vydra in the second half. The two sides have now drawn eight of their 11 league meetings.

Burnley remain in 17th but move nine points clear of Fulham, who face West Ham later on Saturday, live on Sky Sports. Brighton stay in 15th with an 11-point gap to the bottom three as their unbeaten run continues.

It took a little while for things to warm up at a wet and windy Turf Moor, but Burnley had the first sights of goal just before the half hour. Dwight McNeil took a low free-kick that sped under the wall and forced a quick save from Sanchez. Just after, the Brighton goalkeeper showed off his reflexes again as he pushed away a poked effort from James Tarkowski at close range.

But in-form Brighton took the lead in the 36th minute. It was a classic defender's goal from Dunk as he nodded home a Pascal Gross corner. Gudmundsson had been waiting at the post to try and keep out such a delivery, but the ball flew past his flailing leg all too easily.

The goalkeepers were called upon in the remainder of the half. Nick Pope - who was mostly a bystander throughout - made a superb fingertip save to keep out an effort from Aaron Connolly. Then, with almost the final kick of the opening period, Sanchez made a high, one-handed save to once again deny McNeil.

Sean Dyche must have given a rousing half-time team talk as Burnley dominated the second half and equalised eight minutes after the break.

The goal was almost scored by sheer pressure, with Burnley peppering the Brighton area with shots and crosses in quick succession. Erik Pieters' fierce shot from range forced another superb save from Sanchez, but the loose ball landed to the waiting Gudmundsson in the middle. With Sanchez still sprawled on the floor, the Iceland international drove the ball home, atoning for his earlier error.

Burnley had the ball in the net again shortly after, but it was ruled out for offside. Ashley Barnes' initial shot was blocked by Ben White, but the ball was recycled well by Vydra and Gudmundsson. The latter's cross in was nodded home by Barnes, but the linesman's flag was raised.

Sanchez twice denied Vydra as Burnley continued to hunt for another goal. The goalkeeper made a leaping save as Vydra attempted to play the ball back through the area, but the offside flag was up again to penalise the striker. The second save was more impressive, standing tall to keep Vydra at bay after some lovely Burnley build-up play.

Burnley's dominance tailed off towards the end of the game as it ended in yet another draw, their 11th of the season.

As much as Burnley's play improved after half-time, so did Gudmundsson's. He was afforded much more space to roam and create, making two key passes. He was vital in the equaliser, not just because he scored, and also set his team-mates up for other openings.

There is no getting away from the fact he should have kept out Dunk's header on the line, but he put an error behind him to shine in the second half. 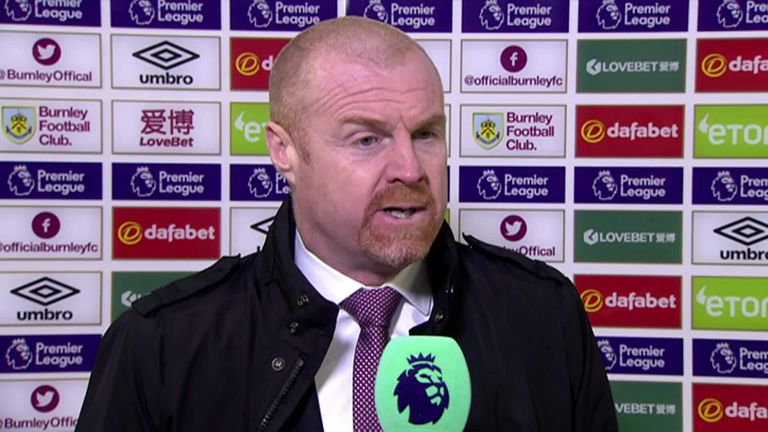 Burnley manager Sean Dyche said: "It's a decent point because you've got to respect the outfit you're playing against and they're a good outfit on a really good run.

"But I think there's a little bit of disappointment because we were so dominant, particularly in the second half. In the first half, we got into good positions and we were close. With the goal, they're a really physical side, they've got some big players so sometimes that happens.

"In the second half, I thought we were outstanding, the way we took on the game both in and out of possession, asking so many questions of them defensively. It doesn't always happen to us but we got 20-plus chances, which is a lot for a team that is sometimes questioned about that.

"But it was also the quality of the chances, my only gripe is that we didn't quite finish them with that clinical moment." 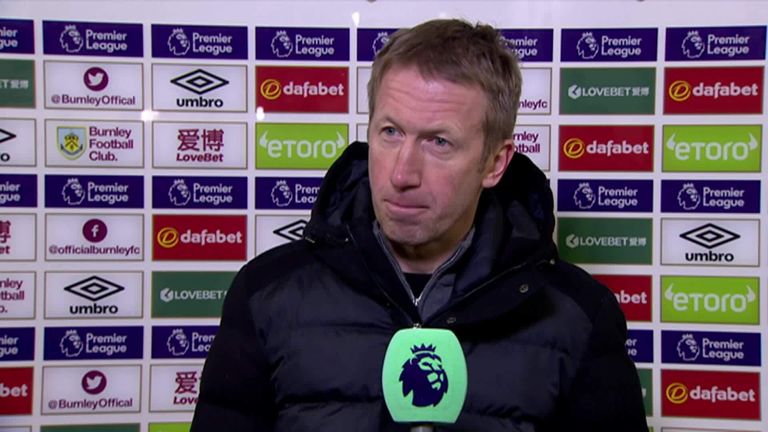 Brighton manager Graham Potter said: "It was a hard-earned point, a tough game against a good opponent and Burnley pushed us in the second half all the way.

"I can't say we deserved any more than a point but after the week we've had, it's been a fantastic, seven points with two away matches so we're happy with that and we move forward.

"I felt the game had got away from us a little bit [in the second half], credit to Burnley because they were on the front foot and the goal can do that to you. So we put Danny [Welbeck] and Leo [Trossard] on to be more of a 4-4-2 and put a bit more pressure on them.

"The points this week makes a difference for us. Since the turn of the year, we've managed to pick up points and keep things going so that's a positive for us. We can't play well every week and every game but it's important that when you're not at your max, you can pick up something and we did that today."

"Brighton were the better side in the first half but Burnley were on the front foot in the second. Vydra looked really lively; his performance deserved a goal. Sanchez will be disappointed [with the equaliser] - he parries it back into the mix rather than away, though it's a good finish.

"Brighton were hanging on in the second half but, all in all, a draw was probably a fair result. I think both teams will be safe and Burnley will benefit from having Wood and Barnes back together."

Burnley are in FA Cup fifth round action in midweek as they welcome Bournemouth to Turf Moor on Tuesday. Brighton will travel to Leicester in the competition on Wednesday.