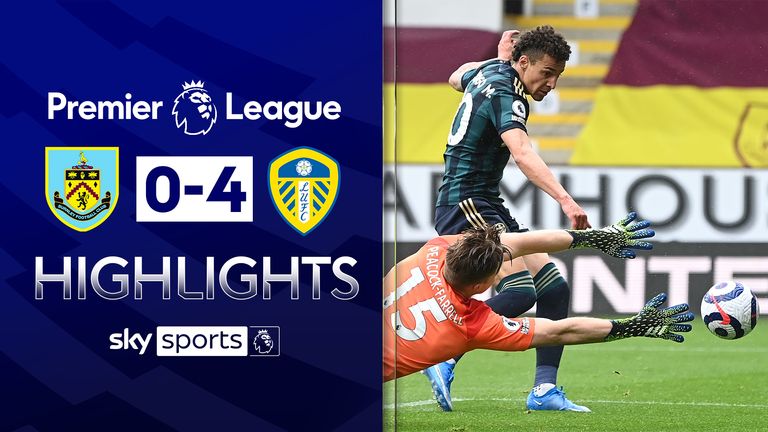 FREE TO WATCH: Highlights from Leeds' win at Burnley.

Super-sub Rodrigo's late double helped Leeds to a crushing 4-0 win at Burnley to cement their hopes of a top-half finish.

Marcelo Bielsa's side could still mathematically qualify for Europe but can realistically have eighth place in their sights after a second win in a row, sealed in style by their record signing in the final 15 minutes, while Burnley's ninth top-flight home game without victory is now the longest run in their history.

Mateusz Klich had set the ball rolling a minute before the break when he capped a typically dangerous break by curling past stand-in goalkeeper Bailey Peacock-Farrell from 20 yards.

Jack Harrison doubled the lead on the hour mark with a deft flick turning home Ezgjan Alioski's shot from a corner, before Rodrigo worked his magic.

The Spanish striker, who has undergone a season of transition at Elland Road, took himself past two defenders with a perfect first touch before dinking over Peacock-Farrell (74), then latched onto Harrison's pass and rounded the 'keeper to add a quickfire second (76).

With around £2m per position in prize money to play for, there was far more than pride at stake at Turf Moor but without fans, the Clarets have found results on home soil hard to come by and have not won at their own ground since January 27.

They sprung into life early against their Yorkshire neighbours without testing Illan Meslier, while Peacock-Farrell was called into action from Leeds' first chance of the afternoon, turning Patrick Bamford's near-post effort away to safety.

The visitors' top scorer saw little else of the ball before the break as those around him threatened instead to open the scoring. Pascal Struijk should have buried a header from a corner but planted it wide when unmarked.

Klich didn't make the same mistake from a Leeds break shortly before the interval, taking advantage of the space given 20 yards out to bend the ball around Peacock-Farrell with a classy finish.

Burnley briefly spluttered into life again at the start of the second half, finally getting the ball into their two front men, and should have levelled when Matej Vydra met Chris Wood's return, but was denied by Meslier's legs.

On the hour mark Leeds doubled their lead, taking advantage of more unusually lax defending from set pieces as the unmarked Alioski's shot from the edge of the box was flicked home by Harrison.

Moments before that Bamford had been withdrawn after one of his quieter performances in a Leeds shirt and his replacement, Rodrigo, would go on to stake his claim for a starting role in his favoured position.

Johann Berg Gudmundsson wasted another fine opportunity for Burnley to get themselves back in the game by shooting straight at Meslier when clean through, but that was as much as they offered after the interval.

Instead the Spanish sub stole the show, first setting himself exquisitely to beat Peacock-Farrell from Harrison's pinpoint pass, before the two combined again on the break to round the goalkeeper and earn Leeds a thumping win.

Burnley boss Sean Dyche told BT Sport: "It's only harsh in that they were clinical. The game panned out as we expected, they want to make it like a basketball match, we started well and stopped that.

"Then we allow a goal that's to their liking, they get two in front and we have golden chances - you can't miss them. They're a side that do concede as well as score, and they took their chances, we didn't.

"It's hard to ask a lot more of my players, they've given a lot to the cause this season and there was a big result in an emotional game on Monday. I was probably expecting us to be more off it, physically, than we were."

Leeds head coach Marcelo Bielsa told BT Sport: "In the first half we kept going until we managed to score, defended well, in the second half we didn't defend as well but we were efficient and had chances at goal.

"Against big spaces it's easier to attack, and when the opponent is losing they take more risks, but as you can see we conceded chances in the second half that we didn't in the first.

"Rodrigo drops deep a bit more than Bamford, in the beginning of the second half we needed to link the defence with the attack more."

Man of the match - Jack Harrison

Rodrigo will take the headlines, but both of his goals were made by excellent passes from Harrison, who also added one of his own with an exquisite flick.

The 24-year-old has gone under the radar in the Premier League but not at Elland Road. He's second only to Bruno Fernandes among midfielders across the division in terms of goal involvements this season (16), including three at Turf Moor.

Leeds are also back on Sky when they visit Southampton on Tuesday night on Sky Sports Premier League from 5pm; kick-off at 6pm.