Free highlights and match report as West Brom cope with Semi Ajayi sending off but fail to secure crucial victory in survival bid; Baggies remain 19th in the Premier League, 11 points from safety having played a game more than the clubs above them 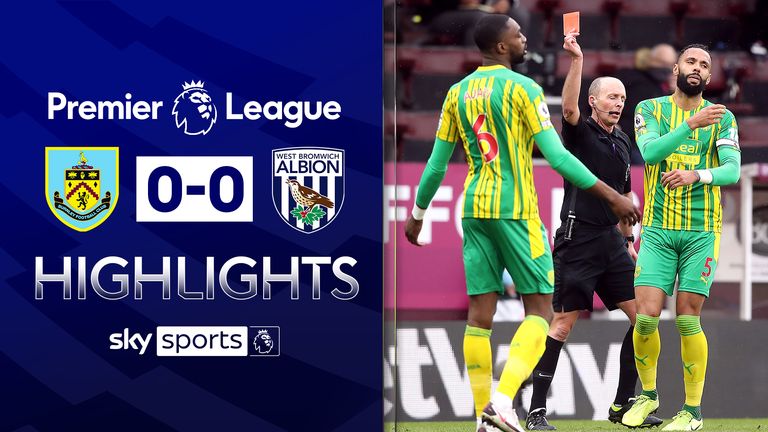 FREE TO WATCH: Highlights from Burnley’s draw with West Brom in the Premier League

West Brom weathered Semi Ajayi’s first-half dismissal to secure a 0-0 draw at Burnley, but the visitors were left to rue a host of missed gilt-edged chances to boost their Premier League survival bid with a victory at Turf Moor.

The Baggies played more than an hour of the match with 10 men after centre-back Ajayi was sent off by returning referee Mike Dean for a handball that denied Burnley striker Matej Vydra a goalscoring opportunity.

Sam Allardyce would have snapped your hand off for a point and third clean sheet of the season when Ajayi was given his marching orders, but West Brom should have had so much more.

In a final 20-minute flurry, Ainsley Maitland-Niles blazed over, January signing Mbaye Diagne clipped the bar and Matheus Pereira swiped at thin air with the goal at his mercy before seeing a follow-up shot cleared off the line by James Tarkowski.

As a result, the 19th-placed Baggies missed the chance to substantially reduce the gap between themselves and safety, which now stands at 11 points, while Burnley remain 15th, nine points clear of the relegation zone.

Man of the Match: Kyle Bartley.

In blustery conditions at Turf Moor chances were at a premium. The first fell for Burnley inside nine minutes when Matt Lowton's first-time cross found Jay Rodriguez, but he glanced well wide of the target.

Burnley would struggle to create anything of note from there on in, with the Baggies growing as an attacking threat as the half progressed.

Darnell Furlong curled wide after brilliant close control from Conor Gallagher had set a shooting opportunity up for the full-back, before Pereira went close on two occasions.

After curling a shot over from 20 yards, the Brazilian followed it up with a crisp low drive which was heading for the bottom corner until a fingertip save from Burnley goalkeeper Nick Pope tipped it around the post.

But the Baggies' momentum was stopped in its tracks on the half-hour mark when Vydra was prevented from running through on goal by centre-back Ajayi.

Despite initially letting play continue, referee Dean was instructed to take a second look on the pitchside monitor where Ajayi was adjudged to have prevented a goalscoring opportunity and shown a straight red card.

The dismissal promoted an enforced change from Allardyce, as Dara O'Shea replaced the sacrificed Matt Phillips to shore up the depleted defence, but far from weakening the Baggies, the decision only emboldened them.

Burnley's attack was contained and restricted to just a single attempt on target for the remainder of the game, the closest the Clarets came to taking the lead occurred when Baggies midfielder Okay Yokuslu nearly diverted the ball into his own net.

And that resolute rearguard action laid the foundation for West Brom's late assault on three points. It started with Maitland-Niles firing over after cutting onto his right in the area before, seconds later, Diagne clipped the crossbar from six yards after skipping past Tarkowski.

With Burnley stretched, West Brom created their best opportunity soon after, but Pereira was unable to convert Maitland-Niles' selfless square pass, swiping at thin air, before seeing his second attempted headed off the line by Tarkowski as three points slipped through their fingers. 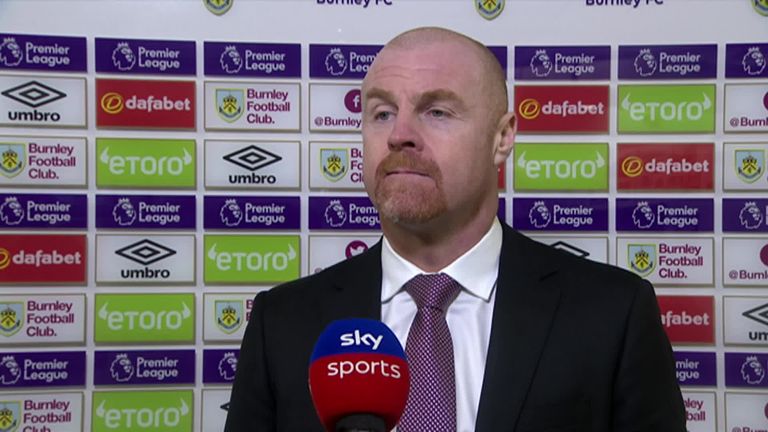 Burnley boss Sean Dyche said his side were 'miles off the pace' as they drew 0-0 with West Brom.

"We were better against 11. Against 10 we didn't really find the extra man, too many sloppy passes and they could have nicked it. Over a season's work a clean sheet is a pleasing thing and it is another point on the table.

"We are not the real deal and we are so stretched so I accept the point. We have a little free week so we want to get our players fit and sharp and hopefully we will have a stronger group available." 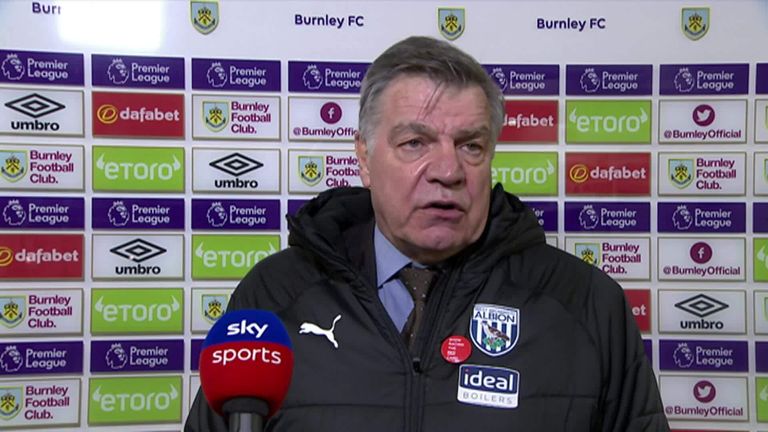 West Brom boss Sam Allardyce says his side were unlucky not to take all three points from their game against Burnley.

West Brom boss Sam Allardyce: "You are playing against the odds and we were comfortable before we went down to 10 men but going down 10 men is usually an uphill battle, but we actually started to take more control.

"Golden chances were created in the second half that unfortunately we did not take. The quality of the performance here today shows we have come a long way in a short period of time. The sad thing is it hasn't brought us three points.

"We have to start doing the final side of performances which is putting the ball in the back of the net and winning games. Our overall performance was absolutely fantastic all of the game. I can't praise the lads enough. They were magnificent today. You need a bit of luck to go your way when in this position."

Man of the Match - Kyle Bartley

Many sides in a more favourable position than the one West Brom find themselves in the table would have folded under the pressure of playing 60 minutes a man down, but quickly reorganising the defence following Ajayi's dismissal was crucial in the Baggies' encouraging display - and captain Kyle Bartley was at the centre of it.

There were a few close calls, the odd unsuccessful Burnley penalty appeal here and there in which Bartley was involved, but the centre-back marshalled things superbly at the back, laying the foundation from which his attacking colleagues should have won the game.