Match report as Scott Brown sets up Odsonne Edouard for Celtic's second after David Turnbull opener; Kristoffer Ajer and Karamoko Dembele add goals against depleted St Johnstone; Brown set to join Aberdeen at the end of the season after 14 years at Celtic 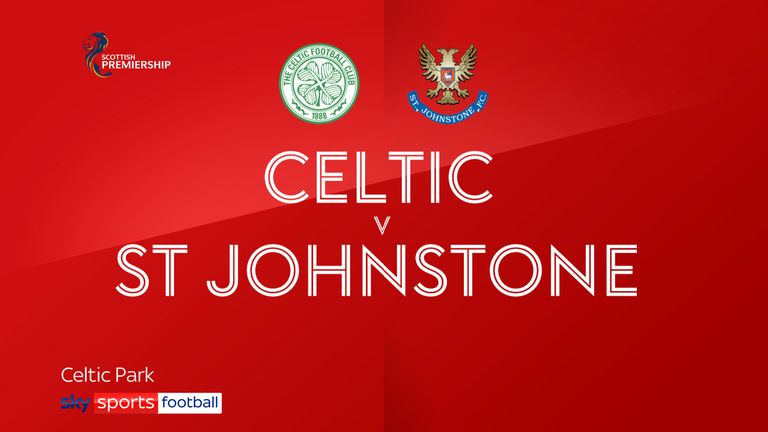 David Turnbull had netted the opener 60 seconds earlier after loan goalkeeper Zdenek Zlamal had been controversially penalised for picking up a passback.

Zlamal had been pitched in for an unexpected Saints debut with the visitors without more players amid what manager Callum Davidson termed an ongoing issue with Covid.

Aberdeen-bound Brown arrived to a welcoming party of fans outside the main entrance and there were several banners in his honour in the stands as he led the team out for the final time at Celtic Park.

The 35-year-old was presented with a silver salver by outgoing chief executive Peter Lawwell before the game to mark his 14 years of service, and got a standing ovation from the directors box and substitutes after being replaced by Ismaila Soro.

There was a debut as well as a swansong as Adam Montgomery lined up at left-back for Celtic. The 18-year-old delivered a composed and confident display in possession as well as a goal-saving intervention.

Saints had not trained since their Scottish Cup semi-final triumph after losing four players to self-isolation for Sunday's win over St Mirren. They had further absentees at Celtic Park with Zander Clark, Liam Gordon, Ali McCann and Michael O'Halloran missing from their 16-man squad.

With Charlie Gilmour making his first start, the visitors started well. The stretching Chris Kane could not steer the ball on target after James Brown headed across the face of goal.

The game turned on a moment of controversy when Zlamal picked up after wing-back Brown knocked the ball backwards. Davidson could not believe referee Bobby Madden had deemed the action deliberate and his mood worsened when Turnbull drove inside the near post from 16 yards following the indirect free-kick.

Scott Brown soon had his moment as Edouard finished in style from his long pass, the French striker producing a brilliant take, cutting inside Shaun Rooney and dinking over Zlamal.

Vasilis Barkas was making his first Celtic appearance since January after Scott Bain injured a finger and the Greek goalkeeper produced a decent save at full stretch to deny Kane.

Celtic set about adding to their lead. Turnbull curled wide, Rooney cleared off the line from Ryan Christie and Zlamal made saves from Edouard and Christie.

Montgomery cleared off the line from Craig Conway before making way for Greg Taylor when Brown was taken off in the 63rd minute.

The remainder of the chances came at the other end. Zlamal denied Edouard at close range before the Frenchman inadvertently blocked Mohamed Elyounoussi's follow-up.

The loan 'keeper produced good saves from substitutes Taylor and Leigh Griffiths but was beaten by Ajer's heavily-deflected effort from inside the box in the 79th minute.

Dembele raced on to Turnbull's through ball and found the net from a tight angle six minutes later.

With Livingston losing 3-0 to Rangers, the scoreline was enough to keep Saints above the West Lothian side on goal difference ahead of their shoot-out for fifth place on Saturday. 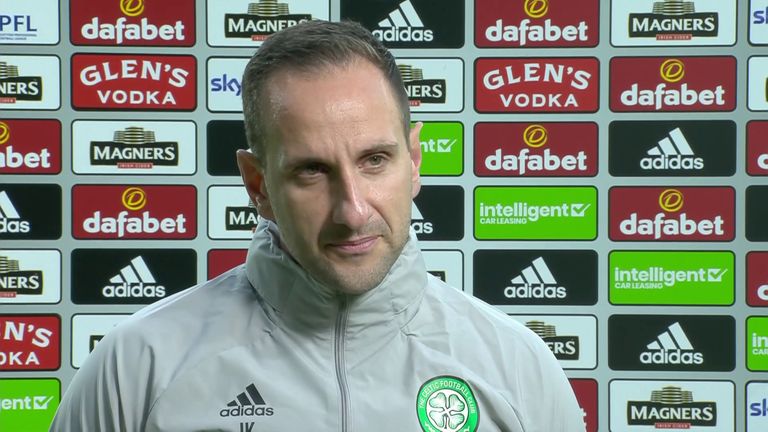 Celtic interim manager John Kennedy: "That was the motivation for us, when you come to the end of the season and there's not a lot to play for, that was easy for us with Scott leading the team out for the last time at Celtic Park.

"It was important we put in a performance that sent him off in the right manner, which we certainly did.

"The plan was, because we have a quick turnaround until Saturday, he knew he would come off after 60 minutes regardless.

"But the saddest thing was the stadium wasn't packed to the rafters with people singing his name the whole game. But that's the world we live in.

"But there was the staff and players and an element of the support outside to send him off. It's probably the best of a difficult situation. 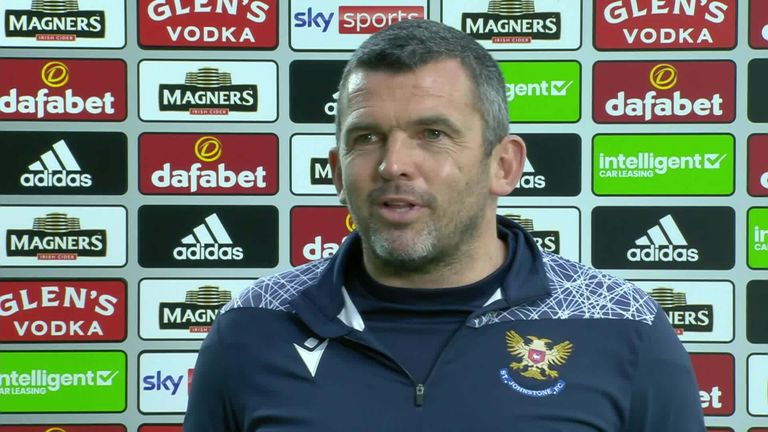 St Johnstone manager Callum Davidson praised his players' attitude as a depleted squad due to coronavirus issues, was beaten 4-0 at Celtic

"In the last few days he is starting to take it all in, I have seen him spending more time around the offices and speaking to more people, and it's probably now in his final week it is hitting home that he has to cherish what he has got left.

"We will cherish every moment we have got him for the final few days for what he has done as a player and captain for this club. We have to be grateful and hopefully send him off in the right way on Saturday."

St Johnstone manager Callum Davidson: "[St Johnstone's Covid situation] is very concerning. I think the whole world is concerned about Covid, so it's not just me, but it's not a nice situation to be in.

"We're doing our best with everybody, we're not experts on it, so we're trying to get as much help as we can to make sure we're all safe. We followed Government guidelines and it's paramount we keep them safe.

"We'll get three or four of the players back tomorrow [Thursday], which is great, and the good news is that they're all asymptomatic, so they are not suffering at all. We must try to stamp it out and we can't let it fester until next week."

Celtic finish their Scottish Premiership season with a trip to Hibernian on Saturday, while St Johnstone host Livingston. Both games kick-off at 12.30pm.