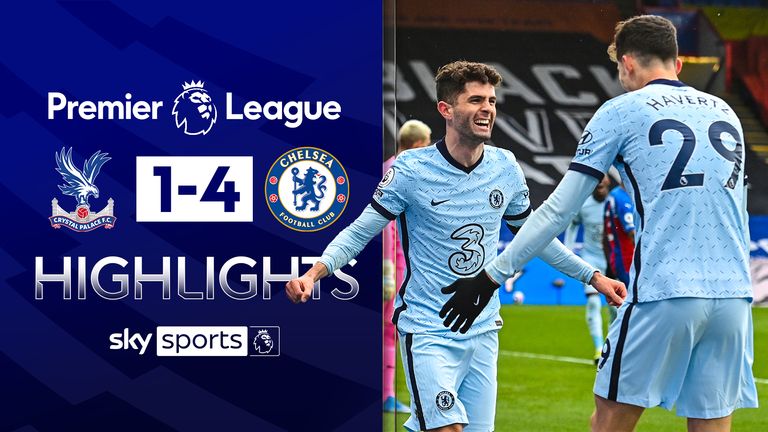 FREE TO WATCH: Highlights from Chelsea’s win over Crystal Palace

Chelsea moved back into the Premier League top four as Christian Pulisic scored twice in an impressive 4-1 win against Crystal Palace at Selhurst Park.

Liverpool's dramatic 2-1 win over Aston Villa earlier on Saturday had squeezed Thomas Tuchel's side out to sixth prior to kick-off, but Kai Havertz struck inside eight minutes to ease any fears of another set-back following last weekend's 5-2 defeat at home to West Brom.

Chelsea doubled their lead just two minutes later when Havertz turned provider for Pulisic to rifle in a quickfire second and Kurt Zouma extended the visitors' lead when he headed in his fifth goal of the season (30).

Palace had offered very little, but found a route back into the game when Christian Benteke headed in at the far post (63), but Pulisic capped a routine win for Chelsea from close range as Tuchel's men responded in this absorbing race to qualify for next season's Champions League. Palace remain in 13th place on 38 points.

Man of the match: Mason Mount.

Chelsea are still yet to lose on the road under Tuchel in the Premier League, with the German becoming only the second Blues manager to avoid defeat in his first six away games in the competition along with Felipe Scolari.

The opening half was like a training game for the visitors with Palace unable to lay a glove on them. It only required eight minutes for Havertz's second Premier League goal to give Chelsea an early lead.

After dominating the opening exchanges, the former Bayer Leverkusen playmaker collected Callum Hudson-Odoi's pass and curled beyond Vicente Guaita from inside the area moments after Pulisic had been denied by the Spaniard at the near post.

It was 2-0 within 120 seconds as Pulisic ran onto Havertz's cut-back and smashed into the roof of the net from a tight angle following more statuesque Palace defending.

Palace manager Roy Hodgson was by now staring down the barrel of a seventh consecutive Premier League loss to Chelsea, and things got worse with half an hour played as Zouma headed home a Mason Mount free-kick to make it 3-0.

Co-commentator Chris Coleman said on Sky Sports: "Crystal Palace are all over the place defensively at the moment and Roy won't be happy with that. Chelsea are getting in at will here. This could get a lot worse."

It very nearly did as Antonio Rudiger's header from another Mount delivery was headed off the line by Patrick Van Aanholt. It capped a disastrous opening period for Palace, with frustration getting the better of a number of players after Van Aanholt and Wilfried Zaha exchanged words.

Palace had just two touches in the opposition box during an entirely toothless opening half in which they failed to muster a single goal attempt. By contrast, Chelsea had managed 12 and had scored three times in a single game for the first time in Tuchel's reign in his 17th game in charge.

Chelsea continued to play one and two-touch football with Ben Chilwell wasteful with a shot within two minutes of the restart.

The end product deserted the England full-back once more on the hour mark as his rising shot from Hudson-Odoi's cross cleared the crossbar, and Palace were given a glimmer of hope moments later following a double change.

Jeff Schlupp and James McCarthy replaced Ebere Eze and Jairo Riedewald, and it was Schlupp's cross that was powered home by Benteke, rising above Chilwell to notch his first goal at Selhurst Park since last July, against Chelsea.

Tuchel's men ought to have been out of sight, but a fourth goal settled any lingering nerves as substitute Reece James was found in space down the right and his cross was blasted in from close range by Pulisic to cap the biggest win of their new manager's reign to date. 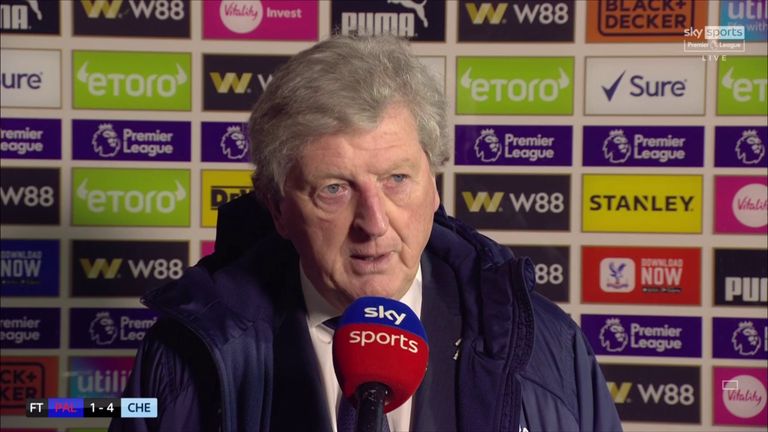 Crystal Palace manager Roy Hodgson says they need to do some soul searching as their first half against Chelsea was 'nowhere near good enough'.

Crystal Palace boss Roy Hodgson: "We know they are a good side, everybody knows that, but we can't afford to play the way we did in the first half.

"Both of the first goals came about through balls lost near our own goal. Suddenly they find themselves 2-0 up after 10 to 11 minutes. We needed to defend well and make good decisions.

"But we came in at half-time 3-0 down. How many teams can come back from 3-0 down against this Chelsea team? To give some credit, the players did better in the second half and showed some fight in them but the bottom line is we played against a Chelsea team that we believed we could stretch and we're on the back end of a 4-1 defeat and needed to do some last-ditch defending to keep it down to four." 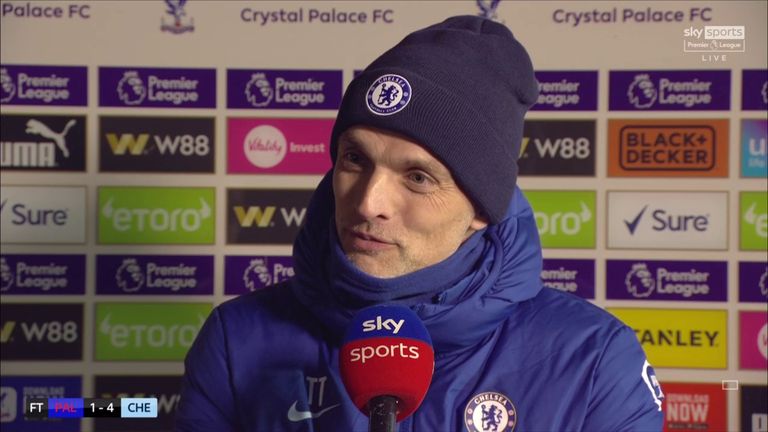 Thomas Tuchel says his Chelsea side were hungry, aggressive and creative in their win over Crystal Palace.

Chelsea boss Thomas Tuchel: "The first half an hour was excellent. We were very hungry, very aggressive and got a lot of recoveries in the final third. It was a deserved lead. After 35 minutes we dropped a little in position and got a little bit sloppy. We continued like this a little in the second half but it was a good reaction after their goal. We created a lot of chances and didn't concede any big chances.

"Clearly we had many chances today. The guys were hungry and creative. We had a lot of good runs and good movement. We put pressure on ourselves to have the right response. It was a step in the right direction.

"I am not disappointed [with Kai Havertz] but he could have actually scored more. He had two big chances to finish the game off. This is the way. He has absolute quality. He needs to show his quality and that is the challenge for him.

"Everything was bad against West Brom. The result was horrible but the stats were not as bad. Today we were very hungry, full of confidence and wanted to play a very aggressive game in terms of high recoveries. We were totally focused. It was good with the attitude today. It's a part of our DNA to be aggressive and should be. We showed that today.

"Of course I came to England for the targets, which was to finish in the top four. We have our own way to go. We need results continually. We had a set-back last week but it is not the moment to look at other teams all the time. We are in the middle of the race. It's the target to finish there but it will be tough until the last end."

Havertz showed signs of the player Chelsea bought last summer while Pulisic may grab the headlines with his two goals, but here was another virtuoso performance from Mount.

Chris Coleman told Sky Sports: "Mason is my man of the match. Overall with his movement and both with and without the ball, he's been superb."

The England playmaker set the tone and led the way for Chelsea to ensure there would be no hiccup, having more shots (5) than any other player while also producing an incredible 15 crosses, highlighting his ability to pop up in areas across the front line.

All four of Mount's Premier League assists this season for Chelsea have been for headed goals from set piece situations, with three of those being scored by Zouma.

Havertz: I must prove it across more games 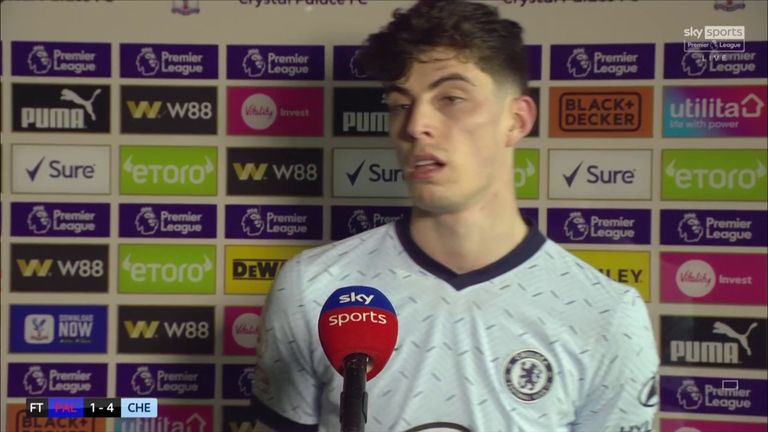 Chelsea's Kai Havertz tells Sky Sports he enjoyed playing in the false nine position as he scored in the 4-1 win over Crystal Palace.

Havertz scored and assisted in a single league game for the first time as a Chelsea player, last doing so for Bayer Leverkusen against Cologne in the Bundesliga in June 2020.

Havertz told Sky Sports: "I'm happy and the most important thing is that we won after the 5-2 defeat. It was a good game from us, we could've scored more goals but we'll keep on going. In my position, you always want to score.

"In the last few months it's not been easy and I've not had too many chances. Today, I had those chances and I could've scored one or two goals more. But I'm happy with the results. The false nine is a good position for me as I have the freedom to go wherever I want. I hope I can continue like this.

"In the second half, I had the chances to score more but now we focus on the second leg against Porto. It's always easy to play with players with real quality. After one game, it's easy to say we're a good attacking team but we have to prove that more. After the season finishes, we can then reflect on it. I have to prove this now across more games."

Crystal Palace have no fixture next weekend but return to action on April 26 away to Leicester, live on Monday Night Football; kick-off 8pm.

Chelsea host Porto in the Champions League quarter-final second leg at Stamford Bridge on Tuesday before facing Manchester City in the FA Cup semi-finals next Saturday at 5.30pm.