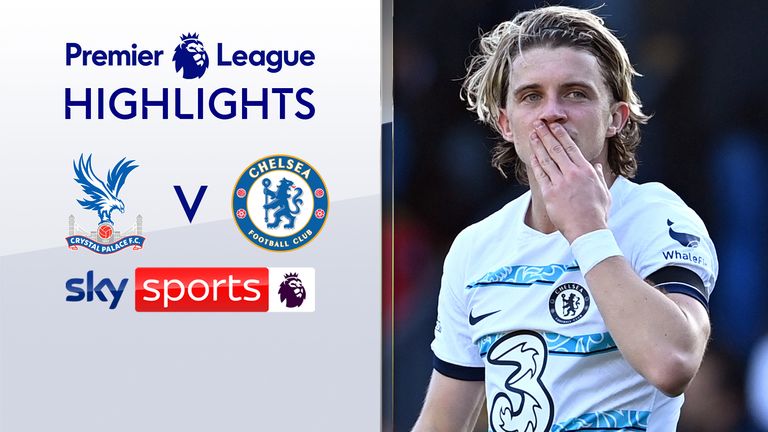 Highlights from Chelsea's win against Crystal Palace in the Premier League

The Blues looked to be heading for another frustrating 1-1 draw - the same scoreline they achieved at home to Red Bull Salzburg in Potter's first game in charge 17 days ago - with Pierre-Emerick Aubameyang's goal all they could manage in response to Odsonne Edouard's early strike.

But Gallagher, who spent a hugely impressive season on loan at Palace before returning to his boyhood club this summer, had other ideas, bending a stunning effort past the desperate dive of Vicente Guaita and into the top corner as the game ticked into stoppage time. Gallagher's goal - his first for Chelsea - ensured his side extended their winning run against Palace to 11 matches and moved up to fifth in the Premier League, while Palace remain just two points above the drop zone.

The habit of failing to turn dominant possession into points thanks to wastefulness in front of goal and carelessness in defence was regularly bemoaned by Thomas Tuchel, and it felt as though the message was soon to be repeated by his successor.

Chelsea started brightly in south London, with Kai Havertz and Mason Mount floating behind Aubameyang and Raheem Sterling in a fluid attacking set-up, but they proceeded to concede after less than impressive defending from Wesley Fofana.

The £70m-centre-back gifted the ball to Palace in his own half before failing to track the run of Edouard, who was free to turn home Jordan Ayew's right-wing cross after just seven minutes.

As is often the case with this Chelsea team, the blow of allowing their opponents to score appeared to shake them, and it was only thanks to Kepa Arrizabalaga - starting in place of the injured Edouard Mendy - that the damage wasn't more severe.

But gradually Chelsea recovered their composure and were rewarded shortly before half-time by Aubameyang, whose sharp finish on his league debut for the Blues was welcome following earlier misses from Mount and Sterling.

Palace were aggrieved that Thiago Silva, who provided Aubameyang with the assist, was still on the field after he survived a potential-red-card check by the VAR for handling the ball as the last man as Palace sought to break on goal.

In contrast to the first half, the second passed by largely without incident, with Chelsea facing up to the reality of lying 10 points behind early league leaders Arsenal and having just one win in five matches in all competitions.

That was until Gallagher's intervention, which gave his side their first away win since August 6 and saved Potter having to answer some awkward questions.

Gallagher didn't celebrate, he showed a bit of respect, but I don't think I'd have done that, to be honest. Chelsea pay his wages. I don't get that, I really don't understand it. I'm a Chelsea fan, I'd want to run over to the fans.

The sight of the usually imperious Silva left sprawling on the floor is a rare one but that is exactly where he found himself after Ayew pounced on the Chelsea defender's indecision and sought to race towards Kepa's goal.

Perhaps instinctively, Silva thrust out a hand to deflect the ball away from Ayew and halt the hosts' attack, a move that inevitably brought howls from the stands - and Patrick Vieira on the touchline - imploring referee Chris Kavanagh to dismiss the Brazil international.

Instead, Silva was presented with a yellow, but it seemed inevitable the immediate VAR review would bring his afternoon to an early end.

But the upgrade to a red card never came and Silva added insult to Palace's injury by playing a key role in Aubameyang's equaliser a few minutes later.

Potter conceded his team were on the "right side" of what he termed a "50-50" decision by the officials, while Vieira was clearly furious with the decision.

The Palace boss' complaints earned him a yellow card from Kavanagh and he was clearly still angry after the match, yet insisted he did not want to say too much for fear of being punished by the Football Association - a fate that would no doubt add to his already glum mood.

Vieira claimed he just wanted to "move on" when quizzed on the decision not to send off Silva, saying: "Regarding Thiago, it's something I don't want to talk about. 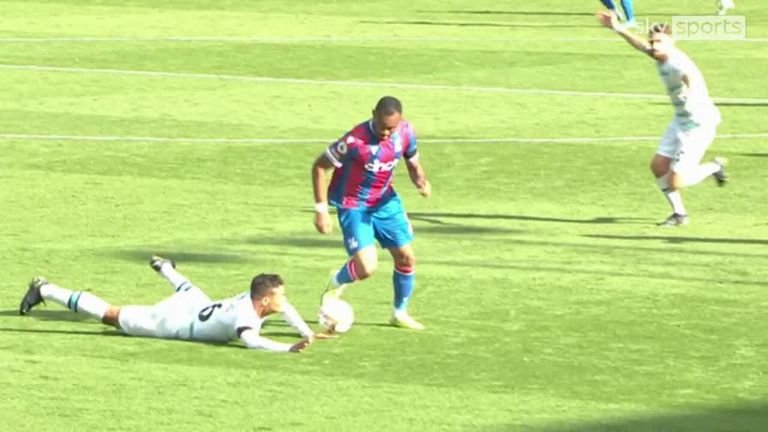 Chelsea's Thiago Silva appeared to deny Crystal Palace a chance to break from the halfway line after he handled the ball but the VAR agreed with referee Chris Kavanagh's original decision of a yellow card.

"It's difficult for me to understand it, to accept it, so it's better sometimes to be really quiet.

"I believe the referee got it wrong and if I say what I think I would be in trouble.

"There's a referee, there's a VAR and they are making decisions. We just move on."

Steve Parish, the Palace chairman, didn't hold back in his thoughts, taking to Twitter to ask "what is the point of VAR?"

Potter admitted he could understand his counterpart's disappointment at the official's decisions, but was keen to focus on a successful afternoon for him and his side following the game.

"With regards to the Thiago incident, it was probably a 50-50 one that we've come out on the right side of," said the Chelsea boss. "The fact that he's quite a way away from the goal has probably helped us a little bit but I can understand Patrick's frustration.

"On a personal level, it's just nice to get the first win under the belt. I'm really pleased for the players because the pattern has been: starting quite well away from home and then conceding and not getting the three points.

"They could have felt sorry for themselves but they didn't - they kept pushing in a tight game. We've edged it but it probably could have gone either way in fairness."

Marc Guehi strengthened his case to be included as one of the centre-backs in Gareth Southgate's World Cup squad with a strong performance against his former club, but Tyrick Mitchell struggled at times with the presence of Kai Havertz and Reece James on his side of the field.

As for James, he dominated his battle with Wilfried Zaha to show why he is one of England's premier right-backs, while Ben Chilwell was solid on his first Premier League start for nearly two months.

Mason Mount and Raheem Sterling caused Palace problems without consistently reaching their best at Selhurst Park, but should both be confident of a place among Southgate's 26.

Ruben Loftus-Cheek got more than 30 minutes against his old side but seems to remain on the periphery of England selection, but Conor Gallagher's match-winning performance will surely have caught Southgate's attention.

Chelsea will look to kickstart their stalling Champions League campaign at home to AC Milan on Wednesday - kick-off at 8pm - before hosting Wolves in the Premier League on Saturday, with kick-off at 3pm.

Crystal Palace's next outing is at home to Leeds on Super Sunday at 2pm - live on Sky Sports.