Report and highlights from the Sky Bet Championship clash between Derby County and Luton Town at Pride Park as the Hatters hit back twice for a point against the Rams in an entertaining affair on Tuesday night. 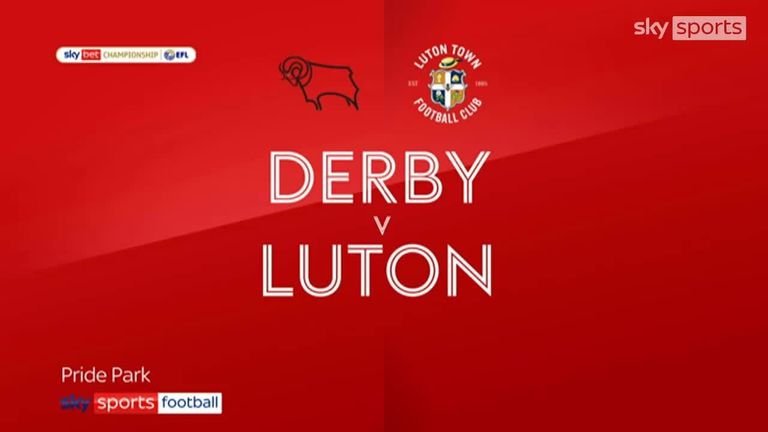 Highlights of the Sky Bet Championship match between Derby and Luton.

Derby stretched their unbeaten run to four games but Luton twice fought back to earn a 2-2 draw at Pride Park.

Tom Lawrence fired Derby ahead before Fred Onyedinma equalised, only for Jason Knight to drive a shot under Simon Sluga and restore the home side's lead.

But Luton had the final word when Elijah Adebayo beat Ryan Allsop to a cross to head home seven minutes from the end.

Derby had kept three consecutive clean sheets but they were opened up in the seventh minute when Adebayo got in on the left only for his low cross to be cleared.

Max Bird hit a low shot from 20 yards that zipped just wide before a mistake by Sonny Bradley led to Derby taking the lead in the 20th minute.

The Luton skipper lost the ball just outside the area to Knight, who set up Lawrence to find the bottom right corner from 15 yards.

Luton responded but wasted two promising openings much to the frustration of manager Nathan Jones, who reacted by making a double substitution on the half-hour.

But it was Derby who went close in the final minute of the first half when a corner bounced up for Kamil Jozwiak whose snap shot went straight at Sluga.

Luton forced a corner in stoppage time but it came to nothing and Derby ended the half without being seriously tested at the back.

That changed three minutes into the second half when a long throw from Harry Cornick was flicked on at the near post and Onyedinma dived to bundle the ball past Ryan Allsop.

Derby responded through Ravel Morrison, who surged forward to play in Knight but he shot over under pressure from Sluga.

Luton replied with a swift counter in the 57th minute and Cornick's low cross reached Adebayo but his shot was deflected into the gloves of Allsop.

Sluga was beaten for a second time in the 60th minute when Lawrence played in Knight, who turned to drive the ball through the Croatian goalkeeper and inside the far post.

Knight struck the ball firmly but Sluga should have done better and he was relieved when a Lawrence drive from distance flashed narrowly wide.

It was Allsop's turn to be questioned in the 83rd minute when he came for a cross but didn't get there and Adebayo headed into the empty net.

Allsop was beaten again three minutes later when Onyedinma lobbed him from a tight angle but the ball came back off the bar to leave both teams reflecting on what might have been.

Derby's Wayne Rooney: "It was a tough one to take. I felt we did enough to win the game, scored two good goals and then we conceded two very sloppy goals which we haven't been doing. We know long throw-ins are difficult to deal with but we've dealt really well with them of late so that was disappointing to concede from that.

"We had a great reaction with a very good goal from Jason Knight but then obviously it's a clear mistake from Ryan Allsop which has cost us three points. We are competing in every game and we know we are a hard team to play against but I'm frustrated tonight with one point."

Luton's Nathan Jones: "The performance levels were nowhere near and we looked energy-less for lots of the first half. We shot ourselves in the foot, we made changes and we started the second half like a house on fire, got the goal but then a bit of a sucker punch again.

"We had to show a load of character and I'm really pleased after two away games and four points against two really difficult sides. Considering we were way off our levels we've come away from a difficult place with a point which shows we have something about us. We should be higher but I think the reason we're not is we probably haven't taken chances when we've been on top."