England have goal disallowed, a penalty saved and a late sending off in dramatic second half

England Women were knocked out of the World Cup after a 2-1 defeat to the USA in a game filled with second-half VAR drama, including a disallowed equaliser and saved penalty.

The USA came racing out of the traps at the Stade de Lyon as Christen Press - who was a surprise replacement for Megan Rapinoe in the starting XI - nodded home inside ten minutes. Ellen White (19) equalised not long after before Alex Morgan (31) put the USA back ahead with another free header.

While there were no goals given in the second half, VAR decisions took centre stage. White had the ball in the back of the net again in the 67th minute, but after a review, it was ruled out for the tightest of offsides.

Following a four-minute VAR review, England were awarded a penalty after Becky Sauerbrunn clipped the heels of White in the area. However, captain Steph Houghton (84) saw her spot-kick saved by Alyssa Naeher, before Millie Bright was sent off two minutes later for a second booking.

In the end, it was a step too far for the Lionesses and they will now compete for a second successive third-place medal while the USA have reached a record fifth Women's World Cup final.

How England went close in Lyon

England looked dazed by the USA's fast start and they had plenty of good early chances. Carly Telford was called into an early save from a thunderous Rose Lavelle effort after she rounded Bright on the right. Not long after, Morgan had a free header from a free-kick but she just nodded over the crossbar.

But the USA did find the net in the tenth minute after some woeful England defending. Kelley O'Hara fired a wonderful ball into the area - with Demi Stokes struggling to mark her - which Press met towards the back post with a free header.

Nine minutes later and out of very little, England got themselves back into the game. Keira Walsh cut out half of the USA team with a sensational midfield pass to Beth Mead over on the left side. Her dangerous cross was then turned home via the crossbar by a flick from White, who has scored six goals in the tournament.

The USA were not to be pegged back for long though and went ahead just after half an hour. England's defending was found wanting again as Lindsey Horan's chipped passed picked out Morgan in the middle, with the striker getting ahead of Stokes to give her a free header, which she duly sent past Telford.

It had been a fairly quiet second half until the 67th minute when the dramatics came thick and fast. After a super Jill Scott flick on from Walsh's throughball, White slotted home past Naeher for what she thought was the equaliser. However, a VAR check was signalled by the referee with the goal eventually ruled out for offside, with White just half a boot out of line.

The striker was involved again 12 minutes later as she went down under pressure from Sauerbraunn inside the six-yard box. On this occasion, it was a lengthy VAR check - around four minutes - but the referee eventually signalled to the spot after it was deemed that the USA defender had made enough contact on White.

Nikita Parris had missed the last two England penalties so captain Houghton bravely stepped up in Lyon, but she dragged her effort to the left as Naeher made the save and deny the Lionesses another equaliser.

Things went from bad to worse for England two minutes later as Bright was given her marching orders. It was two crunching tackles on Morgan - one in the 40th minute and next in the 86th - that saw her receive a red card, although the Brazilian referee Edina Alves Batista appeared to forget that she had already booked Bright, with the defender having to remind her before heading down the tunnel.

From then, it was a deflated run towards full-time and despite a rousing second-half performance, England could not find a way past the world champions, who will defend their title in Saturday's final.

White the star for England

Going for the Golden Boot in this tournament with five goals going into it, White made it six with an instinctive finish and might have had more. Firstly, she converted a left-footed chance that was disallowed for offside and then got caught when about to pass the ball into the net for an equaliser late on, winning a penalty for England. A superb tournament.

Phil Neville says his England Women side are knocking on door of World Cup finals, but still have a way to go to match the best.

Sky Sports News reporter Geraint Hughes in Lyon: "It's like deja vu. It was Russia last year for the men and now here in Lyon for the England Women. It's going to be one of those games where you look back and say you did yourselves proud but perhaps it was also a missed opportunity.

"You get a penalty and captain fantastic Steph Houghton, who is so widely respected throughout the game, and by her standards, it's not the greatest penalty. 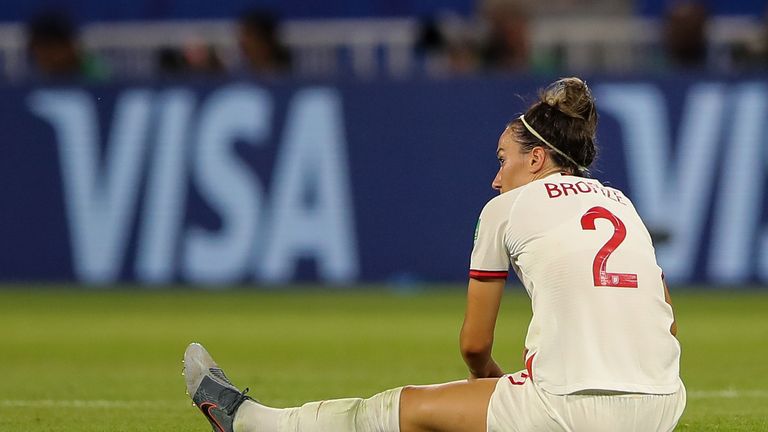 "The question now is how they build on this. How do England get to a final? How do they progress? How do they get the better of USA? Let's put it this way, USA have had their toughest game of the World Cup finals. They all talked about the France game but that is toughest game USA have had, possible the hardest game they've ever had at a World Cup."

USA have won their last 11 matches at the Women's World Cup; the best winning streak in the tournament's history.

England forward Ellen White has scored six goals at the 2019 Women's World Cup; no England player has scored more goals than her in a single FIFA World Cup finals tournament (Harry Kane - 6 in 2018 and Gary Lineker - 6 in 1986).

The USA will now face either the Netherlands or Sweden in Sunday's final in Lyon. England will face the loser of that semi-final in a third-place play-off on Saturday in Nice.