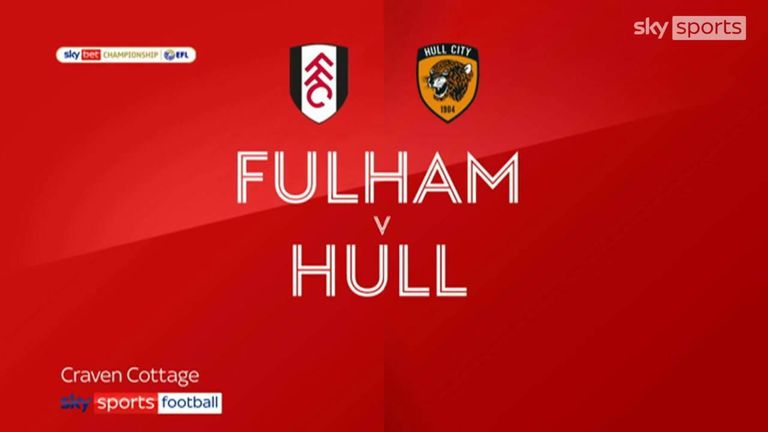 Fulham further cemented their credentials as favourites to return straight back to the Premier League with a comprehensive 2-0 win against Hull.

First-half goals by Aleksandar Mitrovic and Fabio Carvalho at Craven Cottage made it three straight wins and 10 points from four Championship games.

However, the hosts were forced into two first-half substitutions as Tim Ream and Kenny Tete limped off while they suffered a further blow late on when Carvalho needed to be replaced.

The visitors made one change from their midweek defeat at home to Derby, with Manchester United loanee Di'Shon Bernard making his first league start by replacing the injured Alfie Jones.

Fulham had the first effort after four minutes when Josh Onomah volleyed a loose ball from the edge of the area, but he could not direct his effort on target.

Hull's Greg Docherty found space against a defence backing off him after eight minutes and his drive from outside the box was palmed away by Paulo Gazzaniga.

Fulham were forced into their first change after 21 minutes after Ream fell awkwardly and was replaced by Alfie Mawson.

However, the hosts took the lead a minute later when Mitrovic flicked home a corner from Jean Michael Seri.

Another enforced change for Fulham was needed after 32 minutes, when Bobby Decordova-Reid replaced the limping Tete.

Like the previous substitution, the change was soon followed by a goal for the hosts.

A low cross by Antonee Robinson from the left two minutes later was picked up by Carvalho and he netted his second goal in two games by keeping his footing to slot past Matt Ingram.

The hosts looked rampant and came close to a third with efforts from Mitrovic, Ivan Cavaleiro and Tosin Adarabioyo.

After a disappointing first half, Hull showed more attacking intent after the restart. However, a wayward effort from Keane Lewis-Potter was their main effort on goal.

Mitrovic had the perfect opportunity to seal all three points after 56 minutes but he directed his header from a Robinson cross wide.

Seri tested Ingram again from range just after the hour mark, but the goalkeeper was able to turn his effort away.

Fulham were hit with another injury blow with 20 minutes left when goalscorer Carvalho was taken off, with Frank Anguissa his replacement.

The home side were not content with a two-goal cushion and continued to press for a third.

But despite forcing back Hull with a number of corners in the last 10 minutes, Fulham were unable to find the third goal their all-round play deserved.

Fulham's Marco Silva: "I'm happy with the three points, because we asked our players before the game to aim for the target of the third win in a row, with the first home win as well. If you achieve that, I'm happy. It wasn't the best performance to be honest with you. In this competition, with the level that you are, it was not the perfect performance that we had against Millwall.

"We have to play to win football matches. Today, we won the game because we were the best team on the pitch. After our first goal we saw confidence and controlled the game better, in the way we wanted. Antonee Robinson is in our model, in our way to play. It was his best performance this season."

Hull's Grant McCann: "Their first goal I'm really disappointed with. Having watched it back it's a block on Jacob. It's disappointing because it's right in front of the referee. Fulham are a possession-based team, we have to stay compact and in shape. I think we did that in the second half.

"I was proud of the boys after the break, the way we stuck at it. I thought we started the game very well, they came down from the Premier League last season. We showed bravery, I asked for that and we showed it in the first half. We got forward in some good areas."