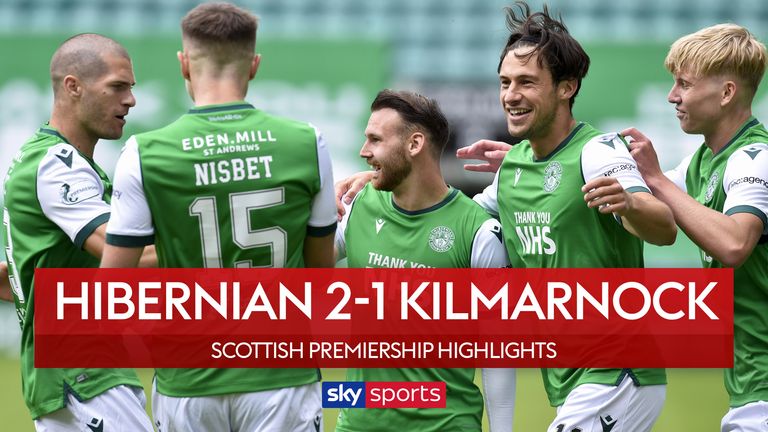 Highlights of the Scottish Premiership match between Hibernian and Kilmarnock.

Australia international Boyle bagged a brace in an entertaining curtain-raiser in the capital, with his opener aided by Eastwood's error of judgement.

Boyle rippled the net again prior to the break before a Chris Burke wonder goal gave Alex Dyer's men hope.

Eastwood, who only arrived on loan from Sheffield United on Thursday, was then withdrawn at the break and replaced by fellow recent arrival Danny Rogers.

And while Rogers claimed a personal shut-out, Killie were unable to rescue a point in the second period.

However, the inclusion of 18-year-old Josh Doig was the major shock in his starting line-up, with the teenager rewarded for a string of fine displays during pre-season.

Aaron Tshibola, meanwhile, was the only other summer signing in the Killie starting line-up, along with Eastwood.

Both sides took a knee prior to kick-off in support of the Black Lives Matter movement - before the action started against a backdrop of piped-in crowd noise.

Nisbet slipped a through ball to Boyle and the speedy striker rounded the on-rushing Eastwood, who was never going to win that foot race, before coolly slotting home.

The hosts were in control and deservedly doubled their lead when Boyle collected a Scott Allan pass before haring into the box and finding the bottom corner with a clinical low drive.

Killie were handed a lifeline in the most spectacular fashion when Burke unleashed a blockbuster free-kick from 30 yards which whistled past Ofir Marciano to halve the arrears.

Rogers replaced Eastwood at the break - but it was Marciano at the other end who caught the eye.

The Israel international pulled off a magnificent low save to keep Hibs' lead intact after the break, reacting superbly when Paul Hanlon directed a Greg Kiltie cross towards the corner of his own net.

The Ayrshire outfit threw bodies forward in the closing stages in search of parity but a Danny Whitehall header which cleared the crossbar was as close as they came.

Hibernian manager Jack Ross: "Martin hasn't felt like he's been at his best in pre-season, but he assured us that he'd be right for the opening day. In fact, he told us he would score!

"He played in a slightly different role at the start of the game [as a striker] and then back to his more natural position on the wing - but wherever he plays on the pitch, he carries a threat because of that pace.

"And he's a much better player than a lot of people give him credit for. His all-round play is good, how he creates opportunities is excellent and I'm delighted he has got off to that start."

Kilmarnock manager Alex Dyer: "I was disappointed with the manner of the two goals we lost. The first one was a complete rush of blood from the young goalkeeper [Eastwood]. It was a mistake but he is a good 'keeper and he will learn.

"That was not the reason I took him off at half-time. He had a problem with his quad and we will have to get it assessed. If he had been fully fit then he would have stayed on the pitch."

Hibernian will play away to Livingston next Saturday (kick off 3pm) while on Sunday, Kilmarnock will host Scottish Premiership champions Celtic, live on Sky Sports (kick off 4.30pm)