Inter Milan completed a stunning second-half fightback and claimed top spot in Serie A with a 4-2 triumph over AC Milan.

AC Milan dominated the first half at the San Siro, with goals from Ante Rebic (40), and Zlatan Ibrahimovic on the stroke of half-time giving them a deserved double lead at the break.

But Marcelo Brozovic and Matias Vecino struck twice in as many minutes early in the second half to bring the hosts level in a breathless Milan derby.

Stefan De Vrij completed the turnaround on 70 minutes when his diving header from a corner looped into the far corner to make it 3-2 to Antonio Conte's side.

Ibrahimovic came agonisingly close to making it 3-3 when his last-minute header struck the post, and Romelu Lukaku capped off a stunning second-half fightback with a header from a Victor Moses cross in the dying seconds.

Inter claim top spot in Serie A moving level on points with Juventus and one ahead of Lazio.

AC Milan started off dominating from the early stages as Hakan Calhanoglu almost broke the deadlock inside the opening 10 minutes with a low drive from distance which smacked off the far post.

Inter looked second best throughout the first half, but went close twice with Diego Godin heading a corner inches wide and Vecino firing a tame first-time effort straight at Gianluigi Donnarumma from inside the area.

The visitors made the pressure count five minutes from the break when Ibrahimovic rose over Godin to nod down a cross into the path of Rebic, who anticipated Padelli to prod the ball into an empty net.

Ibrahimovic doubled Milan's lead on the stroke of half-time when Calhanoglu's corner was knocked on by Franck Kessie and Daniele Padelli could not keep out the Swede's headed effort.

Inter came racing out the blocks in the second half and halved the deficit when Brozovic's sweet volley from outside the box beat Donnarumma to give the hosts a lifeline.

Two minutes later, Alexis Sanchez was teed up inside the box in front of Donnarumma, and the Chilean's cut-back found Vecino who tapped in to make it 2-2.

Conte's side took the lead when De Vrij then met an outswinging corner at the near post and sent a diving header up and over Donnarumma and in.

Former Spurs man Christian Eriksen entered the fray in the final 15 minutes and almost sent San Siro into raptures when his 35-yard free kick crashed off the upright.

AC Milan went all-in in the final minutes to find an equaliser, clinging on to their talisman Ibrahimovic, and the Swede came inches close to a last-minute equaliser with a header from close range that struck the post.

Eventually, it proved vital as Lukaku completed the comeback when he connected with a Moses cross and sent a towering header in the net to claim a priceless three points. 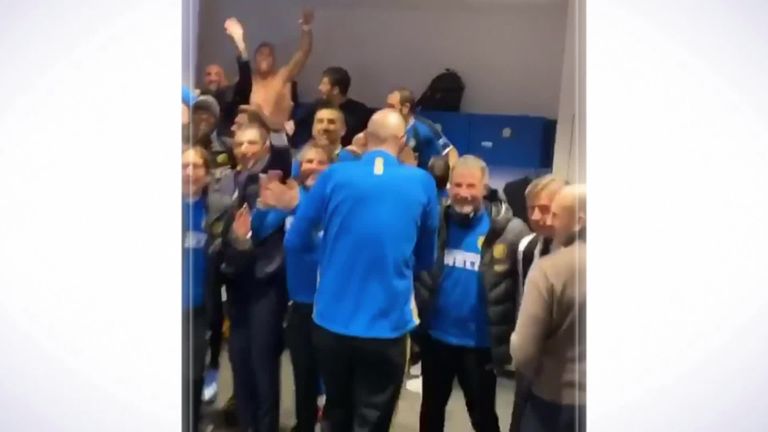 Inter Milan striker Romelu Lukaku posted footage of himself and his teammates celebrating in the changing room after their 4-2 comeback win over AC Milan. Instagram: @romelulukaku

Inter host Napoli in the first leg of the Coppa Italia semi-finals on Wednesday before travelling to Lazio for a top-of-the-table clash in Serie A on Sunday.

AC Milan will also take part in the domestic cup as they welcome Juventus at the San Siro on Thursday night. They then host Torino in their next Serie A game the following Monday.