Match report as USA book last-16 clash with Netherlands on Saturday; Christian Pulisic netted the winner but suffered an injury and was taken off at the break; England win Group B after beating Wales 3-0

USA qualified for the World Cup knockout stages as Christian Pulisic netted the only goal in a 1-0 win over Iran before the Chelsea winger was taken to hospital injured.

In what was a shootout for qualification, it was the USA that relished the jeopardy, playing with great energy and attacking intent as Pulisic bundled home the crucial goal on 38 minutes.

The Chelsea man suffered an injury to his hip in that brave action and did not come out for the second half, with the US national team later confirming he had been taken to hospital with a 'pelvic contusion'.

Coach Gregg Berhalter said: "He was feeling some dizziness, it was a blow to his abdomen. We FaceTimed him from the hospital and he was in good spirits."

"I sent him a text and checked on him and he said, 'Best believe I'll be ready on Saturday'," ESPN also quoted his team-mate Weston McKennie as saying.

USA missed his influence as the game wore on but, despite enjoying plenty of territory, Iran could not find the quality to find an equaliser that would have been enough to send them through.

USA will now play Netherlands on Saturday at 3pm in the first last-16 game after Louis van Gaal's side secured their spot as Group A winners with victory over hosts Qatar.

Man of the match: Sergino Dest

The onus was on USA to make the running as they knew nothing but a win would be good enough for qualification. Sergino Dest and Antonee Robinson were playing like wingers rather than full-backs and their intensity out wide set the tone for a barnstorming first half from USA.

Timothy Weah was the main beneficiary of the vibrant USA attacks but his composure was lacking at key moments, firstly looping a rushed header from 12 yards straight at Alireza Beiranvand before rushing a finish moments later after some superb play from the lively Josh Sargent.

It seemed only a matter of time before the opening goal landed and Pulisic delivered for his country.

Weston McKennie sprayed a pass out to Dest, who nodded down for Pulisic in the six-yard box. He did enough to force the ball home but he collided with Beiranvand in the process and was replaced at the break with a problem to his hip area.

Iran had to go for it after the break and Saman Ghoddos set their intent by driving into the back post from a right-wing cross but headed over the bar.

Despite lots of possession, Iran struggled to test USA goalkeeper Matt Turner. The best chance fell to Morteza Pouraliganji, who headed a free-kick agonisingly wide of the post.

Desperation started to kick in during the final moments and Mehdi Taremi was adamant he was fouled by Cameron Carter-Vickers but the referee waved away the protests.

As the final whistle sounded, the Iran players fell to their knees. This was USA's day.

Player of the match - Sergino Dest

Was this Dest rampaging down the right flank? Or Cafu? It was hard to tell at times. The full-back was absolutely key in the way USA pinned Iran back, especially in the first half. It was his header across goal that provided Pulisic with the opening goal. The 22-year-old has yet to really kick on with his career at Barcelona, and is currently out on loan at AC Milan, but his raw talent is undeniable.

Berhalter: USA did well not to buckle under pressure

USA manager Gregg Berhalter praises his team for not buckling under pressure of drawing with Iran, a result which would have lead to the USA being knocked out of the group stages of the World Cup: 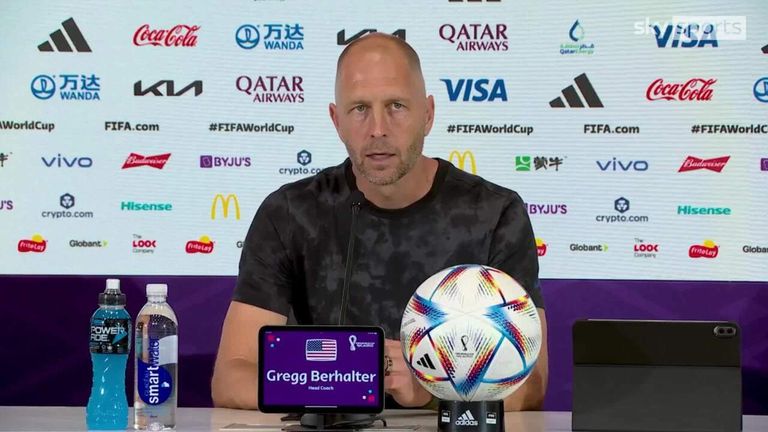 Gregg Berhalter praises his team for not buckling under pressure of drawing with Iran, a result which would have lead to the USA being knocked out of the group stages of the World Cup

Write off the USA at your peril

On the evidence of the group stage, pre-World Cup reports of the US' demise appear to have been greatly exaggerated and one thing is for sure - the Netherlands had better not underestimate Gregg Berhalter's side in their last-16 clash on Saturday.

The US deservedly overcame Iran in their final Group B clash thanks to a second successive World Cup clean sheet and Christian Pulisic's close-range finish, although the Chelsea forward was injured in the process of scoring and worryingly ahead of the weekend showdown, had to be substituted at half-time.

But make no mistake about it, this is a well-drilled outfit, with pace in attack, out wide and in the centre of the park and no shortage of technique to go with that as seen in the impressive displays so far in Qatar from the likes of captain Tyler Adams, Sergino Dest, Yunus Musah, Weston McKennie, Pulisic and Timothy Weah.

But while the Oranje are undoubtedly a step up in class from facing Wales and Iran, the US have already shown in holding England to a goalless draw that they are more than capable of mixing it with the so-called Big Boys of international football.

So do not be surprised were the US to make life very uncomfortable for Louis van Gaal and Co at the Khalifa International Stadium this weekend, much as they did to much-fancied Belgium the last time they made it through to the World Cup knockouts in 2014.

It's a knockout for the USA - Opta stats