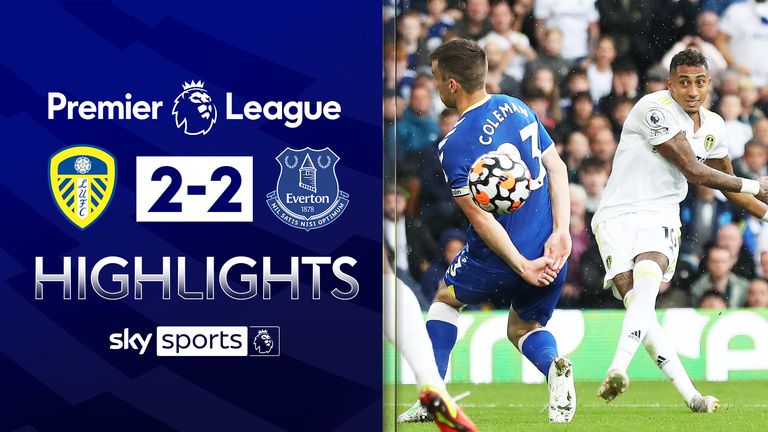 FREE TO WATCH: Highlights from Leeds United's draw against Everton in the Premier League.

Leeds United claimed their first Premier League point of the season, twice coming from behind to draw 2-2 with Everton on an historic afternoon at Elland Road.

Seventeen years on from their last home Premier League game with a capacity crowd, Leeds welcomed supporters back through the gates of Elland Road - and the fixture delivered drama to match the fevered atmosphere.

Dominic Calvert-Lewin rifled Everton into the lead on 26 minutes from the penalty spot after Liam Cooper was penalised by VAR for a shirt pull, but Leeds roared back before half-time through Mateusz Klich's brilliantly-worked team goal.

Demarai Gray scored his first goal back in the Premier League to restore Everton's lead early in the second half, but Raphinha's stunning strike hauled Leeds level for a second time.

Everton nearly snatched all three points at the death when Abdoulaye Doucoure's shot deflected inches wide off Leeds captain Cooper, but both sides had to settle for a point which lifts Everton up to second in the table and Leeds to 14th.

Man of the Match: Demarai Gray

The atmosphere inside Elland Road, which was awash with yellow and blue flags, was electric as fans returned to the stadium for the first time in 17 months. The last time the stadium was full, Leeds were in the Championship.

They are now into their second season back in the Premier League and after their opening weekend defeat to Manchester United, Marcelo Bielsa went with a three-man defence, which caught Everton off guard.

Leeds dominated possession early on, but they could only muster a wayward Raphinha shot as they tried to seize control of the game.

Everton steadily grew into the contest but were given shortchange from the Leeds defence, with Pascal Struijk throwing his body in the way of Richarlison's shot. When Everton did bypass the Leeds defence they were let down by their finishing, with Calvert-Lewin unable to stretch far enough to convert the lively Demarai Gray's teasing cross.

But having defended so stoutly beforehand, Leeds gifted Everton the opportunity to take the lead when captain Liam Cooper blatantly tugged Calvert-Lewin's shirt in the area, preventing him from reaching Lucas Digne's cross.

The incident was initially missed by referee Darren England but, after being instructed to consult the pitchside monitor by VAR, he awarded the penalty, and Calvert-Lewin made no mistake with a clinical shot past Illan Meslier.

Everton's lead would last just 15 minutes as Patrick Bamford benefited from a defensive lapse from defender Michael Keane and released Klich through on goal, where he showed great composure to sit Jordan Pickford down and finish into the corner, sparking scenes of sheer jubilation from the Leeds faithful.

The pendulum swung firmly back in Everton's favour within five minutes of the restart when Gray capped a fine individual performance and restored the Toffees' lead with a clinical low effort into the far corner.

The platform was there for Everton to push on to secure back-to-back Premier League victories, but Calvert-Lewin was twice denied a third by two inspired, crucial saves from goalkeeper Meslier.

And Everton were made to rue their missed chances 18 minutes from time when Cooper rolled the ball into the path of Raphinha, who lashed an unstoppable effort past Pickford into the Everton net.

Everton thought they had snatched all three points two minutes from time when Doucoure's tame shot took a huge deflection off Cooper and trickled inches past the Leeds post. And, in a dramatic final passage of play, Mina's brilliant defensive header denied Bamford a stoppage-time winner as the spoils were shared. 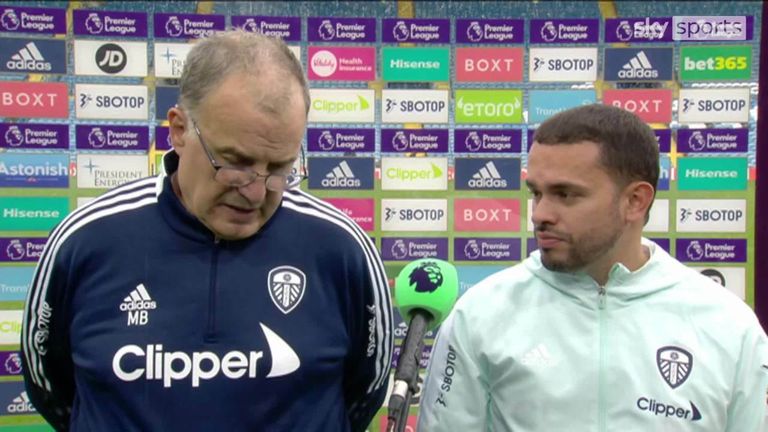 Leeds head coach Marcelo Bielsa: "We had a dominance of the game but with that superiority with the management of the ball we should have created more chances on goal and suffered fewer chances on our goal. Our goalkeeper made two interventions that we valued as a goal in our favour today and allowed us to get the draw.

"The public is always a stimulus and the presence of the spectators is very important. It made us very happy, and it was very emotional to play in front of them again." 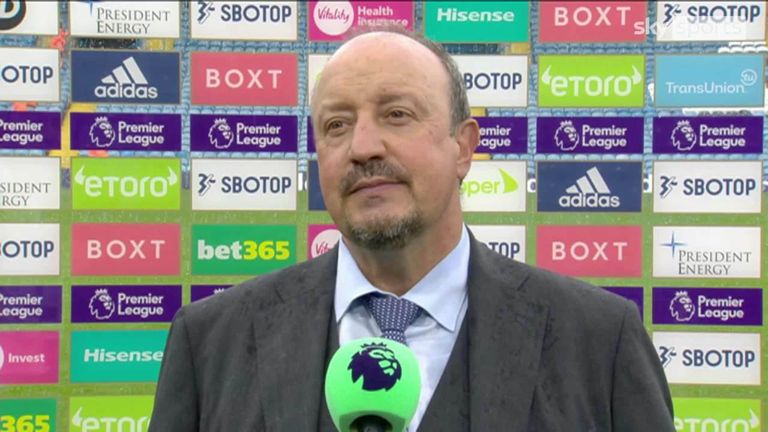 Rafa Benitez praised his players after another encouraging performance at Leeds preserving his unbeaten start as Everton manager.

Everton manager Rafa Benitez: "I'm really happy with the way we managed the game against a team playing at home with their fans back for the first time in a long time. The reaction was very good, we were under pressure but we had good chances and little by little we got stronger and stronger.

"If Dominic had scored the third goal, we could have been talking about a different result. But we are growing, I can see that we are growing, and if you grow while taking points that is a good thing."

Man of the Match - Demarai Gray

Demarai Gray scored his first Premier League goal for Everton, becoming the 34th different player to score both for and against the Toffees in the competition.

Only West Ham (46), Aston Villa (42) and Liverpool (39) have had more players score for and against them in the competition.

Leeds host Crewe and Everton travel to Huddersfield in the second round of the Carabao Cup on Tuesday at 7.45pm. Leeds then travel to Burnley in the Premier League on Super Sunday at 2pm - live on Sky Sports Premier League - while Everton head to Brighton on Saturday at 3pm.