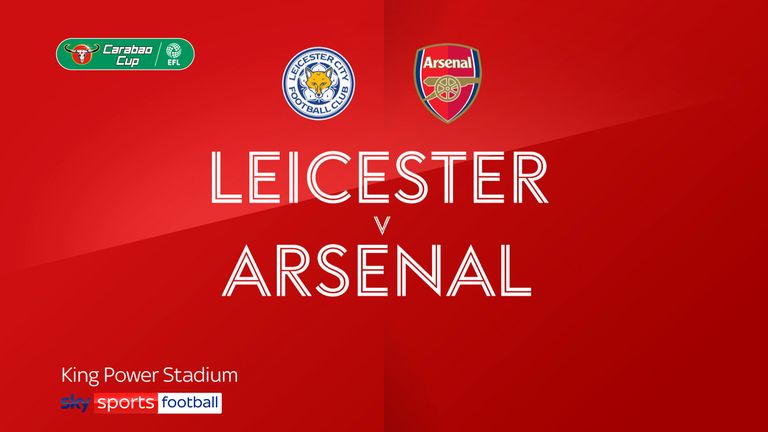 Highlights from the Carabao Cup third round as Arsenal faced Leicester

Arsenal are through to the fourth round of the Carabao Cup after a 2-0 win over Leicester at the King Power Stadium.

Christian Fuchs' second-half own goal gave the Gunners the lead and Eddie Nketiah bundled home in stoppage time to add gloss to the victory for a Mikel Arteta's side that once again did not include Mesut Ozil.

The result maintains their strong start to the season and secures a possible trip to Anfield to face Liverpool if the Premier League champions can beat Lincoln City on Thursday.

How Arsenal won it

Brendan Rodgers made 11 changes to the team that beat Burnley but his side still started brightly with Marc Albrighton doing brilliantly to carve out the game's first chance.

Bernd Leno, preferred to new arrival Alex Runarsson, came off his line to save well from Kelechi Iheanacho at point-blank range after the Nigerian had been put clean through.

Arsenal were soon into their stride, however, and created a string of openings at the other end with Reiss Nelson, looking to impress Arteta, firing off a series of long-range efforts.

Nelson should have done better on the half-hour mark when his shot drifted wide of the post, while Arsenal also wanted a penalty just before that when Bukayo Saka went down.

Saka, playing on the left, was the stand-out player and Arteta was screaming for the referee to point to the spot only for him to see nothing wrong with Daniel Amartey's pressure.

The decision looked likely to prove costly for Arsenal when James Maddison, making his first start since June, curled a delightful shot beyond Leno only to see it cannon back off the post.

Maddison wasted a more inviting chance in the early stages of the second half, blazing over after being fed nicely by the spritely Demarai Gray, and Arsenal made them pay soon after.

Nicolas Pepe broke with purpose down the right and though Danny Ward palmed back the winger's cross, Pepe's follow-up shot came back off the post and was diverted into his own net by Fuchs.

Brendan Rodgers made 11 changes to the Leicester team that beat Burnley at the weekend. James Maddison returned to the starting line-up for his first start since June, while young midfielder Kiernan Dewsbury-Hall made his first start in a Leicester shirt.

There were seven changes for Mikel Arteta from the team that beat West Ham with Bernd Leno, Rob Holding, Bukayo Saka and Sead Kolasinac keeping their place. Alex Runarsson and William Saliba were on the bench but there was no place in the squad for Mesut Ozil.

Arsenal came close to doubling their lead when Nketiah lobbed the ball over Ward only for the backtracking Leicester captain Wes Morgan to clear the ball off the line.

Rodgers introduced Ayoze Perez in the hope of salvaging the tie and the ploy nearly worked when he had a clear header from Albrighton's free-kick. Instead, he put it wide of the post.

That was to be Leicester's final chance of the match, their hopes ending when sub Hector Bellerin skipped past a couple of challenges and crossed for Nketiah to force the ball home from close range in stoppage time.

Last season's semi-finalists depart the competition. Arsenal's hopes of yet another trip to Wembley go on.

Arteta on Ozil and why the World Cup winner had fallen out of favour: "The team is evolving, you can see the level they are achieving. This is where we are at the moment. We want to evolve more and play better and compete better. We need to keep maintaining that.

"I'm really happy with the performance here, how difficult they're making things for the coaching staff to select the squad. We are picking the players that we believe are the best for each game. You can see we keep training, it's what we're trying to do. You can see that the players we are changing, we are using, it's very difficult every week not for Mesut but for some other players as well to make the squad. Every week we try to pick the right players.

"Of course I understand and I respect your questions but I have to try to do my job as fair as possible. I try to select the players that are, in my opinion, in better condition."

Brendan Rodgers: "If you are going to lose a game that is how I would want to lose a game. There was lots of energy, lots of quality, and even though players were lacking minutes, there was cohesion. There were many positives. The disappointment is that they were two scruffy goals that we lost to."

Man of the match - Bukayo Saka

Operating as left wing-back, Saka produced an eye-catching performance, threatening the Leicester defence with his raids. The youngster was unfortunate not to be awarded a penalty when bundled to the ground by Amartey but he will settle with the win - and another display that enhanced his growing reputation at Arsenal and beyond.

After another impressive win for his young side, Arteta did not want to be answering questions about his decision to omit Ozil from the squad but there was no avoiding the topic of the German in the post-match press conference.

"The team is evolving and you can see the level they are achieving so this is where we are at the moment," said Arteta when asked about Ozil. "We want to evolve more and to play better and to compete better. We are picking the players that we think are best for each game."

With the playmaker now in the final year of his contract, it was put to Arteta that it is difficult to envisage Ozil playing another game for the club given that he has been left out of every squad so far this season.

"It is difficult for others as well who did not play in the Premier League and did not play tonight either," he replied. "We have a squad of 26 or 27 players at the minute and we cannot give game time to all of them."

Asked whether he understood that supporters are curious about the situation, Arteta added: "Of course, I understand and respect the question, guys, but I try to do my job as fair as possible."

The next round of Premier League fixtures could hardly be more daunting for these two teams. Leicester travel to face Manchester City on Sunday, while Arsenal have an extra day of rest before taking on Premier League champions Liverpool at Anfield on Monday evening. Both matches are live on Sky Sports.