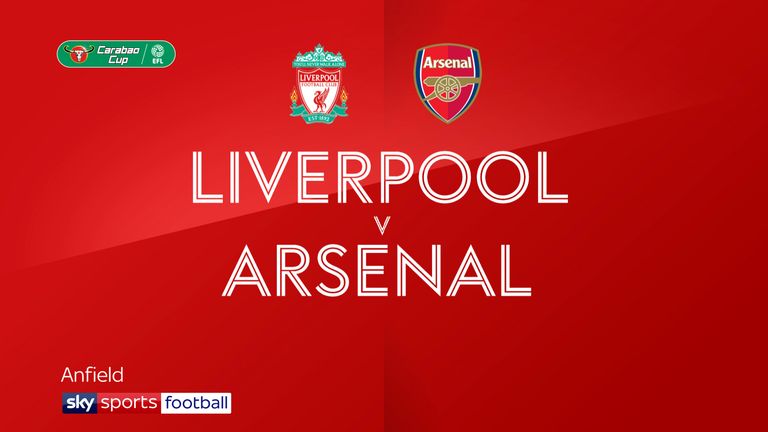 Highlights of the Carabao Cup last-16 match between Liverpool and Arsenal.

Curtis Jones' spot-kick sealed Liverpool's place in the Carabao Cup quarter-finals as Arsenal were beaten on penalties after a breathless 5-5 draw at Anfield.

Divock Origi sent the game to spot-kicks with a 94th-minute equaliser as Arsenal again surrendered a two-goal lead and Liverpool demonstrated their powers of recovery in a contest that will live long in the memory.

James Milner reduced the deficit from the spot before the interval (43), but it was his slack pass that allowed Ainsley Maitland-Niles to re-establish Arsenal's two-goal lead (54) from close range.

Liverpool then scored twice in four minutes to stage a brilliant comeback as Alex Oxlade-Chamberlain's thunderous finish (58) was added to by Origi's rifled strike from the edge of the box (62).

Arsenal thought they had booked their place in the quarter-finals when Joe Willock found the top corner with a strike worthy of deciding any contest - but Origi sent the game to penalties in stoppage time with a trademark finish from Neco Williams' cross.

Both sides scored their opening three penalties in the shootout before Arsenal substitute Dani Ceballos saw his effort kept out by Caoimhin Kelleher, and after Origi had once more held his nerve to preserve the advantage, Jones showed immense composure to send his side into the last eight.

Man of the match: Mesut Ozil.

How Liverpool came back from the dead

Four of the previous six Premier League title winners have lifted the EFL Cup in the same year - but despite Jurgen Klopp's priorities appearing to lie elsewhere from the wholesale changes he made to his starting line-up, the Reds got off to the perfect start.

Arsenal - who made 11 changes of their own - had conceded 18 goals in their previous five visits to Anfield. There have been one or two horror shows down the years and on the night before Halloween, their resolve this time lasted just six minutes as Liverpool were gifted the lead.

The 18-year-old Williams, making his first-team debut, found Oxlade-Chamberlain in acres of space down the right and the midfielder's low cross was diverted into his own net by Mustafi at the near post.

Oxlade-Chamberlain could have added to the two goals he scored in Liverpool's 4-1 win over Genk in the Champions League last week but he was unable to take Adam Lallana's cute pass in his stride - and the hosts were pegged back following Arsenal's first meaningful attack.

Mesut Ozil was one of 11 changes to the Arsenal team with Lucas Torreira, Sead Kolasinac and Ainsley Maitland-Niles all recalled.

Torreira scored a consolation goal during the Gunners' 3-1 defeat on Merseyside in August, and the Uruguayan was on hand to tap home from close range after Kelleher had kept out Bukayo Saka's shot from Mesut Ozil's pull-back. Replays showed that Torreira was fractionally offside, but with no VAR in use, the goal stood.

Arsenal completed the turnaround just seven minutes later as Liverpool switched off at a free kick. Torreira worked the ball out wide to Maitland-Niles, and after he beat Origi with ease down the right, his cross was diverted towards his own goal by Sepp van den Berg. Kelleher did well to keep the ball out but Martinelli was on hand to crash home the rebound.

Anfield was silenced, but things got worse for the hosts 10 minutes later as Harvey Elliott's slack pass inside was pounced on by the instrumental Ozil, who laid the ball first time into the path of Saka. Martinelli was unmarked and lifted the low cross beyond Kelleher for his seventh goal of the season.

It was the first time since an FA Cup defeat to West Brom in January 2018 that Liverpool had conceded three goals in the first half of any game at home - but Klopp's men were handed a route back into the game on the stroke of half-time as Martinelli's trip on Elliott inside the box allowed Milner to convert from the spot.

Jamie Carragher called for Liverpool's senior players to "step up" at the interval - naming Oxlade-Chamberlain and Origi as those who bore the brunt of his criticism - but it was another experienced player who allowed Arsenal to regain their two-goal lead nine minutes into the restart.

Milner's slack back-pass to Kelleher was cut out by the alert Maitland-Niles, and after his touch took the ball wide of goal, Ozil produced an exquisite backheel to his team-mate for a simple finish as the German celebrated with his adoring fans.

Arsenal were now in pole position - as they were against Crystal Palace at the weekend - but they were dramatically pegged back by two goals in the space of four minutes. First, Oxlade-Chamberlain ghosted in behind Maitland-Niles to collect Lallana's knockdown and rifle in a spectacular strike from 25 yards that flew past Emiliano Martinez.

Unai Emery was still issuing instructions to his shell-shocked players when Origi provided a timely reminder of his knack of scoring important goals as he collected Jones' probing pass to cut inside Rob Holding and fire his shot into the top corner via the outstretched Martinez.

Martinelli fluffed a chance at sealing his hat-trick as he failed to connect with Hector Bellerin's cross, but as this breathless contest moved into the final 20 minutes, Willock embarked on a weaving run to find the top corner with a sublime finish from 20 yards out.

But with Origi still on the field, a sting in the tale felt inevitable as Williams' perseverance was rewarded with his cross hooked home instinctively by the Belgian. In a match that defied logic, Ceballos was the fall-guy as the Spaniard's spot-kick was kept out by Kelleher, allowing Jones to repay Klopp's faith in youth.

How Liverpool won 5-4 on penalties

Liverpool boss Jurgen Klopp: "We had to encourage them to keep going. With the team we had tonight to have 65 per cent possession is crazy.

"The mistake we made was that we were too open. We were tuned to each other and are not used to playing with each other. It's not too smart but it can happen. But on the other side, we had to go again and stay brave."

Arsenal boss Unai Emery: "It was a crazy match. I'm very proud of the players' work. With our work we deserved something more and I am going to take the positives.

"To concede five goals defensively, you cannot be happy for that. But giving the supporters such an amazing match is very good, even if the result is not the best."

Man of the match - Mesut Ozil

Ozil made only his third appearance of the season - and his first since September 24 - after being named in Arsenal's team.

The former Germany international has not featured in a matchday squad since his outing in the last round against Nottingham Forest. But here was a reminder of the qualities he possesses.

Alan Smith said in commentary: "When you see Ozil in this kind of form, it does make Emery's decision to leave him out look like a strange one. He is making the team tick and has shown fantastic vision."

The German was replaced after 65 minutes, another head-scratcher for the travelling fans. In a chaotic game full of individual errors, Ozil's class shone through.

Analysis: Ozil has to be in Arsenal team

"I'm not Ozil's biggest fa, but you cannot tell me he is not good enough to get into this Arsenal team as this isn't a great Arsenal side.

"The criticism with Ozil is whether he can take them to the Premier League title or the Champions League, but at the moment Arsenal are going for the top four. So he's got to be in the team or best XI.

"No one is doing anything consistent for Arsenal at the moment, not just Ozil. If you look at the front three, I am sure they would love to have Ozil feeding them. Arsenal are in a position where so many players are not at the top of their game that they almost have to put up with what Ozil doesn't do."

Liverpool travel to face Aston Villa in the Premier League on Saturday; kick-off is at 3pm. Arsenal host Wolves at the same time at the Emirates Stadium.