Sadio Mane scored his 100th Liverpool goal in a 3-0 win over Crystal Palace which sent Jurgen Klopp's side three points clear at the Premier League summit.

Mane pounced on the rebound from Mohamed Salah's header from a corner to reach his century for the club (43), while also becoming the first player in Premier League history to score in nine consecutive games against a single opposition.

"I am really happy for him he could reach it, a massive achievement in the glorious history of this club that only 18 players scored 100 goals," Klopp said after full-time.

Both sides had come close to opening the scoring before Mane's opener in a topsy-turvy opening at Anfield. Alisson turned Wilfried Zaha's goalbound effort onto the post with less than two minutes gone, while Diogo Jota blazed over horrendously from four yards shortly before Mane's goal.

Salah struck from another corner after losing Jairo Riedewald 12 minutes from time, and a stunning Naby Keita volley, from yet another, sealed victory late on (89).

Jurgen Klopp summed up Liverpool's tricky afternoon after full-time by labelling the performance "one of the most hard-fought 3-0s" he had ever seen, with the result at Anfield telling far from the full story.

Liverpool have found Crystal Palace tricky customers in the past - before their most recent four straight home wins at Anfield - and must have wondered if a return to form was on the cards as Alisson turned Zaha's lob onto the post inside the opening two minutes.

Palace's tempo was soon matched by a Liverpool side that had scored 12 goals in their previous five matches this season, with Jota shooting over from a tight angle.

He would wish that was his worst miss of the half, because, as the hosts took control towards the end of the opening period, the forward blazed well over from four yards out when left with the goal at his mercy after Vicente Guaita palmed Thiago's header straight at him.

There was probably no one happier than Jota when Mane made amends two minutes before half-time to score his 100th Liverpool goal, making no mistake from a similar distance to bury the rebound from Salah's header.

The hosts finally got a hold on Palace for a period after half-time, until the introduction of Edouard produced a spark in the visitors' performance for the second weekend in a row.

He took only 20 seconds to open his account against Tottenham last Saturday, and seven minutes into his cameo this time he should have levelled. Martin Kelly's cross found him in between James Milner and Ibrahima Konate, and, with the goal gaping, his heavy touch allowed Alisson time to steal in and clear.

Liverpool had no finishing problems of their own as Riedewald allowed Salah a clear run from another corner to powerfully fire beyond Guaita from six yards.

There was still time for a hat-trick of goals from corners, as Keita fired in the pick of the bunch with a spectacular 20-yard volley from a Guaita punch in the final minute of normal time. 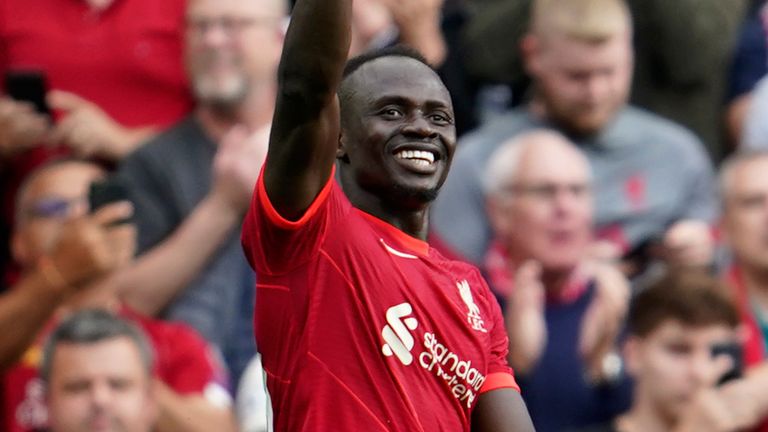 "Our plan was to stay in the game, and conceding the goal before half-time wasn't good for us, but we came back in the second half, we tried, and unfortunately couldn't score."

Not content with reaching his Premier League century last weekend, Salah was determined to add to his tally and made their opener with a fine move from which Mane scored on the rebound.

His movement was also enough to escape the clutches of Riedewald for Liverpool's second in the closing stages to net a 101st goal in the league.

"For much of the game, this was the same player who had impressed so much at Leipzig, showing good awareness to hold off Christian Benteke and bail out Virgil Van Dijk following a rare slip early on.

"He needed saving himself after a heavy touch allowed Wilfried Zaha in down the right after half-time and was partly at fault to allow Odsonne Edouard his chance from Martin Kelly's cross.

"But with some bright moments and a clean sheet on his debut, there were plenty of positive signs from Liverpool's newest defensive recruit, and he will get plenty more chances to impress in a red shirt before long."

Crystal Palace, already eliminated from the Carabao Cup, have a nine-day rest until they appear on Monday Night Football against Brighton on Monday, September 27 on Sky Sports Premier League from 7pm; Kick-off at 8pm.