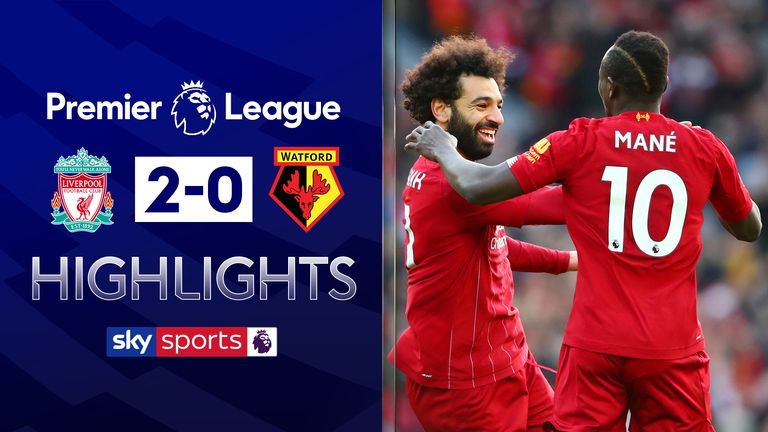 Mohamed Salah's superb double gave an under-par Liverpool a 2-0 victory over bottom side Watford to extend their lead at the top of the Premier League.

After his goal in midweek, Salah showed he was back to his best again with a fine turn and curling finish to give Liverpool the lead (38), but that came sandwiched between two big Watford chances as both Abdoulaye Doucoure and Ismaila Sarr fluffed from fine positions.

In Nigel Pearson's first game in charge, Watford caused more problems after the break as Alisson brilliantly denied both Sarr and Gerard Deulofeu, but Liverpool doubled their lead late on as Divock Origi's miscued effort was cleverly flicked home by Salah at close range (90).

The result leaves Liverpool 10 points clear of Leicester after they drew 1-1 with Norwich, and 17 clear of third-place Manchester City before they go to Arsenal on Super Sunday, live on Sky Sports Premier League. Watford remain bottom.

The now 40-point gap between Liverpool and Watford is the largest between any two sides in the top flight since three points were introduced for a victory in 1981, but that chasm was not evident early on.

Watford were stubborn positionally and had several chances to score before Salah's opener, the best coming just a minute before as Doucoure fluffed his effort having been found unmarked 12 yards from goal.

Liverpool broke forward just seconds later as Sadio Mane played Salah through down the left, and the Egyptian brilliantly turned Kiko Femenia before curling into the far corner with his weaker right foot from 15 yards.

Watford came again, however, and should have levelled as Deulofeu's cross-shot was parried kindly into Sarr's path by Alisson, but the 21-year-old's woeful finish summed up the visitors' game.

Watford continued to cause problems as Sarr was denied by Alisson at an angle, before Mane's headed finish from Xherdan Shaqiri's cross was chalked off by VAR for a marginal offside.

Deulofeu was played through one-on-one with Alisson by Deeney, but again the Brazilian goalkeeper stood firm, and there was more concern for Liverpool as Gini Wijnaldum was subbed off with what looked like a hamstring complaint.

Liverpool's nerves were palpable; Virgil van Dijk's poor backpass ran just wide of the post as Alisson scampered back, and Deulofeu hit the outside of the post directly from the resulting corner.

Liverpool made three changes from the side that beat RB Salzburg on Tuesday; Robertson and Keita dropped to the bench while Lovren was out with an injury, meaning Gomez, Shaqiri and Milner, who has a new contract, came in. Neco Williams, the 18-year-old right-back, was on the bench for the first time in the Premier League this season.

Watford made two changes as Masina and Pereyra drop out, replaced by Mariappa and Hughes. Both Pereyra (groin) and Masina (thigh) were out with injuries.

But the anxiety was eased in the last minute as Mane's cut-back from the right was mis-hit by sub Divock Origi, falling kindly for Salah to cutely flick back towards goal and over the line.

Salah's two moments - of quality and then audacity - got Liverpool out of jail in one of their most stuttering shows of the season. But once more, the leaders' character and winning mentality when the performance didn't match it only goes to prove their title credentials.

Liverpool boss Jurgen Klopp: "I think I've said it 500 times, December, January especially, you need to show a resilience, that's the most important thing. We showed that, but so did Watford. You can make early judgements, but we can't. We just have to recover and go onto the next game." 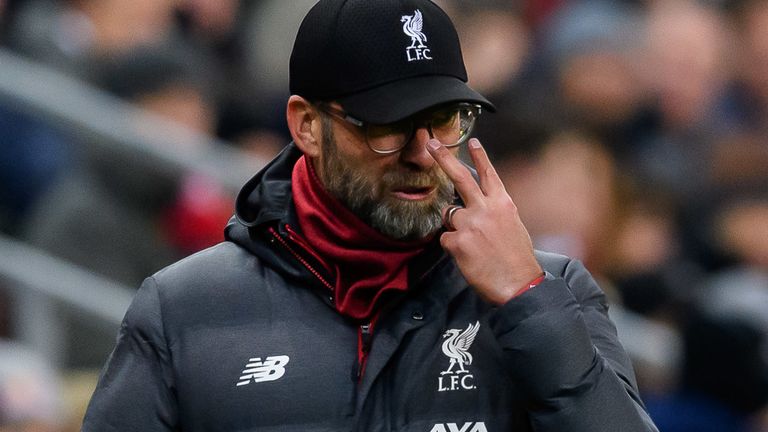 Watford boss Nigel Pearson: "We created some unbelievably good goalscoring situations but were unable to
convert them today. It is of scant reward that we leave here with nothing for our efforts in terms of points but I was very pleased with the collective work ethic." 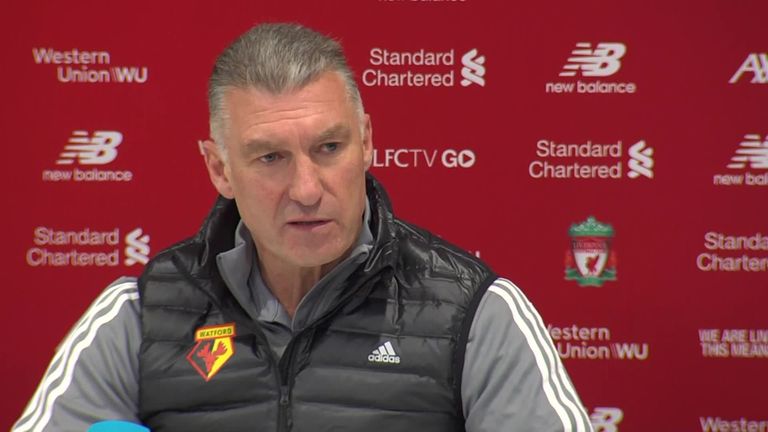 Nigel Pearson could have been forgiven for being frustrated afterwards but the main emotion after seeing his side go to Anfield and have the better chances is likely to be optimism. Watford may have become the first team not to score at Liverpool so far this season but it wasn't because of a lack of opportunities.

On another day, Watford could have won. But that day will need to come soon because it has been a recurring theme for them this season. No team in the Premier League has a bigger gap between their expected goals - based on the quality of their chances - and their actual goals. Watford should have scored 20. Instead they have nine.

Is this bad fortune? An issue that can be resolved in time if confidence returns? That is the hope for Pearson and if it proves to be the case then Watford's top-flight status could yet be salvageable. The fear, of course, is that it is symptomatic of the team's deficiencies. What is certain is that Pearson will need to turn things around quickly for Watford to stay up.
Adam Bate