Report and highlights from the Sky Bet Championship clash between Luton Town and Sheffield United at Kenilworth Road as the Hatters and the Blades played out a relatively uneventful goalless draw on Saturday afternoon. 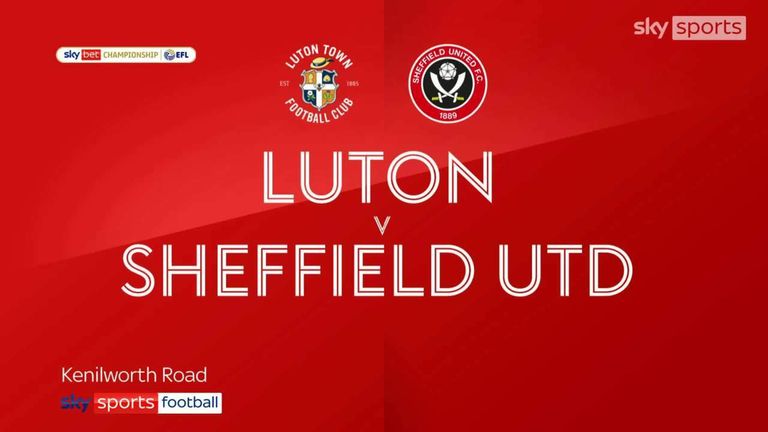 Highlights of the Sky Bet Championship between Luton Town and Sheffield United.

Sheffield United were left still searching for their first win of the Sky Bet Championship season after hanging on for a goalless draw at Luton.

The Blades have struggled to adapt to life back in the second tier following their relegation last season and never looked like ending their quest for a victory at Kenilworth Road as the Hatters produced a dominant second-half display that was only lacking a goal.

The visitors started brightly, full-back George Baldock left unmarked to head over the bar at the far post after only two minutes

Oli McBurnie then sliced a shot off target from just outside the area.

Town began to threaten after the early exchanges, Harry Cornick sending over an excellent cross from the right that Elijah Adebayo could only direct into the stands.

And Cornick's long throw bounced off the head of McBurnie and into the grateful gloves of Wes Foderingham.

A bright start to the second period saw Luton threaten an opener.

Captain Kal Naismith sent in a driven cross that was too strong for Adebayo and then met Gabe Osho's hanging cross himself, only to try and set up a team-mate rather than go for goal, Allan Campbell finding the side-netting.

Fred Onyedinma thought he had put Luton in front after 56 minutes, taking Naismith's long ball in his path and going through to poke past Foderingham, but he was adjudged offside and the goal was disallowed.

Adebayo then closed down Foderingham, whose clearance went only as far as Cornick. He beat his man but, from eight yards out, crashed a shot against the underside of the bar.

Naismith's long-range effort was well handled by the Blades goalkeeper, but at the other end all United could muster was a weak Luke Freeman effort that dribbled through to Simon Sluga.

Onyedinma had another go on his left foot, powering a shot into the side-netting, with the winger also denied by the legs of Foderingham from Adebyao's slipped pass.

Town went close again with three minutes left as James Bree let fly from 20 yards, but the effort curled just the wrong side of a post.

In stoppage time, Blades midfielder Sander Berge went down in the area under a challenge from Pelly-Ruddock Mpanzu, but referee Andy Davies waved away the penalty appeals as both sides had to make do with a point.

Luton's Nathan Jones: "I thought we did enough to win the game, but what I'm really pleased with and what shows what we have here is just how we bounced back from last week. We had to take one and the underlying thing is we're constantly punching above our weight at this level, so now and again we're going to take one on the nose and it's about how we react.

"Today we went toe-to-toe with Sheffield United, one of the favourites for the league and they're going to click as they've got some fantastic players, but I thought we were excellent from start to finish. We did all the basics well, pressed well, denied them - they had one chance in the first minute, but apart from that, very little. I thought we bounced back and I'm proud of the club."

Sheffield United's Slavisa Jokanovic: "I can't be satisfied, we didn't show enough quality. We were without enough energy and at the end of the game I did not have the sensation that we were close to winning the game. We tried but without the quality and the energy it wasn't easy for us. In general, it has not been a positive start to the season.

"It's not a question about shape or formation, it's about how to play football, it's about intent. We changed at half-time because Luton were playing lots of long balls, so we made the decision to play one more offensive player up to make more damage. But it didn't work especially good and, without the basics, it was too complicated to create the positive things and get closer to winning the game.

"A lot of these players have played Premier League football, but you cannot be scared about the game. You cannot lose the game before you start. We need personalities. We needed to show more, we needed to create more. There is much to work on."