Malawi vs Senegal. Africa Cup of Nations Group B.

Match report as Senegal finish top of Group B with stalemate against Malawi; Malawi and Guinea both finished with four points but the latter take second spot on the head-to-head rule 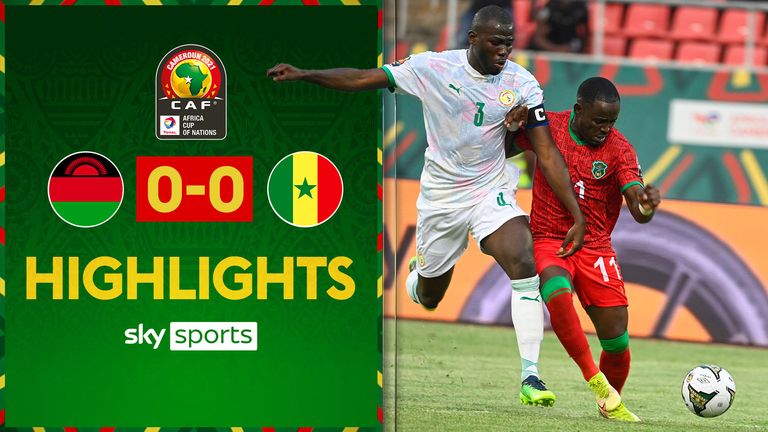 Highlights of the Africa Cup of Nations Group B match between Malawi and Senegal.

Heavyweights Senegal failed to fire again and were fortunate not to concede a penalty in a 0-0 draw with unfancied Malawi on Tuesday but they still finished in top spot in Group B at the Africa Cup of Nations.

Senegal won the group with five points, despite scoring only once in their three matches via a late Sadio Mane penalty against Zimbabwe in their opening game.

Malawi and Guinea both finished with four points but the latter took second spot on the head-to-head rule, while the Malawians must now wait to see if they are one of the four best third-placed teams, who also advance to the next round.

Malawi were left fuming when Cameroon referee Blaise Ngwa cancelled a late penalty he initially awarded them at the Kouekong Stadium in Bafoussam, after Gomezgani Chirwa was brought down in the box by defender Bouna Sarr.

The decision was overturned on review, but Senegal can regard themselves as fortunate as there was both a pull of the shirt and contact.

Malawis president Lazarus Chakwera had offered each of those who played against Senegal a payment of 1 million Kwacha ($1,223) if the team advances to the second round. The chance to make history and be the first team from the country to progress in the tournament may be more rewarding, however.

Senegal had newly crowned FIFA Best Mens Goalkeeper Edouard Mendy back in the team after he missed their first two matches due to COVID-19, and he was arguably the busier of the glovemen, certainly in the first half.

Malawi used the pace of Frank Mhango and guile of Francisco Madinga to create a number of chances in the opening period that forced the Chelsea keeper into smart saves.

But the best chance of the half fell to Mane, who met Sarrs cut-back but managed only to scoop the ball over the crossbar with the net gaping.

Mhango had a free-kick that was deflected just wide of Mendy's goal by Senegal midfielder Cheikhou Kouyate, whose earlier yellow card will mean he misses their second round fixture.

Habib Diallo steered a powerful header from a free kick on target but Malawis debutant goalkeeper Charles Thom produced a fine save. Thom was in the side because regular number one Ernest Kakhobwe has suspected malaria.