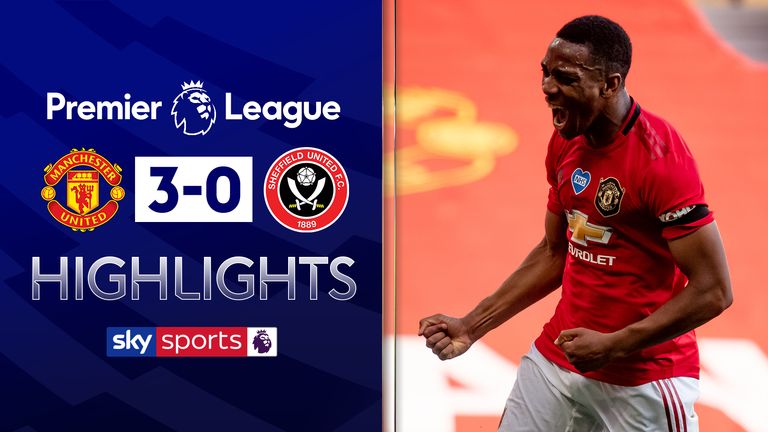 Anthony Martial produced his standout performance in a Manchester United shirt as he bagged a hat-trick in a 3-0 win over Sheffield United.

The French striker has had his critics at Old Trafford but gave a lacklustre Blades outfit the run-around, opening the scoring with a close-range finish from a Marcus Rashford cross (7).

Chris Wilder's men did not heed that warning as they allowed another cross from the right flank from Aaron Wan-Bissaka to be clinically finished by Martial (44). He completed his hat-trick by finishing off a flowing move (74) that involved both Bruno Fernandes and Paul Pogba, who were starting together for the first time for Manchester United.

The result stretches Ole Gunnar Solskjaer side's unbeaten run to 13 games across all competitions - a period where they've scored 33 goals and conceded just three. It also moves them back to within two points of Chelsea in fourth - Frank Lampard's side play Manchester City on Thursday.

Sheffield United's season seems to be ending with a whimper having taken just one point from three games since the restart without scoring.

Wilder has built his success at Sheffield United around making his team incredibly hard to beat but with two of his first-choice back three unavailable, they looked brittle through the middle. It took the hosts just seven minutes to break the deadlock.

Oliver Norwood was brushed aside far too easily by Rashford down the right before the striker skipped past Phil Jagielka, who became the oldest outfield player to play at Old Trafford since Gary Alexander for Burnley in Jan 2010 and looked every inch of his 37 years.

The Blades still had plenty of defensive reinforcements in the box but Martial reacted quicker than Chris Basham to Rashford's ball in and flashed a first-time finish past Simon Moore.

Martial almost repaid the favour to Rashford 10 minutes later when bursting in behind and squaring the ball for Rashford to seemingly tap into an empty net but he somehow skewed the effort wide with the goal gaping.

Wilder did get a message across to his players at the first drinks break in scorching conditions in Manchester which helped his team get a foothold in the game. However, they were restricted to poor-quality long-range efforts.

It was United who carried the bigger goal threat and they doubled their lead just before the break.

Again the attack came down the visitors' left with Fernandes and Pogba linking to send a pass out to Wan-Bissaka, whose cross was finished emphatically by Martial.

The dispirited Blades did muster a half chance after the break but substitute Oli McBurnie couldn't connect with Basham's precise centre. That was the last we saw of Wilder's team as an attacking force as United turned the game into an attack vs defence session.

The third goal arrived on 74 minutes when Fernandes and Pogba coolly moved the ball onto Martial who sent the ball quickly between himself and Rashford before showing wonderful skill to scoop the ball over the goalkeeper.

Solskjaer made five substitutions in the final 10 minutes, including the hat-trick hero as United comfortably saw the game out.

This was the Martial that all United fans want to see week in, week out. He looked sharp, creative and most importantly, found his ruthlessness in front of goal to take his tally for the season to 14 - a very healthy return.

The task for Martial is to now build on this performance to instil belief that he is the man to lead the line in the long term at United. Anthony Martial speaks to Sky Sports following his hattrick in their 3-0 win over Sheffield United.

A point picked up by Graeme Souness, he said: "Sometimes Martial seems to hide his talent and not look interested, but he was tonight - maybe he needs to score early in every game he plays to stay interested."

Amazingly, this was Manchester United's first Premier League hat-trick since the retirement of Sir Alex Ferguson at the end of the 2012/13 season, with Robin van Persie the last player to score one in April 2013 against Aston Villa.

It was Martial who took the man-of-the-match award and the match ball at Old Trafford but Manchester United supporters are entitled to feel excited about rather more than that.

It does not feel like a coincidence that Manchester United's first Premier League hat-trick since Sir Alex Ferguson's reign came in the first game that Pogba and Fernandes have started together.

Seldom in recent years have Manchester United passed the ball around with such elan.

It was most evident in the build-up to Martial's hat-trick goal when Pogba, taking up a deeper position for much of the game, drilled a forward pass into the feet of Fernandes.

The Portuguese, who took up countless good positions in the half spaces in front of Sheffield United's defence, flicked the ball to Martial and a bit of magic from him did the rest.

It was the best move of the match but there were plenty of little signs that not only can Pogba and Fernandes play together - as Solskjaer had insisted - but that they can flourish.

They certainly seemed to enjoy each other's presence on the pitch with Pogba, in particular, making his first start since September, looking for his new team-mate at every opportunity.

Pogba played six passes to Fernandes in the first half - his most frequent pass - while Fernandes found the Frenchman on five occasions, more than he passed to anyone else.

2 - Pogba plays his first pass of the game, a header into Fernandes’ path

9 – Fernandes almost slips Martial clean through in a central position

17 – Fernandes’ free-kick pushed over the bar by the goalkeeper

19 – Pogba engineers space to find Fernandes who shoots at goal

Manchester United are playing with brio once more and much credit must go to their new signing.

"He is infectious, Bruno Fernandes," said Gary Neville on co-commentary for Sky Sports.

"It is a long time since I saw a player have an impact on a team like this. He has single-handedly dragged Manchester United from looking pretty average to looking a pretty good team. Some of his play is wonderful. Everything seems to revolve around him."

With Pogba "playing in a more controlling role allowing Bruno Fernandes to get forward more" the early indications are that the team's former focal point is relishing the company.

Manchester United boss Ole Gunnar Solskjaer: "I enjoyed the way we set about the job. It was warm but the pressing was really good - we kept Sheffield United away from playing their own game. That was important. The build-up into the last pass or finish was good but we need to do better with all the spaces we created. I expect them to take the moments, thankfully it didn't cost us today. Today we created enough to win by more. In other games we've created enough but haven't won them. We need to be progressive and aggressive with our final passing." 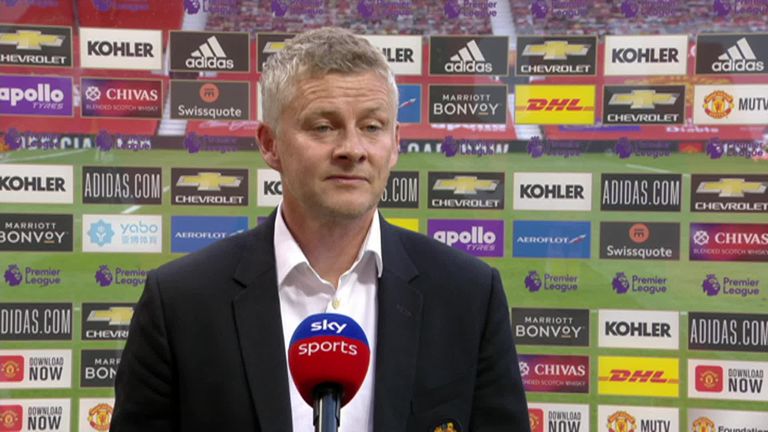 Ole Gunnar Solskjaer tells Sky Sports he is happy with his team's performance but thinks there is room for improvement following their 3-0 win over Sheffield United.

Sheffield United boss Chris Wilder: "The first goal puts us up against it and when you give the ball to quality players, they gain confidence and they just grew and grew. The goal just before half-time killed the game and from then it's comfortable. They were far better than us, especially at the top of the pitch.

"We're not in great nick and we have to find an answer because the league is unforgiving. Physically, we're second best all over the pitch. We're not stepping into people, getting close to people and when we've got the ball, we're giving it away quite cheaply. There's no rhythm and flow at the moment - we've got to find it pretty quickly. If we don't the season's quickly going to fizzle out and I don't want that to happen." 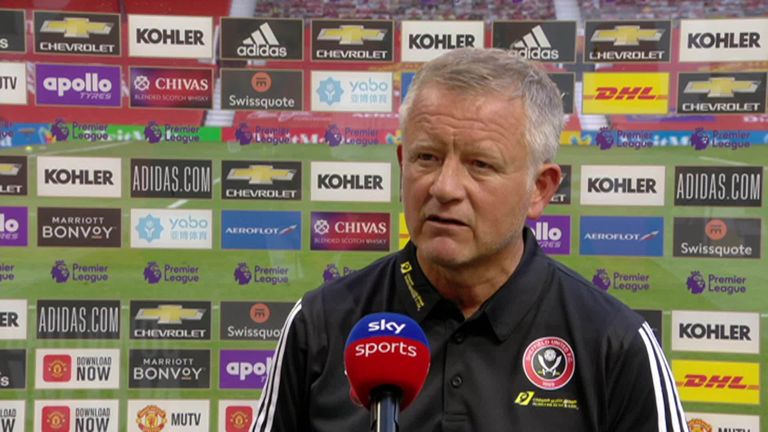 Sheffield United's Chris Wilder says that Manchester United were far better than them as they fell to a 3-0 defeat at Old Trafford..

Both teams are in FA Cup quarter-final action at the weekend. Manchester United host Norwich on Saturday (5.30pm) and the Blades take on Arsenal on Sunday (1pm) for a spot in the last four.