Report and highlights as Stuart Dallas scores with both of Leeds' shots on goal, including the winner in injury time; Liam Cooper had been sent off at the Etihad just before the break after a VAR review for a challenge on Gabriel Jesus 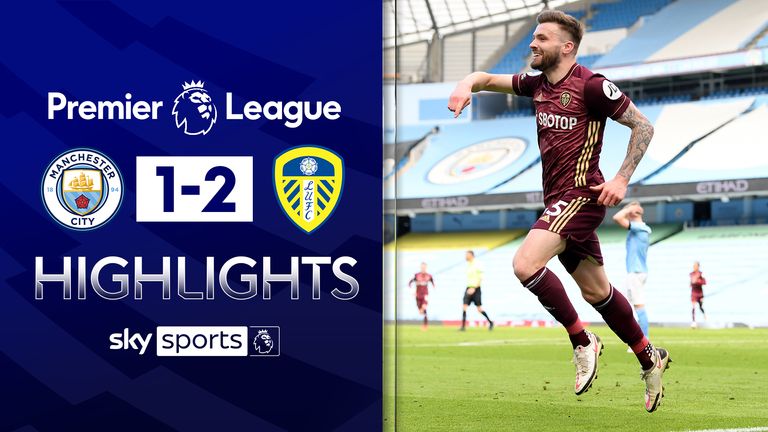 FREE TO WATCH: Highlights from Leeds United's win against Manchester City in the Premier League

Leeds United pulled off a remarkable 2-1 win away to champions-elect Man City with Stuart Dallas at the double, despite playing with 10 men for 45 minutes.

Pep Guardiola's men needed just 11 more points to secure the Premier League title but were met by a resilient Leeds side, who took the lead at the Etihad Stadium when Dallas found a way through (42).

The game swung in City's favour just before the break when Liam Cooper was dismissed for an ugly lunge on Gabriel Jesus which was upgraded from a yellow card to a red after VAR had instructed Andre Marriner to review the decision on the pitchside monitor.

City set up camp in the Leeds half with the extra man but Marcelo Bielsa's men were dogged in their defending and it took until 14 minutes from time to level it up when Ferran Torres struck.

The game only looked like going one way from that moment but Leeds continued to dig in and sensationally staged a devastating counter-attack which was finished off by the tireless Dallas (90+1) as Leeds managed to win despite having just two shots on goal to City's 29.

Man of the match:Stuart Dallas

How Bielsa took down Pep...

City, having made seven changes following their midweek Champions League win over Borussia Dortmund, failed to play with their usual spark in the early stages.

Leeds sat in and looked to hit down City's left with Benjamin Mendy and Nathan Ake targeted as a potential weakness. Their best opening saw Tyler Roberts break into the box on the right but his ball across goal was too far behind Patrick Bamford.

City gradually began to increase the tempo and Torres had a good effort brilliantly blocked by Cooper at point-blank range following a corner as City looked a major threat from all set pieces.

Raheem Sterling started to see more of the ball as half-time approached but his finishing was off, blasting a first-time shot horribly wide, after being teed up by Fernandinho.

City were playing with the arrogance of champions but were punished for not taking their chances when Helder Costa broke down the left and passed inside to Bamford. Dallas then latched onto an inviting lay-off on the edge of the area, hitting a firm low shot that left Ederson rooted to the spot as it rebounded in off the base of the post.

It was a lead that came against the run of play and Leeds' hopes of hanging onto it almost immediately suffered a blow as Cooper was dismissed for a bad challenge on Jesus. Marriner initially showed a yellow card after Cooper caught the Brazilian on the knee in his follow-through but revised that to red after reviewing the incident on the pitchside monitor.

Oleksandr Zinchenko - playing more advanced than usual - warmed the palms of Illan Meslier after the break as City dominated territory without really forcing the goalkeeper to make any fine saves.

Ilkay Gundogan fired over and Fernandinho had a powerful effort palmed over by Meslier, who also saved from Joao Cancelo.

The equaliser finally came 15 minutes from time as Silva flicked the ball into the path of Torres and the Spaniard clipped it past Meslier.

Many would have expected Bielsa's side to crumble in the closing stages but it was Leeds that would produce the next moment of quality on the counter-attack.

Dallas broke clear and slid a fine finish through the legs of Ederson. An astonishing finish to cap a perfect away day for Bielsa.

Man of the match: Stuart Dallas

Who else? His goals stood him out for the crowd, both excellently taken, but just as impressive was his work without the ball, especially in the second half when Leeds had to show tremendous mettle to swat away wave after wave of Manchester City attacks. No player covered more ground than the Northern Irishman (12.13km) in a performance that will only further enhance his legendary status among Leeds supporters. This is a day he'll never forget.

Man City manager Pep Guardiola said: "What happens when you lose a game is you realise how difficult it is what we've done so far. When you see the last 27 or 28 games we've won 26, you realise how difficult it is what we have done. The Premier League must be won so we need points still because our opponents could win all their games, so we need to do it again. Now we have, of course, Aston Villa in the middle but the next four games, three are like we have finals, Champions League, FA Cup, Carabao Cup. Defeat sometimes is necessary to understand what we have done and what we have to do to move forward."

Leeds manager Marcelo Bielsa said: "They dominated the game, the majority of the chances at goal were in their favour. But the result was deserved because of the character, personality, effort and fortitude from a mental and physical point of view.

"It is a little bit strange to say it - as it would have been fair for City to win - but we deserved to win."