Match report as Mohamed Salah scores the fastest Champions League goal for Liverpool after 55 seconds; the forward (22) has overtaken Steven Gerrard (21) to become Liverpool's all-time leading European goalscorer; Takumi Minamino's late goal is ruled out for handball in the build-up

A much-changed Liverpool were held to a 1-1 draw by Midtjylland in their final Champions League Group D game after VAR denied Takumi Minamino a late winner.

Liverpool had already been confirmed as group winners and Jurgen Klopp made eight changes, naming the Reds' youngest ever starting XI in the competition (24 years and 26 days), including a Champions League debut to 19-year-old Leighton Clarkson.

But it was one of the senior players that put them ahead when Mohamed Salah slotted home through goalkeeper Jesper Hansen's legs after 55 seconds - scoring Liverpool's fastest Champions League goal.

But Midtjylland - who have already finished bottom of Group D - pushed for an equaliser, especially after the break, and were gifted the breakthrough when VAR awarded them a penalty. Caoimhin Kelleher was penalised for sending Anders Dreyer over with a stray leg and, after a lengthy review, Alexander Scholz (62) powered the spot-kick home.

Klopp threw on his big guns as the game went on and Liverpool thought they had scored the winner when Minamino poked home in the 89th minute, but VAR was there again to rule it out for handball against Sadio Mane in the build-up.

How VAR dominated in Denmark

Liverpool began their last Champions League group game of the season with a bang when Salah scored inside a minute. It was a poor Midtjylland pass that he took advantage of, driving through the midfield with the stretch of captain Erik Sviatchenko unable to stop him. Hansen came out to meet him but Salah's well-timed poke through the goalkeeper's legs did the job as the ball slowly bobbled over the line.

Salah almost made it two after he collected a lovely, chipped pass from Minamino, but his strike was saved by Hansen at the near post with the offside flag also raised. The goalkeeper denied Liverpool again soon after when he pushed away Diogo Jota's flicked effort from close range.

Man of the match: Fabinho.

Both sides went close just after the half an hour mark. Salah squared the ball for Divock Origi, but the striker slashed his diagonal shot past the far post, showing just a touch of rustiness in only his fourth start of the season. Liverpool had never conceded to a Danish side in the Champions League before Wednesday and had Fabinho to thank for keeping that record intact in the first half. Sory Kaba nodded Dion Cools' right-wing cross goalwards at the back post, but the makeshift defender was there to hack the ball off the line.

It did not look to be Midtjylland's evening when they hit the crossbar early in the second half. Half-time substitute Billy Koumetio's miscued header allowed Evander to strike, but it could only rattle the woodwork. Kaba then tried his luck with an overhead kick, but it went just wide of the post. The striker went close again soon after, but his header from Paulinho's lofted cross also missed the target.

But there was VAR controversy to come as Midtjylland were awarded a penalty in the 61st minute. Dreyer was initially played through with a long pass and was sent over by a dangling Kelleher leg as he stretched himself to make the save. The linesman's flag was initially raised for offside, but VAR reviewed the incident and found that Dreyer was, in fact, onside in the build-up.

The next question hinged on whether Kelleher had fouled the midfielder and after the referee consulted the pitchside monitor, he awarded a penalty and the Liverpool goalkeeper was booked. Scholz confidently dispatched the spot-kick past Kelleher for his second Champions League goal of the season.

Despite the introduction of a raft of Liverpool stars, it was Midtjylland who looked the more likely to score next. In fact, they did have the ball in the back of the net in the 77th minute, but Scholz's second of the evening was correctly ruled out for offside after another VAR intervention.

The technology was not done there either as Minamino was denied a late winner. Mane nodded down Jordan Henderson's cross, which the forward slotted home, but the linesman had his flagged raised. VAR stepped in and eventually disallowed the goal for handball against Mane, deeming his header hit his own arm before a defender's in the build-up as the game ended all square.

Yes, Fabinho only played 45 minutes but it was his absence in the second half that really demonstrated just how vital he was to a young Liverpool defence.

The Brazil international was there to make crucial blocks (1), interceptions and clearances (5) through the first half. This was epitomised when he cleared off the line from Kaba's header. Credit must also go to Rhys Williams at centre-back too, who again looked assured in that position.

Fabinho was replaced by debutant Billy Koumetio in the second half and despite some good early touches from the 18-year-old, he looked more nervous as the game continued and Midtjylland's attack did not let up. Indeed, they had 15 second-half shots to five in the opening 45 minutes and Fabinho's withdrawal was certainly a big part of that.

With Virgil van Dijk and Joe Gomez out for much of the season, Fabinho's first-half performance and his noticeable absence after the break demonstrates his huge importance. 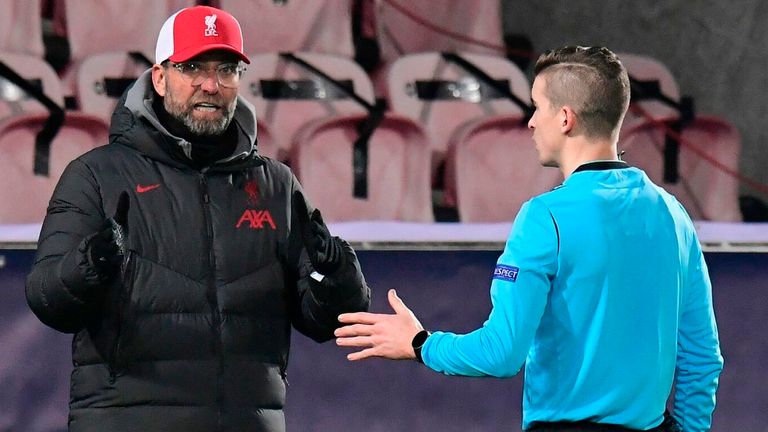 Liverpool manager Jurgen Klopp says he is beginning to reconsider his stance of supporting the use of VAR.

Liverpool manager Jurgen Klopp said: "Two different halves, completely different. I liked the football we played in the first half, especially with the so-much-changed team we had tonight. The way we played, the way the boys adapted, not to forget that Takumi Minamino only played the second time in that position... We had a lot of these moments [chances in the first half] which we could have used in a better way and that was good.

"The situation where Midtjylland scored the goal was really unlucky - Kostas Tsimikas was outside I think, now Leighton was in the left-back position and that's why it was I think really close with offside… if there is the usual player in that position then he is probably offside. We thought it was offside but it was not.

"So, the penalty, 1-1 and then the momentum really swapped to Midtjylland. They were really believing and we were only hard-working. In the moments where we played football, we were immediately in and around their box with really a lot of space because of the man-marking of Midtjylland - and when you move in the right moment you can really use that. We did that in some moments really well but in the end, they scored their goal and another one which was slightly offside.

"[It's] one record after the other [for Salah]. I didn't know that he could break this record tonight [overtaking Steven Gerrard] but I'm pretty sure he is proud of that. He should be. Exceptional player, absolutely exceptional player.

"Since we worked together obviously a lot of things clicked really for all of us. He helps the team massively and he knows and appreciates the help of the team as well. If we would have only Mo, even the incredible number of goals he got would not have been enough to be as successful as we were so thank God others scored a lot of goals as well.

"That made this team pretty successful but that Mo is a very exceptional player - I think nobody doubted it, but if you need numbers to prove it then he delivers that as well."

Liverpool will find out who their last-16 opponents are when the draw is made on December 14. Before then, they will travel to Fulham in the Premier League on Sunday, live on Sky Sports; kick-off 4.30pm.