Match report as Netherlands eased into the last 16 of the 2022 World Cup in Qatar with a 2-0 victory over the hosts. Cody Gakpo's third goal of the tournament and a second from Frenkie de Jong sealed the win

Netherlands eased into the last 16 of the World Cup as they clinched top spot in Group A with a 2-0 win over Qatar.

Cody Gakpo opened the scoring midway through the first half with his third goal of the tournament, while Frenkie de Jong added a second shortly after half-time.

Louis van Gaal's side head into the knockout stages, where they will next face the runner-up in Group B - which at this stage could be any one of England, Iran, USA or Wales.

As a result, Qatar become the first hosts in World Cup history to fail to pick up a win or even a point.

There was no doubt who had been the star of the tournament for the Netherlands so far, and Gakpo struck again on 26 minutes to give his side the lead.

In the opener against Senegal, he had scored with his head, against Ecuador he netted with his left, and against Qatar, he completed his perfect hat-trick with a right-footed drive from just inside the area.

After 49 minutes it was two. Davy Klaassen's cross came off a defender's head and found Memphis Depay at the far post. His effort from close range was saved, but it fell kindly for De Jong to prod into an empty net from just a few yards.

Netherlands thought they had a third on 68 minutes as Steven Berghuis tapped home from close range just a few minutes after coming on as a substitute, but VAR ruled the goal out for a handball by Gakpo in the build-up.

But it didn't cost them, as they prepare to turn their eyes to the evening's Group B games to find out who their opponents in the last 16 will be.

Netherlands head into the last 16 as group winners, where they will face the runner-up in Group B. They are joined by Senegal who beat Ecuador 2-1 in the other Group A game.

Qatar become the first side in World Cup history to fail to win a game as hosts. 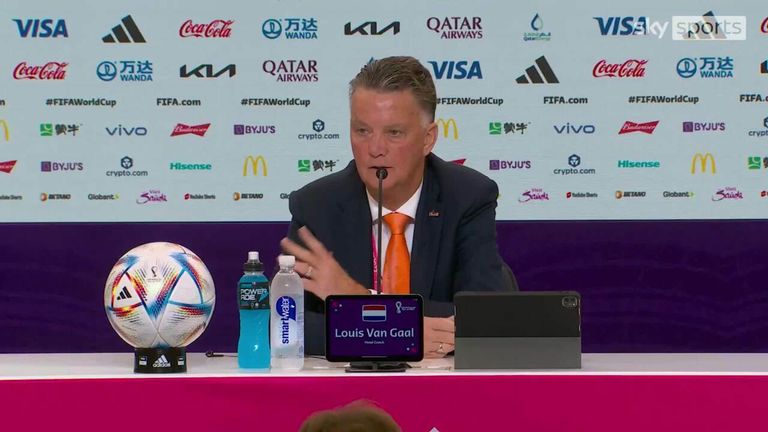 Louis van Gaal tells a reporter they have a 'different perspective of football' when asked if he found the Netherlands game against Qatar too dull.

A typically belligerent Netherlands head coach Louis van Gaal took issue with criticism of his side's World Cup performances so far despite them topping Group A.

A 2-0 win over hosts Qatar saw them finish with seven points, having previously beaten runners-up Senegal by the same scoreline and drawn 1-1 with Ecuador.

But even though they had very few alarms in their opening three matches, Van Gaal was grilled in his post-match press conference about why the games were not particularly enjoyable to watch.

"I'm not going to expand on it because I think you have a different opinion of football," he said to one journalist.

"Why don't you write you think it is terribly boring and you are going home tomorrow because you couldn't care less?"

When it was put to him fans were "grinding their teeth" on social media about the displays Van Gaal responded: "That's disappointing but I don't agree with you.

"That's your opinion but I don't think your opinion is the correct opinion. I think everyone would be rather proud we are progressing to the next round.

"I think things are not as bad as you say they are."

Player of the match - Cody Gakpo

"The Dutch forward has three goals in three consecutive World Cup matches and is the main reason why the Netherlands have cruised through to the knockout stages as group winners.

"It's not just the range of the three separate goals that make him such a great talent at 23 years old. He plays out wide for his club and centre-forward for his country. He can be a penalty box presence but, as his goal against Qatar showed, he can come from deep and play further back if required.

"Tenacious, aggressive but blessed with flair, the forward joins Kylian Mbappe at the top of the World Cup Golden Boot standings. It's excellent company, considering this is his first World Cup.

"He shows he has the full package - and maybe this World Cup, like Mbappe and James Rodriguez did before him, is becoming his own.

"It won't be long until one of the superclubs takes him off PSV Eindhoven's hands - it could possibly happen in the January window."

"Cody Gakpo is rather a young player, he's only been playing for PSV for two or three years and always played on the left-hand side.

"He didn't want to play centre or number 10 but he did have to play those positions for me and now he thinks I'm a good head coach!

"Things can change of course but Cody Gakpo has everything it takes to become a star and he has a wonderful personality because he is open-minded about everything and anything."

Qatar bow out in disappointment

Already out of the tournament after two games, Tuesday night was a chance for the host nation to avoid some unwanted World Cup history against the Netherlands.

Unfortunately, they failed to do so. They became the first hosts to not pick up a single win or even a point in the group stage, while they also became the first individual host nation to lose three matches at a single World Cup tournament.

They also conceded seven goals, the outright most ever by a single host nation in the same group round of an edition of the tournament.