Juve will to pay €10.5m (£9.47m) in additional costs for player's agent Mino Raiola, intermediaries and other "accessories"

Juventus have completed the signing of Netherlands centre-back Matthijs de Ligt from Ajax.

The 19-year-old, who had previously been linked with Manchester United and Barcelona, has signed a five-year contract with the Serie A champions.

Juventus say they will pay an initial fee of €75m (£67.8m) across five financial years, making De Ligt the most expensive defender in Italian top-flight history.

Juve will also pay another €10.5m (£9.47m) in additional costs for the player's agent Mino Raiola, intermediaries and other "accessories".

The player also has a €150m (£134.8m) release clause which will start from the third year of his contract.

Sky Sports News reported on Monday that Juventus agreed personal terms with Raiola, worth £10.8m-a-year plus bonuses during De Ligt's time in Turin.

De Ligt - Ajax's youngest-ever captain - led the Eredivisie club to a domestic league and cup double last season, as well as taking them to the Champions League semi-finals in which they lost to Tottenham in the final seconds in Amsterdam.

Juve have already signed another young centre-back this summer in 21-year-old Turkey international Merih Demiral, brought in from Sassuolo, as Andrea Barzagli departed the club after eight seasons. 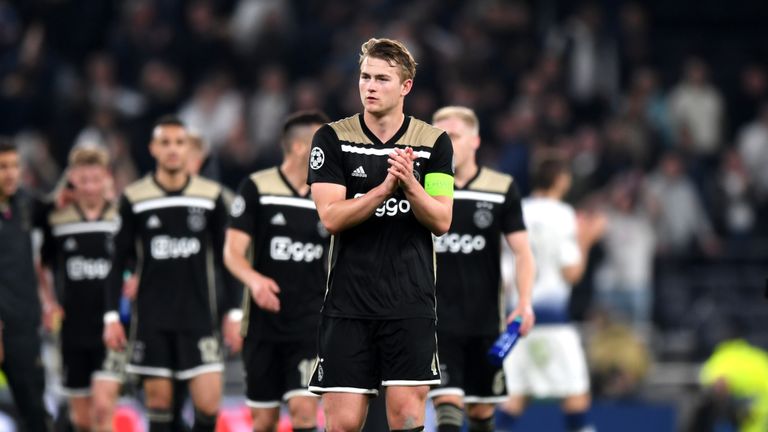 De Ligt arrives in Turin to undergo a medical with Juventus, ahead of transfer from Ajax

The club have also brought in midfielders Aaron Ramsey and Adrien Rabiot on free transfers, with goalkeeper Gianluigi Buffon also back after one season away at Paris Saint-Germain.