Southgate: "It's good from Chrissy's point of view that he's settled as well as he has. There's opportunity, but it wasn't one we thought of for this month"

Chris Smalling has rediscovered his game in Italy this season, but can he revive his Manchester United and England career?

The 29-year-old has become Roma's cornerstone during the first part of his season-long loan and turned into the Serie A side's defensive leader, marshalling his back-line partners and drawing widespread praise for his influence on team-mates.

Smalling has adapted swiftly to Italian football since his debut in September, cementing his spot in the starting line-up while starring in domestic charts for effective clearances, tackles won and passing accuracy for a defender.

Sky Sports News understands Manchester United expect him to return to the club in the summer and have received no bids from Roma to make the move permanent, although the Italian club remain keen on that, according to Sky in Italy.

Here, we analyse how the United man got back to his best in an idyllic start to life in Italy and evaluate whether Gareth Southgate can afford to overlook him for Euro 2020...

'This is the perfect type of football for me'

Ahead of Smalling's arrival in the Italian capital, United boss Ole Gunnar Solskjaer pointed out that not many English players have the guts to leave the safe haven of the Premier League to try their luck in a foreign country.

"Watching Serie A over the years, one of the top leagues alongside the Premier League, and being able to come and experience that - and at such a big club as well - it was the perfect opportunity for me," said the defender in his first interview.

Smalling had no need to readjust his playing style on his debut in Paulo Fonseca's high defensive line against Atalanta. A man-of-the-match performance in Lecce was backed up by a clean sheet at Sampdoria and a win against AC Milan. Then, he impressively kept Udinese's attack at bay in a 4-0 away win despite Federico Fazio's 31st-minute dismissal, scoring his first goal for the club on top of that.

Fonseca makes playing out from the back a central feat of his game. He places serious trust in his defence's comfort in possession, especially when under pressure, and has found in Smalling his team's offensive move initiator. The Englishman's sense of position and power in the air had a massive stabilising effect on a team that last season was suffering from alarming defensive fragility.

Since Smalling's introduction, Roma have conceded seven goals in eight league games, one fewer than what they managed without him in their first four outings. He remains only one of two Serie A defenders who have yet to be dribbled past this season. His confidence in the process makes him look increasingly at home in the Italian top flight.

From the defender's point of view, in a time where his performances had come under even harder scrutiny due to United's recent underachievements, a move to Serie A was a win-win. He has broadened his horizons and learned a different approach to defending, while his team-mates have likewise benefited from his vast Premier League experience to perfect their movement on the pitch. Mert Cetin, a summer signing who was playing in Turkey's second division, thrived under Smalling's wing on his victorious debut against top-four rivals Napoli.

"I like to push up high, play high up the pitch, and the manager wants us to be high," Smalling told Roma's club website. "I am a defender that likes to defend on the front foot so I think this is the perfect type of football for me."

'He has won over the Roma fans'

Sky in Italy's Roma correspondent Angelo Mangiante said: "The public at Roma has a lot of expectations, but they started appreciating Smalling immediately. He has won over the fans' credit and consensus - that is very important and I assure you that it's not easy to do it this quickly. When new signings fail to convince, people start clamouring and also whistling. But he took up a role as the defensive leader immediately. 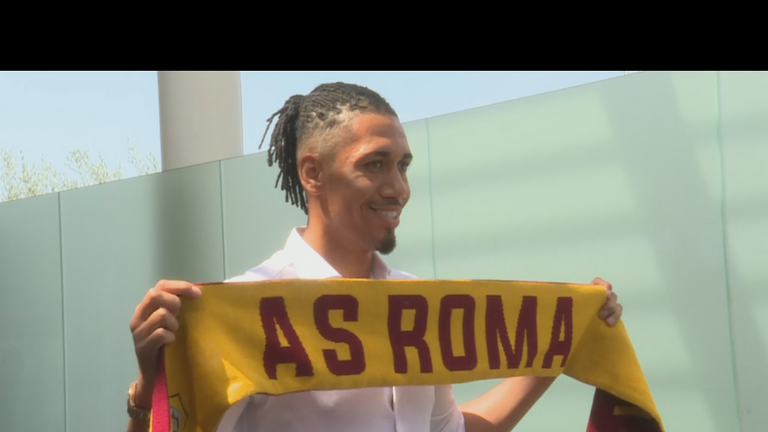 Chris Smalling says he's always had a desire to play abroad for a club like Roma with 'big aspirations', after sealing his season-long loan move from Manchester United

"Roma don't play a conventional style of Italian football. Fonseca's backline is very high, and Smalling is very quick and good at recoveries. He's playing like a great defender and a leader with personality - even when Roma lost to Parma on Sunday he was the best. He's in full growth, since he arrived at Roma he has never played a bad game, never. This proves it's the type of football that suits him most.

"Now he is learning Italian and I believe that is a sign that he is keen to stay. He was always very professional in his interviews, saying his future is in the hands of 'his club' - United - and Roma. He took up the number 6 shirt, which was retired for a period after legendary defender Aldair left the club, but I believe he can follow his footsteps and at 29 years of age, he has everything it takes to be a mainstay at Roma for the next four seasons."

Smalling's last England call-up came in October 2017 for the World Cup qualifiers against Lithuania and Slovenia, before being dropped in November that year due to concerns over his passing ability. "We want to play in a certain way," said Southgate at the time.

It was also the then-Manchester United man's inconsistent performances that failed to earn him a return to St George's Park, but it now feels like he's in a much better position to force his way back into Southgate's plans. It's not just the 10 Roma appearances full of consistency: Smalling ranks in the league's top 10 most accurate passers, something which is likely to catch Southgate's eye.

The England boss has yet to start the same back-line in consecutive games since the end of the World Cup in Russia, and has picked 12 different players to start at centre-back during his tenure. In the past couple of months, some defensive frailties have been exposed with England shipping five goals over two qualifiers against Kosovo and Czech Republic.

The spot at centre-back alongside Harry Maguire remains very much up for grabs - with Joe Gomez, Michael Keane and Tyrone Mings getting opportunities to stake their claims. Fikayo Tomori is a new face in the camp and John Stones has been given a new chance after the Nations League finals in June, but while Southgate admitted Smalling is still on his radar, he says there is "no point" in calling him up now.

"We will monitor that," said Southgate. "It's important, whenever players are playing abroad, we've got to be across it. It's good from Chrissy's point of view that he's settled as well as he has, having left Manchester United.

"There's opportunity, but it wasn't one we thought of for this month. There's no point bringing Chris in - he has a lot of caps, and if we were bringing him in, it would be to play. It wasn't a consideration - for this time."

The tables have turned this season. Smalling, who at 29 is arguably in his prime as a centre-half, is now back on par with England's finest defenders on current form. If he manages to maintain the consistency he has shown in Italy so far, Southgate will have little choice but to consider him as a potentially central piece of the England jigsaw for next summer.