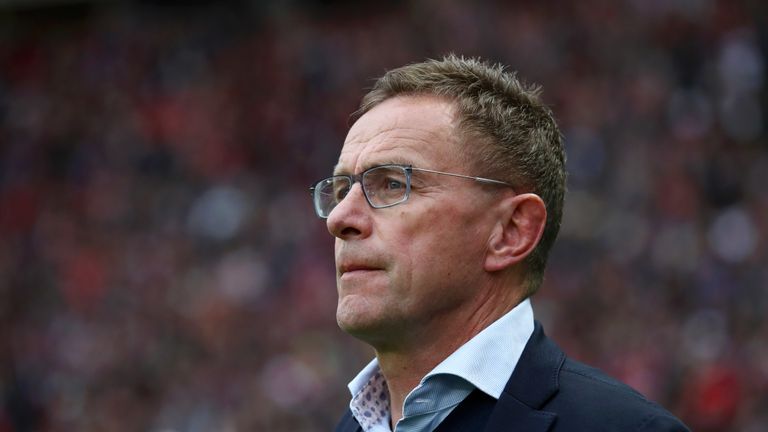 Ralf Rangnick believes Liverpool target Takumi Minamino is in Jurgen Klopp's mould, with the Red Bull Salzburg attacking midfielder on the verge of completing a move to Anfield.

Liverpool are in talks to sign Minamino for £7.25m when the January transfer window opens, subject to a medical, and Red Bull's head of sport and development has told Sky Sports News the 24-year-old has been given the perfect football education for a potential spell at Anfield.

"The style is very similar to Jurgen's," he said. "It's proactive, it's high pressing, counter-pressing. Once we have won the ball we don't want to waste any time by square passes or back passes.

If Liverpool sign Minamino, he will be the fourth player Jurgen Klopp has signed from the Rangnick production line- with Brendan Rodgers' signing Roberto Firmino also playing for Rangnick at Hoffenheim.

Rangnick added: "It's definitely no coincidence that he has four former players of mine (Firmino, Naby Keita, Sadio Mane and Joel Matip) because it shows that he is, in fact, looking for the same kind of players, with the same assets, with the same mentality as we do. And, I think, out of the top clubs in Europe, he's probably the coach with the highest number of former players from us."

"He doesn't have to thank me!"

Given the brand of football Rangnick, now overseeing Red Bull's teams in New York and Sao Paulo, has introduced at his clubs, it's clear why the players he's nurtured suit Klopp so well.

Minamino is clearly a player who buys into that philosophy. While no longer involved with Salzburg, Rangnick was their sporting director when they signed him from Cerezo Osaka in 2015. This season, Minamino has scored nine and provided 11 assists in 22 games.

"You could see he was good on the ball, very technical, good mentality. He is also like many Japanese players, willing to invest in the team's efforts to win the ball back.

"Of course he had to learn those things tactically, but his willingness and his mentality was already there. He's not the kind of player to say, OK the other team has got the ball so, please let me know once we have the ball so I then can take part in the game again. Even at the age of 19, you could see he was a good boy."

You could argue there is an inevitability that Rangnick, who combined the roles of sporting director and head coach at RB Leipzig last season, will end up in English football.

His connection goes back to his days studying at the University of Sussex where he watched Brighton at the old Goldstone Ground one week, and Arsenal at Highbury the next.

Since then various possibilities to work in English football have presented themselves. In 2013 he was interviewed for the Everton manager's job. The year before it was West Brom.

Then in 2016, he was down to the final two in the race to become England manager, only for the FA to go with Sam Allardyce.

Now, with 18 months left on his contract at Red Bull, Rangnick is being linked with roles at both Manchester United and Arsenal, the attraction of both clubs undeniable.

"Of course any big club in England should be attractive, but also there has been no contact between the relevant clubs and myself."

"I'm very happy and my full focus is on my job at Red Bull. Should that change it takes a lot [not money] because I'm more than happy with what I'm doing now."

So what would it take to tempt him away?

"If I look back on the last 14 years, six years in Hoffenheim and eight years with Red Bull, they were extremely successful and in each club I was a builder, developer and, at times, head coach for the relevant teams."

"Should I take into consideration to work for any other club it needs to have a similar scenario and a similar opportunity to have the authority to develop things in the club because, if I only work as a head coach or only as a sporting director, it will be only 50 per cent of what a club could get if I'm working in both positions."

Last season RB Leipzig benefited with a third-placed finish in the Bundesliga and an appearance in the German Cup Final. More crucial, however, is the structure left in place for long-term success. A blueprint for others to follow.