Bruno Fernandes could become a Premier League star - but new signings have failed to kick on at Manchester United and that is something Ole Gunnar Solskjaer must address, says Jamie Redknapp.

United had been chasing the signature of Portugal central midfielder Fernandes for much of the January transfer window and eventually sealed a potential £68m deal with Sporting this week.

Fernandes could make his debut in United's Saturday Night Football clash with Wolves but if he is to be a long-term success at Old Trafford, Solskjaer and his coaching staff must provide a better platform for him and the rest of the squad, says Sky Sports pundit Redknapp.

"I saw him last summer in the Nations League and I was very impressed with him. He got 20-odd goals from midfield last season and he's got an unbelievable strike from distance. If you look at his numbers they're amazing.

"Frank Lampard is the best I've ever seen for scoring goals from midfield but this guy is doing it as well. 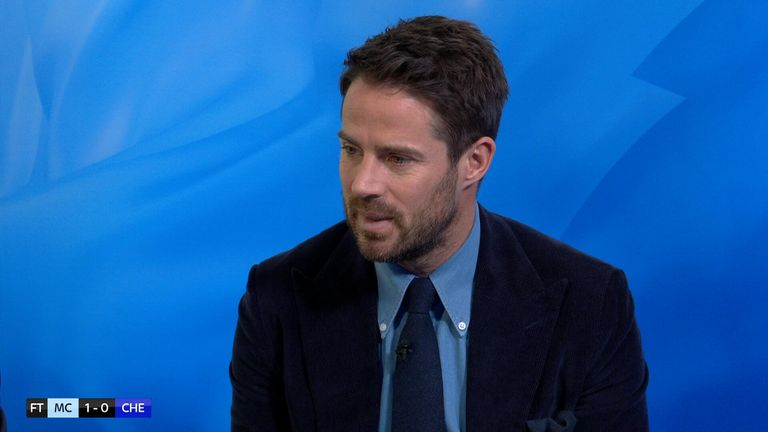 Right now Manchester United have an amazing record of making good players turn into bad ones.

"But what you have to remember is, right now United have an amazing record of making good players turn into bad ones.

"They've got to look after this guy because he's a super player. But the players they're signing have got to perform better and they have to find a way of getting the best out of these players.

"I don't subscribe to this theory they keep signing bad players, they're just not working correctly with these players and they need to create an environment where these players know if they're not doing well enough and not just be able to turn it on when they want.

"And that sometimes comes down to the manager."

Redknapp believes Solskjaer's iconic status at United has protected him from harsher criticism for the team's struggles on the pitch but warned the club's wider problems could see them making the same mistakes Liverpool did in the early years of the Premier League era.

"I've said it for a while - the heat on Ed Woodward etc does him a favour. It takes the pressure off of him," said Redknapp.

"But the results since he's been there have not been good enough. They've got players, they've bought players… yes, they've been a bit unfortunate without a striker because they've lost their main man Marcus Rashford. But what you can't do is just keep throwing money at the problem.

"Sometimes you've got to go, 'we've got young players here'. They let Romelu Lukaku go, which at the time seemed a good decision because they were trying to change the way they play, but they'd be in a better position now if they had him.

"It's very similar [to the Liverpool situation after their last title win in 1990]. You start to chase it, you try to buy players and create an environment and change managers all the time, which is what Liverpool did.

"I'm not saying it's going to take 30-odd years for them to win the league again but it takes a long time to get over all that success with Sir Alex Ferguson. Now they've had three or four managers in this period and none of them seem to be getting it right. They've certainly thrown money at it but they've not created what they had before and that was the team ethic, the team work and desire you need to be a Manchester United winning team."

Manchester United and Wolves have met three times already this season, with a 1-1 draw in the Premier League at Molineux followed by an FA Cup tie and replay, which eventually saw United progress.

Redknapp is expecting a similarly close game this weekend, with Nuno Espirito Santo's well-drilled side set to cause their hosts problems at Old Trafford.

"This is a tough game for United," said Redknapp. "They're playing against a team in Wolves who know exactly what they're doing, they know their system… if you asked Solskjaer what's his best team, what's his best system, he doesn't really know the answer to that.

"But it's completely different to Wolves. They'll cause them a lot of problems. They've all been close games but I think Wolves could get a draw there.

"They'll make the Manchester United fans edgy and the way they play is organised, good players. It wouldn't surprise me if they got a point at all."