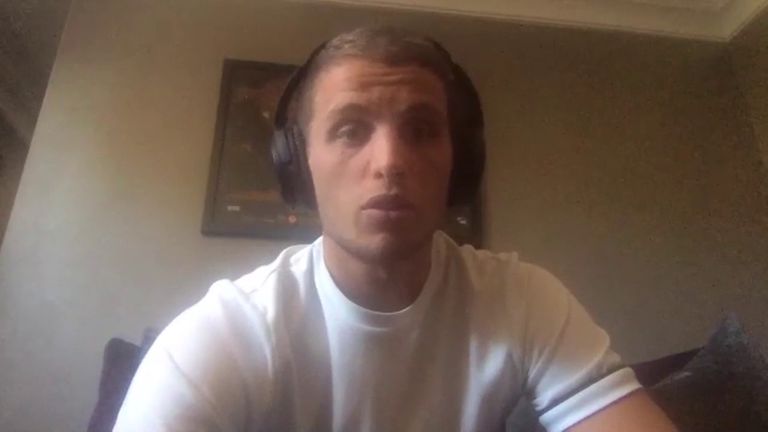 It will go down as one of the most remarkable Youth Cup finals in history.

"Fulham had some top players. Moussa Dembele, Roberts, Emerson Hyndman in midfield. They were 3-1 up in the first leg. We managed to score to make it 3-2 in the 88th minute or something like that. Looking back now it was a massive goal.

"The final at Stamford Bridge was a crazy game. There probably won't be another one like it. Our team talk had been don't let them score early and we came out and conceded after four minutes!

"We got two to lead but they then led 3-2 and this was in the first half! We managed to get three in the last 10 minutes of the game to win 7-6 on aggregate."

In a wide ranging interview with Sky Sports News Houghton explains why he decided to raise thousands of pounds for NHS charities, reveals the player that was on "another level" at Chelsea and explains why he is benefiting from the skills of a sport psychologist.

That night in 2014 he was among the scorers in front of a watching Jose Mourinho and in a team that included current Chelsea players Andreas Christensen and Ruben Loftus-Cheek. He has also played with Tammy Abraham, Mason Mount and Fikayo Tomori as he started his career in the Chelsea academy.

"The likes of Tammy, Mason, Fikayo coming in for their first season and have been among the best players so it shows the young lads can do it when trusted."

Loftus-Cheek has not featured in a game this season due to a back problem but his former team-mate is convinced about what kind of impact he can make on his return.

"I started with Ruben when we were nine years old so it's nice to see him doing well," Houghton says. "Hopefully he can come back from his injury quickly and hit the ground running because he's going to be a real top player for Chelsea and England. He's a special talent."

He is also clear about his Chelsea experience and what it is like seeing the younger players get a chance under the club's all-time leading goalscorer.

"I had 12 or 13 years there and had an education, I was learning and growing into a man. I had amazing opportunities and memories from that youth career, getting to train with great players in the first team and amazing managers.

"There have been good times and it's made me into the person I am now so I'm very grateful for all the amazing staff and coaches I've had and I'm pretty lucky to be where I am now playing football as a job."

He recalls training with the first team between the ages of 15 and 20.

"I always remember Deco was playing at the time and it felt like he was on another level," Houghton says. "All these tricks, he was a top player. In the time I was there no one came close to Eden Hazard. He was just unbelievable and he could just turn it on at any time.

"Most players need to be at it constantly whereas he could come out with baggy trousers and just run round the whole team!

"John Terry and Didier Drogba were so helpful, Michael Essien, David Luiz were top guys. A couple of them I now see as football friends. They were idols growing up so to still be in touch now is surreal."

During lockdown he has put his time to good use along with wife Harley and together they have raised almost £3,000 for NHS charities.

He added: "It came from not really doing anything and feeling helpless in this situation. We thought we could reach out, especially to the MK Dons and Chelsea fanbase.

"It's a relatively small amount in terms of people like John Terry but a small amount goes a long way and if a lot of people do that it will help a lot."

Houghton checks in regularly with MK Dons team-mates via WhatsApp, while manager Russell Martin hosts team meetings on video call. He has offered the players the use of a sports psychologist, something the 24-year-old is already familiar with.

"I had a few injuries at the start of my youth career and I've gone back to the same guy," he says. "It's an aspect of the game that people don't know too much about and are quite naive to it. I was myself and it's only when you actually sit down to chat you realise how it can help.

"If you talk to the people who have been at the top of the game they say a large chunk of success comes from your mental strength in the game.

"The guy I've been working with suggests having something written down or a cue on your hand or arm. It's a visual cue as opposed to having to think about it because obviously in the game it's hectic and you probably forget.

"It can help in this lockdown period because you have a lot of time sitting around doing nothing so you do tend to overthink."

MK Dons were five points clear of the League One relegation zone before football was suspended but before the battle can recommence Houghton is urging caution.

"For me personally I would want to go back but it has to be right for all the players in terms of health. That's the main thing. We can't be going back and risking our lives or other lives," he insists.

"Football isn't the be-all and end-all. You think of your own family, your parents who might be in that higher risk category even if you still see them as young parents, so it's a difficult time. We have to be sensible."