Ansu Fati: Why Barcelona wonderkid is the next big thing

Ansu Fati is the street footballer, the precocious untrained talent that is the talk of La Rambla, writes Sky Sports' Ben Grounds

The brimming well that is Barcelona's fabled La Masia training academy has somewhat dried up in recent years, but when it comes to Ansu Fati, the hype is real.

The Guinea-Bissau-born left winger, still almost five months shy of his 18th birthday, was mentioned as part of a swap deal involving Juventus' Miralem Pjanic last week, but Fati was declared non-transferable a long time ago.

It has been a convoluted and disrupted season for many reasons at Barcelona, but one that will fondly be remembered by one of the world's most exciting prospects, and a player who is destined to fill many column inches over the next decade and beyond.

Recently, when asked by Jamie Carragher on the Football Show who Barcelona's next superstar might be, Spanish football expert Graham Hunter was effusive in his praise of the youngster's temperament and innate ability.

"There's not as wide a supply of characters coming through as was once the case but when you watch Fati you see his pace, his ability to play and finish off either foot. When a big moment comes, some people get a bit jittery and some people go stone cold.

"How he matures and what his attitude to sudden wealth and profile is will determine whether he becomes an absolute stock superstar of European football."

"He's deeply exciting. How he matures and what his attitude to sudden wealth and profile is will determine whether he becomes an absolute stock superstar of European football in the next eight to 10 years but the repertoire, the mentality is there and, this is absolutely vital, Lionel Messi adores him, thinks very highly of him.

"You watch him in training, and now we get access to footage of training more than ever before. Messi's regard for Ansu Fati is different from how he feels about a lot of the players that have been brought into the club.

"That is an enormous pair of shoulders to stand upon."

Can Fati manage the weight of expectation?

Very little is certain about Barcelona's future, with the current condition of the club described by Hunter described as a "mess", but the club will certainly hope its rich tapestry becomes intertwined with the future of their most coveted youngster.

Josep Maria Bartomeu's failure to reorganise the club and his front-page salary cut battle with Messi was played out like a soap opera, so Fati's incredible potential cannot go to waste. 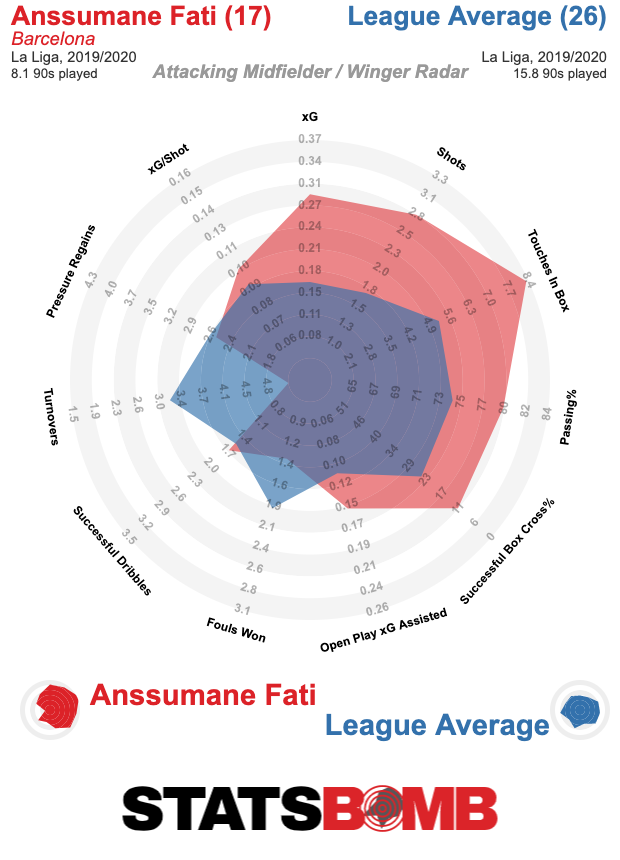 For that to happen, he must rise above Bartomeu's administrative failure and attempt to replace Messi as the jewel in the crown. The wheels are in motion for the perfect environment in which that can take place.

Former Barcelona president Joan Laporta has announced his intentions to contest the 2021 presidential elections - and it is widely regarded that Xavi Hernandez will return to the club as head coach should Laporta be re-elected.

The club won 12 trophies in his seven years as president, and during the latter stages of his reign, he paved the way for some of the most successful seasons in the club's history.

Xavi, along with Carles Puyol, Victor Valdes and Andres Iniesta owe their careers to Laporta for his emphasis on youth and frugal spending - and Fati will shoulder the burden of expectation on him to follow in the footsteps of those giants. 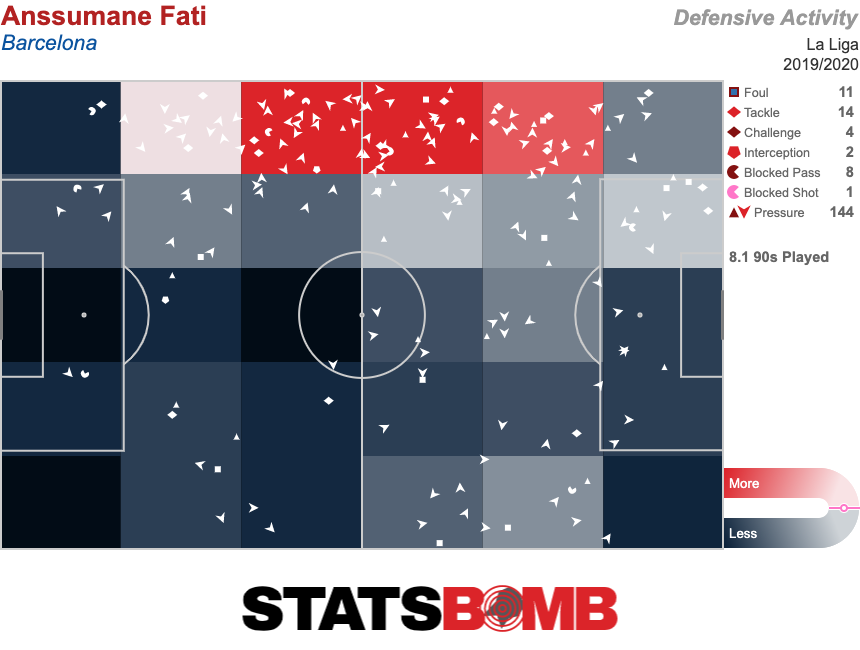 Fati is the street footballer, the precocious untrained talent that is the talk of La Rambla. And the records have tumbled.

The third-youngest player to score a goal in Spain's top-flight behind Fabrice Olinga and Iker Muniain, it is now hard to imagine that the teenager could well have left the club last summer.

Having spent his childhood in the playgrounds of Bissau, the west African nation of Guinea-Bissau's capital, Fati has elevated himself from the ground to the pinnacle of the game.

Only last summer, he was among those La Masia graduates who were considering whether they needed to leave Barcelona in pursuit of first-team opportunities abroad. But with both Manchester clubs circling, the Catalans instilled their faith in the player.

A three-year contract extension was agreed with the option of a further two years in addition to an eye-watering €100m release clause and the promise of a regular place in the B team.

The making of a star

Fati's very first coach at Herrera, Jose Luis Perez Mena, knew after witnessing him play for the first time that the club had someone special in their ranks in 2007.

Speaking to agency EFE, Perez Mena, the director of the club's football academy in Seville, recalled: "In Guinea he was used to playing with balls made of rags, but when he got a real ball for the first time it was incredible to see him.

"I've been in the football game for 50 years and I've never seen anything like him. He's got huge personality, he doesn't fear anyone and you only need to see him on the pitch to see that."

At the age of eight, Sevilla academy director Pablo Blanco enrolled him at the Andalucian club.

It wasn't long before scouts from across Europe paid regular visits to see Fati in action, with Barcelona prising him to the Nou Camp two years later in 2012, despite interest from Real Madrid.

It was at that stage in his formative years, aged just nine, that he formed a devastating relationship on the pitch with Japanese prodigy Takefusa Kubo for the club's U12s, scoring a combined 130 goals in their first season.

Fati's rise is all the more remarkable given the obstacles he would face over the next three years, a crucial time in the development of young players.

Barcelona were banned from registering foreign players during the 2014/15 and 2015/16 seasons as a punishment for buying underage players.

Kubo was forced to leave the club and return to Tokyo, but he has since joined Real Madrid and is currently on loan at Mallorca.

The pair remain friends, and while Fati stayed on and subsequently suffered an injury to his tibia and fibula, he kick-started his ascent while representing Barcelona's Juvenil-B side in 2016/17.

He was swiftly promoted into the Juvenil-A team - and he was the team's top goalscorer during the 2018/19 season.

By now, his talent was the worst-kept secret in Spain, and an impressive pre-season with the senior squad last summer led to calls for him to be included in the first team this season.

Injuries to Messi, Luis Suarez and Ousmane Dembele meant that, at 16 years, 11 months and 25 days, Fati was fast-tracked to become Barca's second-youngest debutant with a 15-minute cameo in the 5-2 win over Real Betis in the second league game of this season.

A week later, he became the youngest ever player to score a league goal for Barcelona when he netted an equaliser for the La Liga champions at Osasuna, aged just 16 years and 304 days.

Will Fati succeed where other pretenders have failed?

Barcelona must rebuild at a time when their prodigy is breaking through, and while the next stage may be to pin down a definitive position, it was famously said of Messi by Xavi that he could probably play in goal.

"His quality is that he can play in all of the attacking positions," Albert Puig, La Masia's former technical director, said.

"It's very important - this kind of player who plays so freely on the streets for hours and hours. It was the same with Messi as a kid, although Messi is obviously different in other aspects. Added to this. his natural talent helps to make the player he has become."

There have been previous young debutants who have struggled to live up to the hype as Messi's successor - Bojan Krkic, Gerard Deulofeu, Marc Muniesa and Adama Traore have all departed despite encouraging starts.

Quique Setien will be focused on securing Barcelona a fifth La Liga title in six years - and a first Champions League trophy since 2015 - but to the locals, it cannot come at the expense of Fati's continued exposure to opportunity.

Suarez will be fit once the season resumes, but Dembele remains out after undergoing surgery for a hamstring injury - but whereas Fati may have earned his chance through their misfortune, he now stands shoulder to shoulder with those illustrious names.