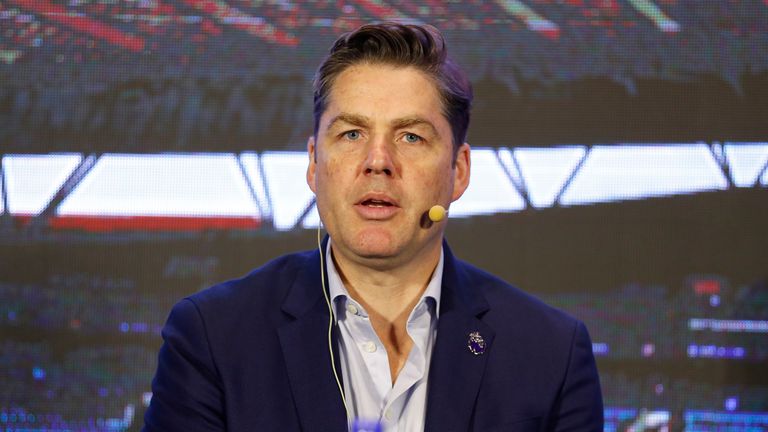 The Premier League's chief executive Richard Masters has urged supporters to stay away from stadiums, even in times of great celebration such as winning the title or surviving relegation

Premier League chief executive Richard Masters has urged supporters to "stick by the rules" and not be tempted to congregate "even in moments of high celebration".

After a 100-day absence the English top-flight season will resume on Wednesday, live on Sky Sports, following the suspension of football due to the coronavirus pandemic in mid-March.

The Merseyside derby, one of several matches considered a risk by police, was cleared to be held at Everton's Goodison Park in midweek, while league leaders Liverpool will play their remaining home matches at Anfield.

The option of staging matches at neutral venues was discussed as part of 'Project Restart', but clubs opposed the proposal.

Liverpool can win their first league title for 30 years by beating Everton - if second-placed Manchester City lose at home to Arsenal on Wednesday.

"There's been a lot of hard work to get us to this point, a lot of consultation, but obviously the prize is really completing the season," Masters told Sky Sports News.

"Being able to restart is great, but we hope to complete in around six weeks' time.

"There will be some very clear messages coming out of all clubs in the build-up to the first matches. During those match environments, stay at home, follow the games on TV, listen on the radio or follow on social media.

"The same goes for the aftermath of games as well. Keep yourself safe, don't put yourselves or others at risk even in moments of high celebration.

Whether it be surviving relegation or winning the Premier League, fans should be aware that they've got to stick by the rules

"It's going to be a great moment but the job has still got to be completed.

"Whether it be surviving relegation or winning the Premier League, fans should be aware that they've got to stick by the rules."

Masters also said initial conversations have begun over how clubs will be able to welcome back supporters to their grounds during the 2020-21 season, which is expected to start in September.

"We'd like to see fans back, even on a phased basis, as soon as it is safe and appropriate to do so," he said.

"We've started discussions with other sports and with government about that. There are no timescales set and it would be inappropriate for me to talk about them, but we are confident that will happen next season."