Harry Maguire's struggles on and off the field continue as he was sent off in England’s Nations League defeat against Denmark at Wembley.

Two yellow card offences in the first half, both for studs-up lunges, will raise further questions about the Manchester United captain.

It was only in August that Maguire was found guilty of aggravated assault, resisting arrest and attempted bribery on vacation in Greece.

Although he is appealing the decision, it still resulted in his omission from the subsequent England squad.

This latest error on the field, after a poor start to the Premier League season with United that has included a 6-1 home defeat to Tottenham, will only add to speculation the off-field issues are impacting his form.

"It is a terrible time for him.

Maguire could have no complaints about the decision of referee Jesus Gil Manzana.

He went into the book early on for a nasty tackle on Yussuf Poulsen.

"He lunged in," said Neville. "It was not a good one. I think he is lucky because they are the ones that do break legs, Harry Maguire's whole body going into the ankle."

He then repeated the error by going to ground once more to earn the second yellow card - fouling Kasper Dolberg when attempting to recover after a poor first touch.

"I thought he was lucky with the first one, it was between a yellow and a red," added Neville. "The second one was just scruffy play by him. That touch, really slack, and then the follow through as well.

"He makes the first mistake but then don't make the second mistake. That is the rash part. He has got nowhere to go with it, the Spanish referee.

"It really is a lesson to all young defenders or anyone who finds themselves in those positions. You will make mistakes but do not go and lose your composure and make that second one. It is easy to do. We have all done it." 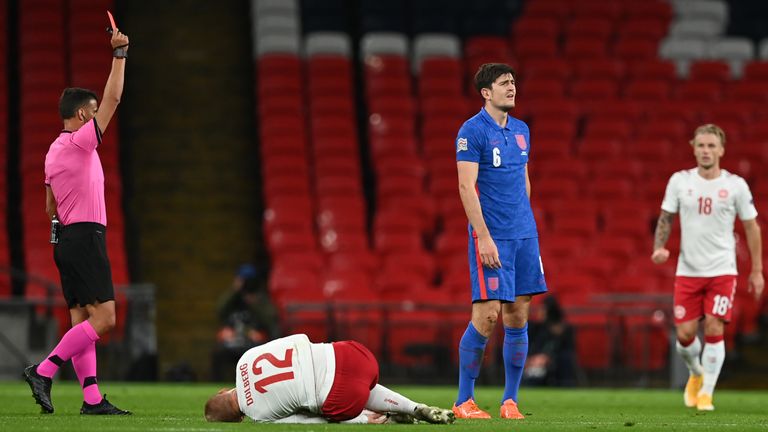 Even aside from the fouls, Maguire was struggling.

While England's combination play on the right was positive, little progress was on his left flank.

"I think what goes unnoticed when we talk about Mason Mount and Reece James on that side is that, actually, Kyle Walker stepping in just gives them that service coming into them with real quality," Neville explained.

"They have not got that on the left-hand side. It is a little bit more awkward. Here, on the other side, they are just having to go backwards and then out again."

Right now, it seems nothing is going Maguire's way, but speaking from the Sky Sports studio, Jamie Redknapp has only sympathy for the player's plight.

"I feel sorry for him," Redknapp told Sky Sports. 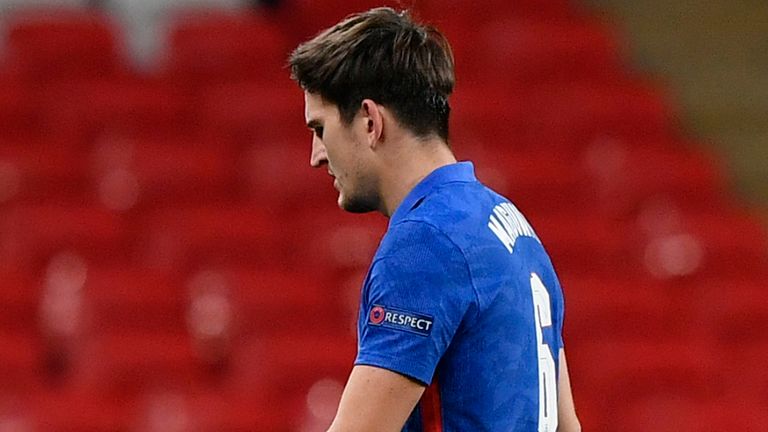 "It would be easy for us to sit here and rip him apart but he is having a moment. He is having a really bad moment in his career that he is going to have to somehow pull himself together. He has got to get his confidence back.

"There is a lot going on in his life. You can see he is struggling with his game at the moment.

"Right now, his confidence is on the floor, it is obvious to see. He is making mistakes that I didn't see him making a couple of years ago.

"He has got a lot on his mind, there is no doubt about it, and there is no use brushing it aside. Some players can handle it, some players can play with things going on in their social life and it doesn't bother them. [The pitch] is their sanctuary. But others can't. They go out there and carry it onto the pitch.

"We are very quick to judge with people ripping him apart on social media saying it is the worst England display they have seen but you don't know how someone feels when they walk on the field.

"He has got to pick himself up. He has got to show something. He will need a good support system around him. I have no doubt that because of the man that he is he will get through this."

"The first yellow was a challenge that he did not need to make and that puts him on edge," Southgate told Sky Sports. "The second one is an interception and his momentum takes him through and into the player.

"For me, he is a top player and a massive part of what we do. He is having a period where he is getting a lot of stick thrown his way. He is big enough to deal with that and he will be stronger for it. He has our full support and I know his club will be the same

"When you are a bit older you can rationalise it, you have experienced it before and you can move forward with it. He is experiencing it really for the first time.

"Not that he has never had setbacks before because no player gets to the level that he is at without having had setbacks but his profile has changed over the last couple of years because of the club he plays at and the success he has had with us.

"He is having one of those period where things are going against him but you have to hang on in there and things will turn."