English football fans returned to stadiums in Championship, League One and League Two fixtures for the first time in 266 days; Over 10,000 fans were allowed across six games; Supporters allowed to sing in support but must remain socially distant 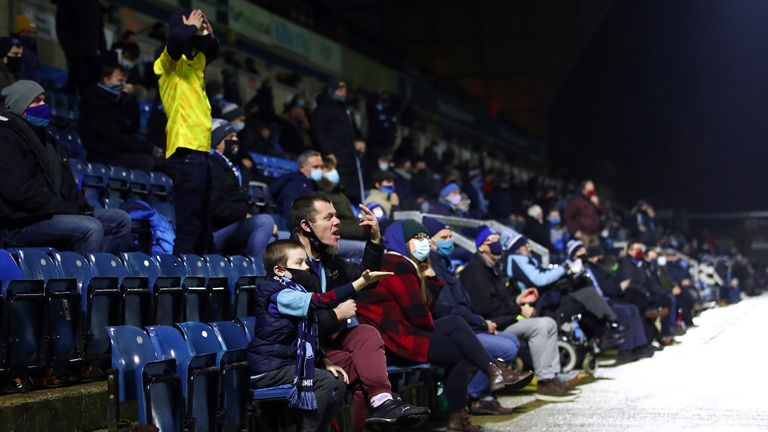 After 266 days away, fans of Luton, Wycombe, Charlton, Shrewsbury, Carlisle and Cambridge were able to watch their team in EFL action on Wednesday night

Fans returned to English Football League matches for the first time in 266 days on Wednesday as clubs in tiers one and two welcomed back supporters.

Limited crowds were permitted to attend at Luton and Wycombe in the Championship, Charlton and Shrewsbury in League One and Carlisle and Cambridge in League Two, after nationwide lockdown restrictions in England ended on Tuesday.

EFL clubs in tier three areas continued to play their games behind closed doors on Wednesday.

Carlisle's Brunton Park was the first EFL ground to open their turnstiles in the early kick-off against Salford City in League Two.

Around 2,000 fans at Brunton Park cheered on as Lewis Alessandra opened the scoring against Salford in their 2-1 win.

Charlton then welcomed 2,000 fans back at the Valley but fell to a 1-0 defeat to MK Dons.

At the same time Wycombe's defeat to Stoke in the Championship and Shrewsbury's win over Accrington took place in front of around 2,000 fans, with Cambridge United's home loss to Mansfield the other fixture with a crowd in League Two. After almost nine months without football fans in stadia, Arsenal are preparing to welcome back up to 2,000 supporters on Thursday for their Europa League game against Rapid Vienna.

Thursday will see Arsenal become the first Premier League side to play in front of fans again when 2,000 will be allowed in to watch their Europa League game against Rapid Vienna at the Emirates.