Gareth Southgate defended his cautious approach to England's 0-0 draw with Scotland despite "not hitting the levels we need to" in a poor performance at Wembley.

Southgate used only two of his five substitutions during a game in which England managed only one shot on target throughout and were outplayed by their visitors, who are the third-lowest ranked side at Euro 2020.

England stuck with their original shape while bringing on like-for-like replacements for Harry Kane and Phil Foden in Marcus Rashford and Jack Grealish, as they moved onto four points from their opening two games, which will likely secure qualification from Group D. 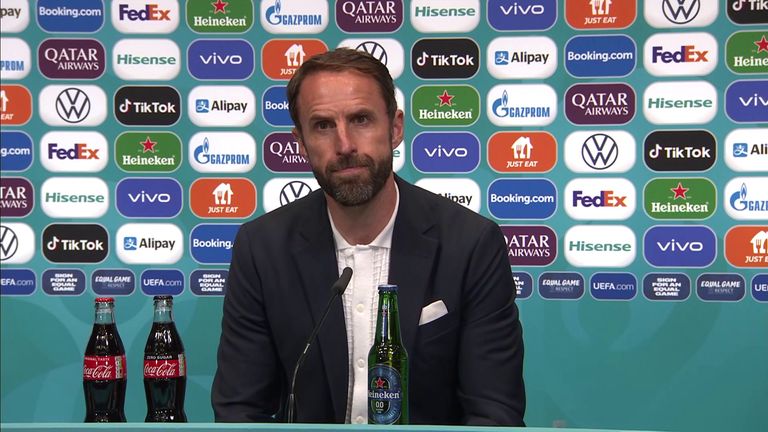 Gareth Southgate defended Harry Kane's display during England's 0-0 draw with Scotland, insisting it was the whole team who could not come up with the answers at Wembley.

But after England were booed off by a section of the home support after one of their poorest competitive performances of his reign, Southgate said he would accept any criticism aimed at his decisions as his side missed the chance to secure their place in the last-16.

"It feels difficult in the last 15 minutes of a game like tonight where fans are desperate for you to go forward and abandon shape, because it's Scotland, it feels like a unique occasion, but we have to still approach it that a point is still an important step towards qualification, which ultimately is the first objective for us," said Southgate.

"I think in those moments, if we had to chase to win with no consequence for conceding, you might approach it differently; but all the time, it's a night where it was a bit frantic, it wasn't a game with a huge amount of control, and you have to make sure that sitting on three points as we were, you manage the tournament as well as the game.

"It's easy to gamble towards the end, and lose shape, and then end up losing the game in the last five minutes, then you're kicking yourself for not managing the tournament. I understand we're at Wembley, we wanted to win, but in the context of the tournament qualification is the most important thing.

"There's a lot of young players who need the support of everybody - most of them haven't been involved in a game like that before, they'll learn a lot and bounce back from it, but they need everybody behind them."

Clarke: You wouldn't have known who was favourite 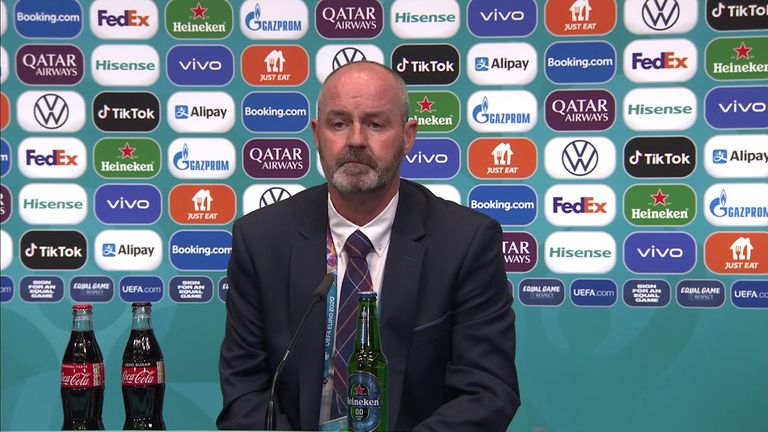 Scotland's Steve Clarke was pleased with his players for turning things around in their 0-0 draw with England, following criticism over his side's display in their Euro 2020 opener against Czech Republic.

Steve Clarke made four changes from a poor opening defeat to the Czech Republic and was vindicated by a performance matched by the quality of football produced at times by his side.

Speaking to ITV after the game, Clarke said: "It was a good night, we played well. We were unfairly criticised after the game on Monday; I know I have a good group of players and they showed that tonight, so I'm delighted for my players and staff.

"We had chances to win, England had moments as well, but looking at this you wouldn't have known which is the favourite which is a credit to us. The most pleasing thing was we played when we had the ball and created a number of chances."

Billy Gilmour was given his first Scotland start for the Wembley showdown and rewarded his manager by picking up the man of the match award, although Clarke felt Stephen O'Donnell had shaded the 20-year-old Chelsea midfielder on the night.

He said: "Stephen O'Donnell was exceptional, and Billy was just behind him. It was nice for him to get that start, a big platform, a big player, Billy.

"I've said for a long time he'll be a big part of the future of Scottish football. We know what we've got in the camp, we'll try to manage that and keep a lid on things. Performances like that will do him no harm whatsoever.

"Getting Kieran [Tierney] back into the three and Scott [McTominay] gives us the platform to build from the back. Billy and Callum are both good footballers, we knew coming here we couldn't just sit and defend for 95 minutes, we knew when we had the ball, we had to take care of it and try to create our own chances. That's what we managed to do."

Kane: 'We weren't at our best', Robertson: 'We deserved more'

England captain Harry Kane put a brave face on his country's performance despite being substituted himself after a poor personal showing in attack, while opposite number Andy Robertson, one of Scotland's star performers, said the Tartan Army had deserved maximum points at Wembley.

Kane told ITV: "A draw was probably a fair result. Fair play to Scotland, they defended really well, created a few chances themselves. It wasn't our best result, but it's another point closer to qualification.

"I think it was just a tough game. They defended really well, made great blocks at the right time, and that's football. It's the Euros, no game is going to be easy. They're playing for their lives and we saw that today."

Robertson was another to single out Gilmour's performance and suggested losing at Wembley would have ended their hopes of progression, with a win against Croatia on Tuesday now probably enough to see them into the last-16.

He added: "I think we did [deserve to win], I don't think many people can argue that. we had the big chances, at times we kept the ball superbly well, frustrated England and on another night could have come away with more.

"I'd put Gilmour's performance right up there. Nothing phases him. I believe he can have as many caps as he wants for Scotland. He's got a big future, but the here and now's pretty good for him too."

Gilmour expresses his pride after man of the match performance

Billy Gilmour expressed his pride after taking a Wembley point and UEFA's star of the match award on his first start for Scotland.

The Chelsea player said: "It was a great performance by the full team. We dug in really deep. We came here with a game plan, stuck to it, and did it really well.

"I was ready, I trained with the squad, all the boys have helped me settle in really well. To play against England in my first game, I'm so proud and to come here and do really well was even better.

"I found out (I was starting) in training before we travelled down, we had a slight idea, we were doing shape and set pieces but it wasn't until the last meeting before the game we found out the team.

"I had mum, dad and little brother, uncle and my dad's mates. My mate as well, he came down. I got them tickets. It was a good moment.

"It was amazing, the fans were incredible as well, singing from the first minute to the last. They gave us a massive boost. We knew we had to go on the pitch and give the fans what they wanted.

"The fans were brilliant. We could hear them singing from the first minute to the last. They stayed behind, we went over, they were amazing. We were already pumped up, motivated for this game. It was a massive game and we knew what we had to do."

Gilmour collected a Champions League winners' medal last month but only after sitting on the bench throughout the final and he played a central role against England.

"This one is definitely up there," he said. "Playing for my country I'm so proud, against England as well at Wembley. It's massive."

Podcast: A Scottish night to savour - but what's up with Harry Kane?

Twenty five years on from their last tournament meeting, Scotland sprung an upset of sorts with an encouraging 0-0 draw against England that keeps their Euro 2020 hopes alive. Alice Piper is joined by Luke Shanley, Jess Creighton and Peter Smith to examine exactly where Scotland got it right, before conducting the inquest into England's toothless display.

It was a Wembley performance for Scotland to savour as Steve Clarke's selection earns alibis from supporters and lays the foundation for Tuesday's "must-win" showdown with Croatia. But what's gone wrong with Harry Kane? Will Gareth Southgate drop his captain against the Czech Republic? Is it time for Jack Grealish?

We also hear from Sky Sports News reporter Geraint Hughes to reflect on Wales' triumph over Turkey in Baku before looking ahead to Sunday's final group game against Italy in Rome.

Scotland are back at Hampden Park for their final group game against Croatia on Tuesday. England take on the Czech Republic at Wembley on the same day. Both games kick-off at 8pm.

What do England and Scotland need to progress?

While England's current haul of four points should see them progress as one of the four best third-placed teams even if they lose to the Czech Republic on Tuesday, they need at least a draw to be absolutely sure of progressing and only a victory will be enough for them to go through as winners.

As for Scotland, nothing less than a victory over Croatia will be sufficient for them to have any hope of making it through to the last 16.

If Scotland win and England and the Czechs draw, Scotland should go through as one of the four third-placed teams.